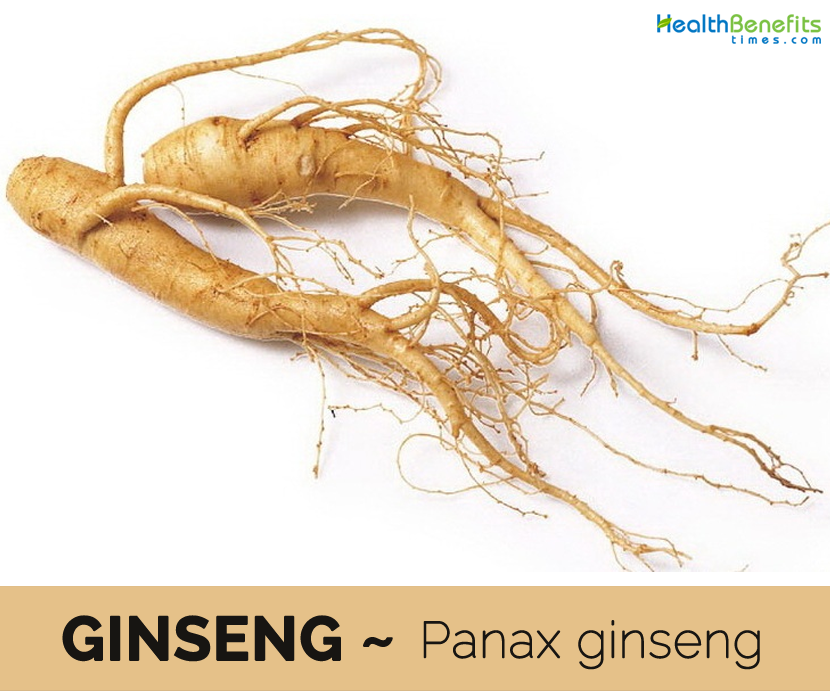 Ginseng scientifically known as Panax ginseng is actually a broad term that incorporates nearly a dozen different species of plants that fall within the Panax genus. Apart from ginseng it is also known as American Ginseng, Red Ginseng, radix ginseng, Asian ginseng, Chinese ginseng, Korean ginseng, or Oriental ginseng and ren shen. This highly appreciated plant, which has large fleshy roots (their main source of nutrients), is typically found in North America and certain cooler climates in some parts of Asia. Due to the global demand for this beneficial plant, it has been exported throughout the world. Root is the most medicinally valuable element of the plant, and can be purchased in dried, whole, or sliced form. The leaves of the ginseng are used on a far more limited basis, but they do have some uses.

There are 11 species of ginseng, all belonging to the genus Panax of the family Araliaceae. The botanical name Panax means “all heal” in Greek. The name “ginseng” is used to refer to both American ginseng (Panax quinquefolius) and Asian or Korean ginseng (Panax ginseng). The true ginseng plant belongs only to the Panax genus, so other species, such as Siberian ginseng and crown prince ginseng, have distinctively different functions.

Ginseng is a short, slow growing perennial plant about 1 to 2 feet in height. The plant prefers rich, moist deciduous woods and may also be found on rocky talus slopes and grows on the slightly acidic soil, loose, rich soil, with a heavy mulch of leaves. Ginseng plant has a spindle-shaped, slender root which resembles the human body and is 2 to 3 inches in length (occasionally twice this size) and from 1/2 to 1 inch in thickness. Ginseng is known as “len seng” in Mandarin, which means “root of man”, because of the unusual morphology of the root. Root is actually a main source of nutrient of the plant. The plant has smooth, erect stem.

The plant has 3 large, palmate leaves composed of 4 to 5 (occasionally 3 to 7) oblong or lance-shaped leaflets with toothed edges.

Ginseng produces yellow-green flowers arranged in umbels (umbrella-shaped inflorescence). Flowers grow from the axils of leaves and contain both types of reproductive organs (perfect flowers). It blooms from June to July. Flowers are fragrant and they attract bees and syrphid flies, which are responsible for the pollination of this plant.

Containing more than 40 different ginsenosides, ginseng is considered a cure-all herb which is useful in treating a variety conditions. In addition to its anti-inflammatory, antioxidant, anti-cancer, and immune-boosting properties, it may also improve blood circulation, nurture the nervous system, and even help to balance hormones. Listed below are few of the health benefits of ginseng

Several researches have proven that ginseng possesses powerful anticancer properties because of its ability to prevent tumor growth. Although more research is required on this subject, reports conclude that it’s the improvements in cell immunity involving T cells and NK cells (natural killer cells), along with other mechanisms such as oxidative stress, apoptosis and angiogenesis that give ginseng its anticancer properties.(1)

Ginseng consists of powerful combination of chemicals which have a wide range of effects, including the suppression of appetite. When dried or powdered ginseng is consumed, it rapidly suppress the “hunger hormones” from activating any cravings, thus helping people in their weight loss efforts from cheating or snacking in between meals, while delivering a range of other health benefits at the same time.(2)

Ginseng affects the body’s nervous system in various ways, including stimulating the metabolism and boosting energy levels. Both of these effects can help to reduce stress and anxiety in the body. Additionally, the adaptogens found within ginseng have been shown to alter the hormonal levels of the body, which help to lower stress hormone levels and achieve a better balance of mood in the body.(3)

There are several researches on diabetes management and prevention, but one of the most promising herbal remedies for this veritable epidemic of diabetes in recent years is the use of ginseng. It has been shown to decrease blood sugar levels in terms of fasting blood sugar levels and post-prandial (after eating) levels. By regulating the intake or absorption of glucose, ginseng is able to protect the body from the sudden spikes and drops in blood sugar that can make diabetes so dangerous, or that can lead to development of the disease.(4)

Everyone from students to the elderly used ginseng for its cognitive abilities. Consuming it cannot only stimulate your cognitive abilities of focus and concentration, but can also stimulate neural activity that can be difficult to achieve in older ages. The activity of antioxidants to stimulate these pathways prevents the accumulation of plaque and free radicals in the brain, effectively preventing the onset of dementia, Alzheimer’s, and other cognitive disorders.(5)

Regular use of Ginseng has considerably decreased lung bacteria, and research involving rats has shown that ginseng can stop the growth of cystic fibrosis, a common lung infection. In one 1997 study, rats were given ginseng injections, and after two weeks, the treated group showed a significantly improved bacterial clearance from the lungs.(6)

If you suffer from a condition that causes severe anxiety or you’re just a generally anxious person, ginseng can help. By helping improve your alertness, ginseng can help you feel better about yourself and more willing to get out there and get things done without too much worrying.

Apart from changing your diet, including ginseng to your diet can help reduce the levels of bad cholesterol in your blood keeping your heart healthy and even reducing the chance of a clot or a stroke. You can use supplements as tablets to help reduce your cholesterol or switch those creamy coffees for a delicious ginseng tea instead.

Ginseng is one of the common traditional medicines for an aphrodisiac. Frequent use of powdered ginseng is believed to increase male performance and boost libido; in modern applications. It is commonly suggested for men suffering from erectile dysfunction as a natural solution.(7)

Although extensive research is continuing in other cancers, the most promising oncological area for ginseng is in colorectal cancer; research has shown a direct decrease in colorectal cancer spread and symptoms with the regular inclusion of it in one’s diet. Early research on other types of cancer show anti-tumor properties, but these studies are still in the early stages and discussion still exists on the true medicinal benefit of ginseng in terms of cancer.(8)

Ginseng is quite beneficial to boost the immune system and helps the body fight off infection and disease. Roots, stems and leaves of ginseng are used for maintaining immune homeostasis and enhancing resistance to illness or infection.

Several researches have shown that American ginseng improves the performance of cells that play a role in immunity. Ginseng controls each type of immune cell, including macrophages, natural killer cells, dendritic cells, T cells and B cells.(9)

Ginseng works as a soothing and anti-inflammatory substance and is often recommended for women suffering from extreme menstrual discomfort and cramps. It can help to reduce the mood swings commonly related with menstruation and the menopausal change in middle-aged women.(10)

Ginseng helps to stimulate blood flow throughout the body, mostly to the skin cells and is able to keep the skin looking young and hydrated. This falls under the category of anti-aging properties, but it is also associated to detoxifying the skin and boosting the immune response in the body’s largest organ.(11)

Ginseng is valued throughout the world for its ability to reduce the signs of aging. Mainly, it is used as an antioxidant, which can prevent the negative effects of free radicals throughout the body, which are the dangerous byproducts of cellular metabolism that can damage healthy cells. Antioxidants found within it can prevent chronic diseases like heart disease, as well as certain types of cancer. Additionally, it has been connected to preventing the formation of maltol, another dangerous substance produced by the body that can worsen medical conditions.(12)

Ginseng consists of natural carbohydrates that have been directly associated with the prevention of alopecia and male pattern baldness. By applying ginseng salves or consuming the spice directly to the scalp can increase the health of the hair follicle beds, prevent dandruff, and reduce hair loss considerably.(13)

Regular use of Ginseng help to treat and prevent influenza and respiratory syncytial virus (RSV), a respiratory virus that infects the lungs and breathing passages, according to research findings by a scientist in Georgia State University’s new Institute for Biomedical Sciences.

‘Ginseng’ comes from a Chinese term meaning ‘man root’, possibly because the herb’s unusual shape resembles the legs of a person. The history of ginseng consumption stretches back more than 5,000 years, when it was often used in the Chinese mountains as a rejuvenating remedy, as well as in soaps and lotions.

Ginseng soon became a popular export, reaching further afield around the world. In the 1700s, a Canadian priest sought a ginseng-like substance in his local area, finding a plant with similar qualities growing widely throughout the continent. It was an American ginseng and is still widely used today, being mainly grown in Wisconsin and Ontario.

There are five major varieties, each with unique qualities; although only two are actually ginsengs:

Panax ginseng also known as Red Ginseng is actually an original one.  It is a good metabolic regulator that seems to perk up your cells in a variety of environments, including some forms of cancer.

Indian Ginseng scientifically known as Withania Somnifera has a variety of neuro-protective effects. It might improve some forms of cognition, and likely a powerful anti-oxidant and anti-inflammatory.

Siberian Ginseng scientifically known as Eleutherococcus Senticosus is particularly good at allowing your body to cope with metabolic stress.  Cellular regulator, and provides a sustained energy boost/improvement in physical performance.  It is also called eleuthero root.

The following ginseng doses have been studied in scientific research:

How to Make Ginseng Tea

If you want to add ginseng to your daily diet, try making your own ginseng tea.

In China, people have been drinking ginseng tea for 5,000 years. In Chinese herbal medicine, practitioners recommend that adults over 40 drink one cup of ginseng tea every day.

Ginseng tea, just like ginseng supplements and extracts, is used to improve your mental power and memory. When making ginseng tea, first select the type of ginseng you want to use: American (which is better during hotter months) or Korean (better during colder months). You can buy ginseng tea bags from your local food store, but making it yourself from the root of the plant is the most beneficial form.