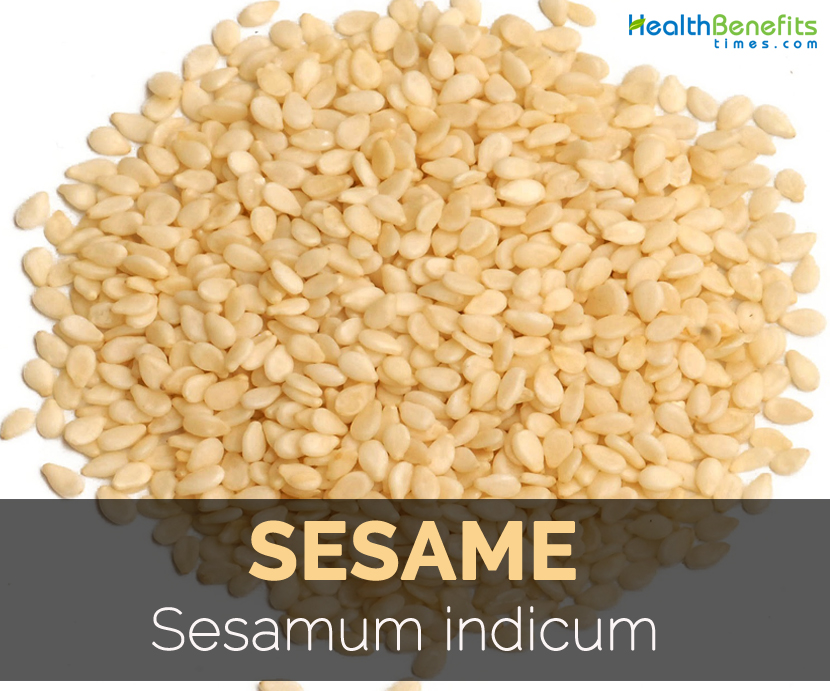 When the plant reaches at maturity the stems and leaves turns to red from green and yellow. Though the flowers are self-pollinated, insects do the crosspollination which is common.  Each plant delivers about 15 to 20 fruits that consist of 70 to 100 seeds. Due to the high resistance to rancidity and oxidation, it is called Queen of Oilseeds. The color of the flower ranges from white, purple, blue, gray, red, brown, tan, buff, gold to black. White Sesame Seeds, Brown Sesame Seeds and Black Sesame Seeds are the varieties of Sesame seeds.

Sesame plant is considered as the oldest cultivated plants found in the world. It is highly appreciated oil crop of Assyria and Babylon about 4000 years ago. Currently, China and India are regarded as the largest producers of Sesame in the world displaced by Sudan, Myanmar, Mexico, Venezuela, Nigeria, Uganda, Turkey and Ethiopia.

It is an annual plant which is occasionally perennial and grows upto 0.5-1.5 m in height. The plant is highly branched or unbranched that depends upon the variety. The simple leaves are 7.5-12.5 cm, alternate, ovate, oblong or lanceolate and toothed. The flower appears on Mid-Summer or Late Summer/Early Fall. Flowers are bell shaped, hermaphrodite, white, pink or mauve pink which develops on the leaf axils. The flowers are turned into a capsule which is a fruit that is oblong to quadrangular, compressed and 1.5-5 cm long. Each fruit bears 50 to 100 seeds or more that are black, white, brown; 2.5-3 mm long; 1.5 mm wide and 1 mm thick of egg shaped. The seeds weigh about 20 and 40 mg.

Sesame seed possess sesamin which is furofuran lignin that is oil soluble. The study made on rats shows that it helps to lower the cholesterol level, normalize blood pressure, results weight loss and prevents liver. Sesamin biosynthesis contains two main genes piperitol/sesamin synthase and encoding dirigent protein. The researchers evaluated that homologues of DIR was found in tomato and sesame and PSS was also discovered in sesame which indicates the foundation of genetic for the sesame product. (1)

The rice bran oils and blend of sesame helps to reduce the blood pressure and promote the cholesterol levels. Sesame oil has low saturated fat that helps to enhance the cholesterol level of the patients. It lowers the chances of heart disease. Antioxidants and healthy fatty acids such as sesamolin, sesamol, oryzanol and sesamin help to provide the effective results. The earlier studies show that antioxidants and mono & poly unsaturated oils is associated with reducing blood pressure as well as total cholesterol. (2)

The diet rich in sesame helps to prevent the infection of gastro intestines and lower the symptoms severity caused due to Salmonella or E.coli. Tomato, yeast and pumpkin are the other foods that provide these beneficial effects. The extract of sesame seed and konjac gum helps to prevent Salmonella and E.coli onto the host from latching. The fiber helps to maintain the healthy digestion and gut. (3)

Sesame seeds have natural oils that help to lower hypertension, strain of cardiovascular system and prevent the cardiac ailments. Moreover, magnesium acts as a vasodilator. Sesame seeds are loaded with minerals about 25% of daily requirement.

Sesame seeds contain various minerals and vitamins that help to lower the chances of cancer. It also have phytate, which is a compound that prevents cancer and acts as an antioxidant which helps to reduce the activities of free radicals that are the harmful byproducts of cellular metabolism and leads to the health ailments such as premature aging, heart disease and cognitive malfunctions. Sesame seeds are associated with the prevention of lung, breast, leukemia, colon, pancreatic and prostate cancer. (4) (5)

Sesame seeds are the great source of magnesium that helps to lower the risk of diabetes and manage the health conditions. Additionally, the oil of Sesame seeds has positive effect on the diabetic medications such as glibenclamide in the Type 2 diabetic patients. It helps in the regulation of glucose and insulin levels and also manages the diabetic symptoms.

Sesame seeds have ample amounts of minerals such as calcium, zinc and phosphorus that help to enhance the bone health. The minerals are vital parts for the development of bones, repairmen of bones which may get weak due to injury and chances of osteoporosis. (6)

Sesame seeds are loaded with adequate amounts of fiber which is essential for the healthy digestion. It adds bulk to the movements of bowel and makes the movement efficient from the digestive tract. It helps to lower the problems such as diarrhea, constipation, prevent the colon health and lower the risk of cancer and gastrointestinal diseases. It helps to lower the bad cholesterol from blood vessels and arteries and also prevents heart attacks, atherosclerosis and strokes. (7)

Sesame seeds help to lower the inflammation in bones, muscles and joints and also lower the pain caused due to arthritis. Additionally, copper helps to strengthen the walls of blood vessels, joints and bones. Copper is essential for the iron uptake which is vital for the hemoglobin. The adequate amount of copper assist circulation and transports oxygen in the body for the functioning. (8)

Sesame seeds have adequate amount of zinc which is essential for the collagen formation, strengthening hair, muscle tissue and skin. The oil extracted from Sesame seeds helps to lower the presence of skin marks and burns and also lowers the chances of premature aging.

Sesame seeds are rich in protein which is broken down into usable proteins in the human body. It promotes the healthy growth of cells, overall strength, energy levels, mobility and metabolic functions. (10)

The oil extracted from seeds is used as galactogogue.

The seed oil is used orally as an emmenagogue.

The decoction made from dried seeds is used for asthma.

The juice extracted from new leaves is used to discharge placenta.

The oil extracted from seeds helps to persuade lactation and acts as an antitussive.

The seed oil is used by males for sexual neurasthenia as a tonic.

The grounded seeds are mixed with masa and consumed for enhancing milk flow in the nursing mothers.

Seeds are consumed as stimulant, hypnotic and stimulant for lactation.

Orally, the juice of plant is used as an aphrodisiac.

The seed oil spread over umbilicus and about 3-5 ml is placed inside ostium which is used as an abortifacient.

The seeds are used as an emmenagogue.

The hot water extract made from dried bark is orally used for chest pains, dislocations and contusions.

The hot water extract made from dried plant is used as a contraceptive in 13th century.

The hot water extract made from leaves is orally used by Transvaal Sotho as an aid for malaria.

The seed oil is orally used as an emmenagogue.

In Western European countries, Sesame is used as a laxative for the treatment of dysentery.

In Venezuela, Sesame is used to treat cough.

The daily intake of Sesame seeds in excessive amounts may affect the colon. The researchers shows that the intake above 15 nanograms of Sesame seeds regularly affects colon which leads to the fatal diseases such as colon cancer. It is considered as one of the harmful side effects of Sesame seeds that can result to death.

Sesame seeds can cause diverticulitis by affecting the colon health. It is a medical condition that forms severe painful pouches in the colon’s inner wall. It could lead to cramping, constipation, abdominal pain, and others.

Allergy is the other side effects that could be faced with an intake of Sesame seeds. It may cause the allergies such as digestive issues, runny nose, eye inflammation and asthma in sensitive people.

It is an allergy that is caused due to the consumption of Sesame seeds. It affects the whole body due to the allergic reaction. It may cause wheezing, chest tightness, hypotension etc. It also leads to the blockage of throat and airway so one could suffer from suffocation that leads to death.

Some people might experience the appendix infection by consuming extreme Sesame seeds. The seeds might get stuck in organ which might lead to the serious to mild infections.

Sesame seeds possess the laxative properties. The high intake of kernels results in diarrhea and loose stool. One should consume it in limited amounts.

Sesame seeds might have negative effects on skin. The high intake of the foods rich in Sesame seed oil could develop skin rashes such as redness and itching.

The black sesame seeds are used to ensure the hair health. But the overuse of it could have adverse reactions. It cause imbalance of hormones that leads to oily scalp and dries hair follicles. Therefore, it might leads to high rate of hair fall. It might lead to baldness as well.

The intake of Sesame seeds during the pregnancy of first trimester is harmful for the health because it may cause miscarriage.

Sesame seeds come unhulled or hulled in various colors. It contains nutritions and minerals such as manganese, copper, calcium and iron. It is used as a topping for breads, vegetables, desserts and pastas. 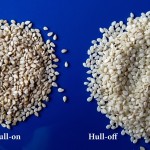 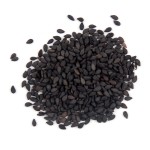 The seeds of Black sesame has a bold flavor. The seeds possess antioxidant and therapeutic properties. It is used to provide flavor to baked goods. The powder is used on the rice dishes such as Tarladalal. This sesmae seed is used to make the oil of highest quality. It is occasionally used as the nut alternatives. 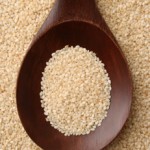