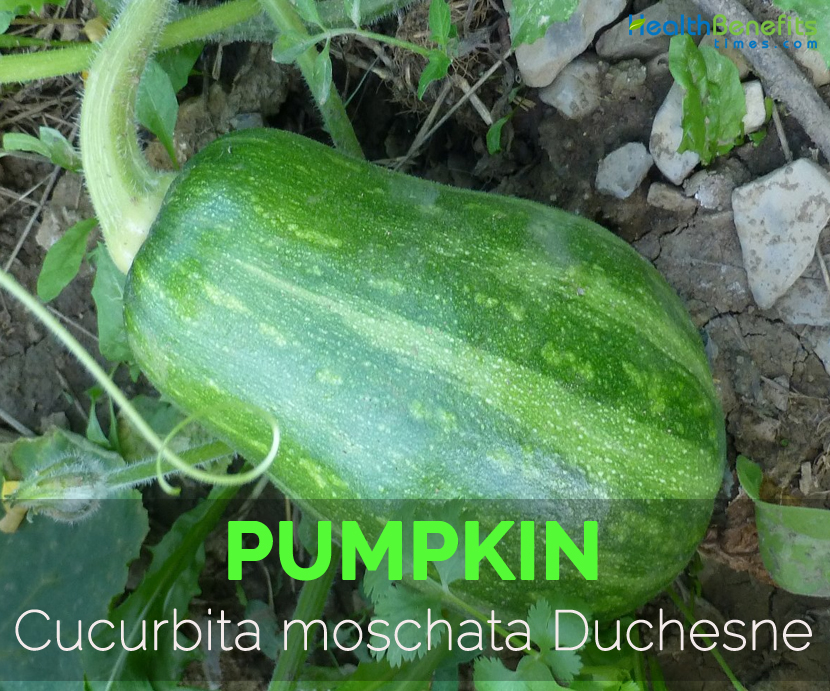 Pumpkin is a creeping vine which has large alternate, simple, ovate-cordate- suborbicular leaves of 20–25 × 25–30 cm. The fruit of the pumpkin is large, globose-ovoid and cylindrical berry. The fruit is light green- dark green with cream spots or completely white. The stems are hairless, climbing vines which is 3 meters high. The plant bears flowers that are pentamerous, axillary, solitary, bright yellow or orangey yellow. The seeds present in the fruit are of ovate or elliptical; flatten with a yellowish-white surface of 8-21 × 5-11 mm size.

Pumpkin  also known as Butternut Squash, Golden Cushaw, Cheese Pumpkin, Melon Squash, Japanese Pumpkin is actually a creeping vine that has large alternate, simple, ovate-cordate- suborbicular leaves of 20–25 × 25–30 cm. Leaves are normally dark green color and has taste similar to a mixture of green beans, asparagus, broccoli and spinach. Because of its wonderful taste it is found used in several food items since ancient times.

Click here for nutritional value and health benefits of Leaves.

Pumpkin is a  monoecious, climbing, annual vine which is found growing in hot and humid climate and normally prefers well drained soil which is rich in organic matters. Flowers of the pumpkin are  pentamerous, axillary, solitary and is bright yellow or orangey yellow colored. Due to its higher nutritional value and its wonderful taste it is one of the popular vegetable around the world.

Click here for nutritional value and health benefits of Flowers.

Pumpkin was originated in Mexico and Central America. Before the Europeans arrival, it was widely cultivated in South and North America. The evidence was found by archaeologists that the cultivation and domestication of Cucurbita moschata dated from 4,000–3,000 B.C. in Peruvian sites and from 1440–400 B.C. in Mexican sites.

The pumpkin provides various benefits to the health along with its consumption. It promotes the heart health, sleep, prostate health and provides various antioxidant benefits. It enhances the mood, eyesight as well. It also makes the skin look younger.

The study shows that the intake of Vitamin A treats several cancers by controlling the malignant cells. The retinoic acid is essential for cell differentiation, development and cancer treatment. The researchers found the evidence that the molecular mechanisms found in retinoic acid has the ability to control cancer cell’s fates. The addition of retinoic acid as a supplement to a diet helps to prevent the cancer development.

Vitamin A is essential for the regrowth of skin and wound healing. It is required to assist the epithelial cells both externally and internally. It works as a powerful weapon to fight against cancer. Vitamin is essential for the formation of glycoproteins, sugar and protein combination that binds the cells together to form soft tissues.

Vitamin A deficiency in the body results in poor complexion. The studies have shown that Vitamin A helps to eliminate acne and improves the skin health. It helps to produce more collagen which keeps the lines and wrinkles at bay. It keeps the skin look young and contributes healthy hair.

An adequate amount of Vitamin A is essential for the smooth functioning of immune functions because Vitamin A helps to regulate the genes that are involved in immune responses. It is required to counteract the autoimmune diseases, cancer, common colds and flu. Beta-carotene also enhances the immune system that helps to eliminate chronic illnesses.

Copper and iron is essential for the synthesis of red blood cells and hemoglobin. Copper assists in the iron absorption from an intestinal tract and releases the iron to be released to the liver where it is stored. The iron helps in the creation of red blood cells. Due to the deficiency of copper, the level of iron also declined which is the cause for anemia. The symptoms of anemia are muscle aches, fatigue, impaired brain function and digestive problems.

Copper is vital for the functioning of brain pathways such as galactose and dopamine which are the neurotransmitter essential to maintain energy, mood, outlook and focus. The copper deficiency results on fatigue, poor mood, low metabolic activity as well as concentration problem.  Copper along with Vitamin C and superoxide dismutase, tyrosinase and ascorbate oxidase helps to eliminate free radicals damage in brain and delays the aging process. It also prevents neuro-degenerative diseases and cancer.

The adequate amount of iron in the blood assists in maintaining mood which depends upon the hormone balance such as dopamine, serotonin and others. The low level of oxygen cannot synthesize the brain functions. Due to this iron deficiency results in sleep disorders, poor mood, lack of motivation and bad sleep.

The intake of potassium rich foods helps to reduce the muscle cramps and improves muscle strength. Muscle cramps are the result of low level of potassium present in the body. It also happens when the person becomes dehydrated and doesn’t intake adequate amount of potassium before and after exercise.

The studies have shown that the high intake of potassium rich foods increases the density of the bones which prevents the age related disease such as osteoporosis. It is also effective for the older men and post-menopausal women.

Edible parts of the plants