Trending
You are at:Home»Foods»Sushi facts and health benefits 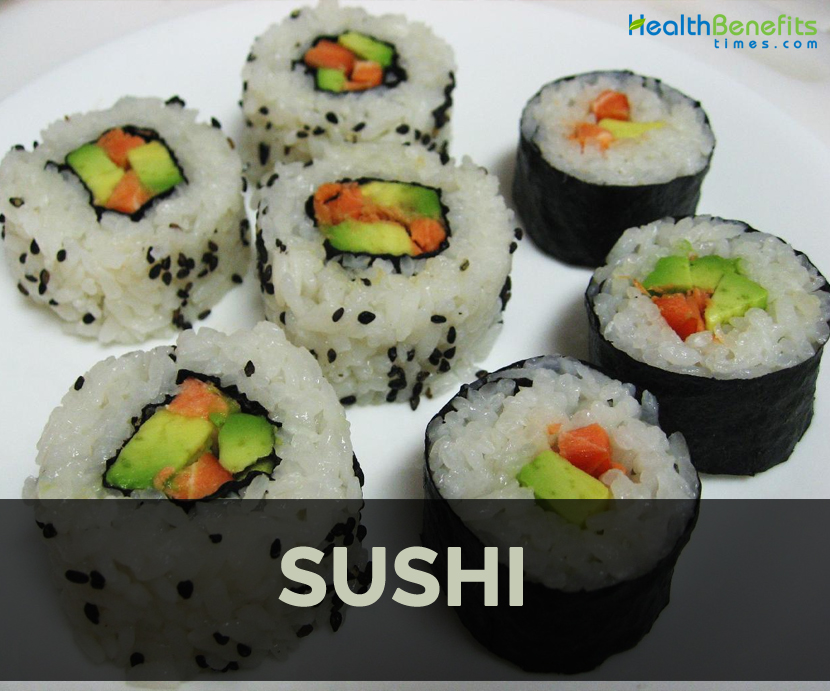 Sushi is prepared with cooked vinegared rice and ingredients such as meat, seafood and vegetables. It was originated in Japan. Rice is the common ingredient in Sushi which is also known as sumeshi or shari. It could be prepared with white rice or brown rice. It is mostly served with wasabi, soy sauce or pickled ginger. Toppings, fillings, way of preparation and condiments used in Sushi may differ. It has been a staple food in Japan for about 700 years. It is able to lower LDL cholesterol, blood pressure, enhance metabolism, balance hormones, prevent cancers, promotes circulation, gastrointestinal health, strengthen immune system and bone health.

It was believed that the sushi began in 8th century in Japan. The original Sushi was refined in Southeast Asia. The fish was preserved in fermented rice. The fish and rice was consumed by the people in Muromachi period. The vinegar was used for the lacto fermentation during Edo period.

In Southeast Asia, during 2nd century, the meat was kept without refrigeration so they treat fish and meat which is wrapped in rice for preserving the freshness. When the time passed, the rice was discarded. It spread to China and Japan. Later in ten centuries, the vinegar was added in the fermentation process. In 1820s, the raw fish was started to use by chefs in the sushi which is known to be Edo style sushi.

It is prepared with a bowl of Sushi rice that is topped with vegetables, raw fish and vegetables. It is fast as well as easy to make. Annually it is consumed in March in Hinamatsuri.

The type of Sushi in which fried tofu is filled with Sushi rice. It consists of carrots, green beans, gobo which is wrapped in triangular aburage.

The cylindrical piece which is made with bamboo mat is called makisu. It is usually wrapped in seaweed or soy paper, thin omelette, cucumber and perilla leaves. Usually, Makizushi is cut in eight or six pieces.

It is the traditional fermented sushi. The fish stuffed with salt are kept in a wooden barrel and again snuffed out with salt. It is weighed with heavy pickling stone. The water which seeps out is removed. The sushi could be consumed after six months.

It is also called box sushi and hako-zushi. It is the pressed sushi. The piece of block shaped is made with the use of wooden mold. The bottom of Oshibako is covered with sushi rice and pressed with the lid to form a rectilinear block which is removed from mold and cut into the bite-sized pieces.

It is the cylindrical piece of medium size with two or more fillings. The fillings could be crab meat, tuna, mayonnaise, avocado, carrots and cucumber.

Sushi is loaded with various nutrients as it is filled with rice, fresh fish and crunchy vegetables. The seafood in sushi contains high content of Omega-3s and selenium along with various minerals as well as vitamins. It is rich in the sodium content. It helps to maintain weight, build muscles, boost energy, enhance immunity, supports digestion and others.

Sushi has high content of Omega-3 fatty acids which is considered to be a good cholesterol that balances the body and eradicated the LDL cholesterol from the body. It also prevents the clogging of arteries and the health conditions such as heart attacks, atherosclerosis and strokes. Omega-3 is associated with the reduction of blood pressure that raise oxygenation to the vital organs as well as tissues. It raise the metabolism of the body. (1)

Sushi contains the seaweed wrap various varieties. It is known as nori in Japan which has high content of iodine. Iodine helps to regulate the endocrine system. The adequate amount of iodine in the body helps to balance the hormones in the body. (2)

Fish is the great source of protein and has low content of fat and calories. This helps to promote the body functions, metabolize energy, and form new cells that help to maintain the overall health. (3)

Ginger and wasabi are the common elements in Sushi that possess anti-mutagenic and anti-carcinogenic properties. It helps to eliminate free radicals that could mutate the healthy cells into cancerous cells. Additionally, the fish varieties have a high content of selenium. The seaweed wrapper contains phytonutrients which perform as an antioxidant to prevent from cancer. (4)

Green tea is associated to promote digestion and colon health. Moreover, the soy sauce has high content of sodium, protein and iron. It prevents the colon from bacteria. (5)

Fish has high content of iron. Sushi helps to raise the production of red blood cells. Iron plays a vital role in the RBCs production. It assist the blood circulation, hair growth, enhance the skin color and tone, promotes metabolism and speeds up the healing process of cells and tissues. (8)