Trending
You are at:Home»Foods»Kimchi facts and health benefits 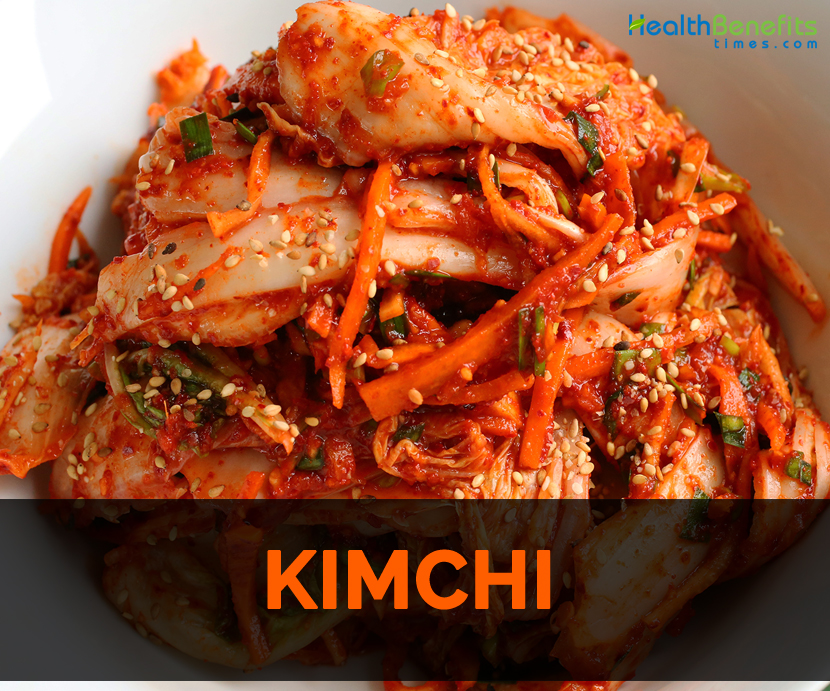 Kimchi also called kimchee, gimchi, is a popular Korean food that is prepared with the fermentation of radish or cabbage. Brine, spices, scallions, ginger, garlic and chopped radish are the ingredients added to Kimchi. It plays a vital role in the Korean culture. More than 200 varieties of Kimchi are made which differs in taste due to the preparation method. According to the ingredients used, the nutritional value also differs but is low in calories. Traditionally, Kimchi was placed in jars underground to unfrozen or keep cool during winter. Kimchi varies according to the season.

It was believed to be originated in Shilla Dynasty and became common when Buddhism caught on the nation and promoted as vegetarian lifestyle. The spicy peppers were added in 1700s when the Portuguese missionaries brought chili peppers. It is an ideal method to pickle vegetable to longer the foods lifespan. Kimchi was made in winter in Korea.

Red chili pepper flakes has become the vital ingredient in different varieties of Kimchi. The other spices such as sour, sweet, white and orange were added in the 12th century. It is regarded as the national dish of Korea. Previously, Kimchi was made from greens and salt. As Late Choson Era, the ingredients such as powdered chili and chotkal were used in kimchi.  The chotkal was made from anchovies in Southern regions whereas shrimp and croaker was used to make chotkal in Northern regions. This makes the taste of Kimchi differ. Chili powder and Chotkal prevents the Kimchi from getting bad.

Each Korean (average) consumes about 40 pounds of Kimchi in a year. It could be prepared from various vegetables. It is loaded with high content of fiber and low amount of calories. In a serving, about 505 of carotene and Vitamin C could be obtained. Ginger, garlic, onions and chili peppers are the common ingredients in various Kimchi. It has high concentration of Vitamin A, riboflavin, thiamine, iron and calcium. It is considered to be the healthiest food that is loaded with ample vitamins. It aids digestion and reduce the cancer growth. The research shows that it could increase the chances of gastric cancer. The healthy bacteria and antioxidants found in Kimchi promotes the collagen production that promotes the skin elasticity, youthful skin and slows down the aging process. The bacteria named Lactobacillus is effective against the yeast infections.

Kimchi assist in the digestive health. It is a great source of probiotics that is obtained from the process of fermentation. It promotes the taste and forms the bacteria named Lactobacillus that is considered to be healthy for intestines of the body. It is prepared from the cabbage that possesses detoxification properties and eliminates toxins and wastes. It supports to clean intestines. Fiber stimulates the bowel movements and also prevents constipation. (1) (2)

The daily intake of Kimchi has positive effects on the cholesterol levels. Garlic has high content of allicin and selenium. Allicin lowers the level of cholesterol and also reduces the chances of cardiac ailments such as heart attacks and strokes. Selenium prevents the plaque buildup and lowers the chances of atherosclerosis. The fermented Kimchi lowers the LDL cholesterol. (3) (4)

Kimchi has high amount of antioxidants which acts as scavengers. The flavonoids and phenols  prevents the oxidative damage and negative effects of free radicals. (5)

Kimchi has lactobacillus bacteria which provide therapeutic properties against the skin problems like atopic dermatitis. The study shows that Kimchi helps to reduce inflammation. (6)

Kimchi has lactobacillus bacteria which is healthy for the body. It helps to lose weight by lowering the level of blood sugar and controlling appetite. Fiber makes the body full for long period of time and satisfies hunger which prevents overeating. The study shows the positive effects of Kimchi in the body. (7)

Kimchi has high content of flavonoids as well as phenolic components. Ginger, peppers and garlic have beneficial effects on immune system. It counteracts against infections such as flu or cold symptoms. (8)

Kimchi has antioxidant properties due to Vitamin C. It has anti-aging properties which helps to reduce inflammation and speeds up aging process. It lowers the oxidative stress in cells and inhibits lipid peroxidation. (9)

Kimchi lowers the chances of cancer development due to the presence of anti-cancer properties. It has flavonoids that inhibit the cancer cells growth. Cabbage has glucosinolates which break down for the formation of isothiocyanates. (10)

Kimchi has therapeutic properties. The peptic ulcers are caused due to helicobacter pylori. The study shows that Kimchi has antagonistic properties which eliminate pathogens from the body. (12)

The excessive intake of Kimchi leads to the digestive ailments. The research shows that high consumption could worsen the chances of gastric cancer. Kimchi has high content of fiber that could lead gas as well as bloating.

The high blood pressure patients should be cautious while consuming Kimchi due to the high concentration of salt. The study shows that the consumption of Kimchi by hypertension in limited amounts does not have harmful effects on cardiac or blood pressure.