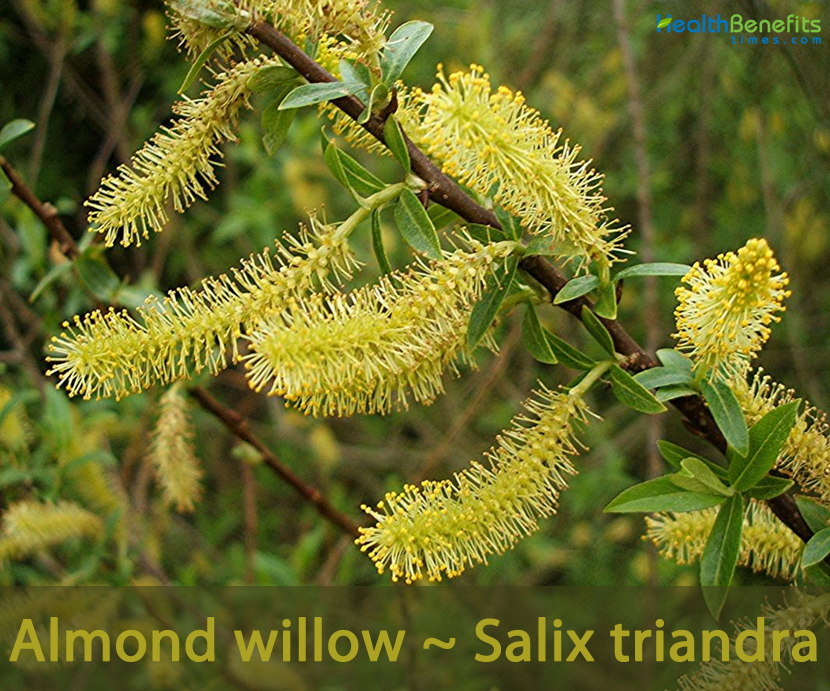 Salix triandra, with the common names almond willow or almond-leaved willow is a species of willow belonging to Salicaceae Mirb. (Willow family). The plant is native to Europe and Western and Central Asia. It is found from south-eastern England east to Lake Baikal, and south to Spain and the Mediterranean east to the Caucasus, and the Alborz Mountains. It usually grows in riparian habitats, on river and stream banks, and in wetlands. Some of the popular common names of the plants are Almond willow, Almond-leaf willow, Almond-leaved willow, Black maul and French willow. The scientific name is derived from the male flowers having three stamens. The English common name refers to the similarity in leaf shape to almond leaves.

Almond willow is an upright, multi-stemmed, deciduous shrub or small tree that normally grows about 10 m (33 ft) tall. The plant is usually multi-stemmed, with an irregular, often leaning crown. The bark is smooth grey-brown at first, becoming scaly on older stems with large scales exfoliating (like a plane tree) to leave orange-brown patches. The twigs are olive-brown or brown, shiny and hairless. The ridges flake off leaving a smooth grey bark. The plant usually grows in riparian habitats, on sides of river, ponds, and marshes, stream banks, in wetlands, waste places and along shorelines of lakes or large rivers.

The plant does best in deep, moist soil in sun. It does not tolerate shade or shallow chalk. It also tolerates pollution and strong winds except strong coastal winds. The plant develops an aggressive root system so site at least 10 m away from buildings. This tree is often cut low as the young branches are used in basket work; they are sharp and pointed a red-brown or olive color. They are usually planted along waterways and around ponds and lakes, either alone or in groups.

The leaves are elongated, broad lanceolate, 4-11 cm long and 1-3 cm wide, with a strongly serrated margins. The finely toothed leaves are weakly shiny and dark green on the upper side, while the underside is dull and greenish grey.  Young leaves may be weakly pubescent, older ones are glabrous. On the underside, leaf veins are slightly elevated from the surface. Large rounded stipules with strongly serrated margins are present around the petiole bases, and persist on the shoots after the growing season. Petiole is normally 1-2 cm long with two conspicuous basal stipules. 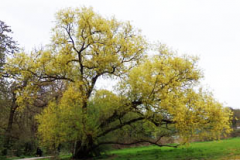 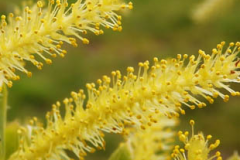 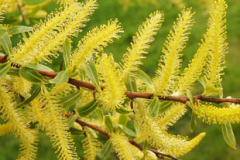 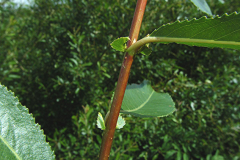 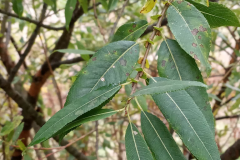 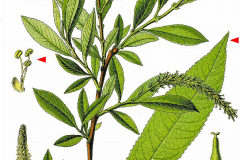 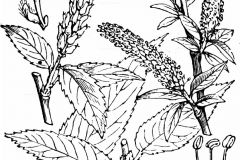 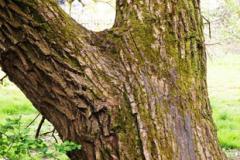 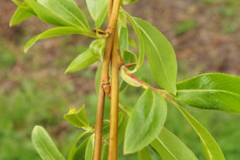 The flowers are produced in catkins in early spring at the same time as the new leaves, and pollinated by insects. They are dioecious, with male and female catkins on separate trees; the male catkins are narrowly cylindrical, 2.5 to 5 cm long and 0.3 to 1.2 cm wide, dense flowered, showy and fragrant, uniformly pale yellow while the female catkins are usually rather shorter about 2–4 cm long and denser than the male. The male flowers have three stamens, a useful identification feature with most other willows having two or five stamens. Flowering normally takes place in between March to May.

Fertile flowers are followed by capsules from the elongated mature catkins that are relatively short, green, and glabrous.