Trending
You are at:Home»Fruits»American Cranberry 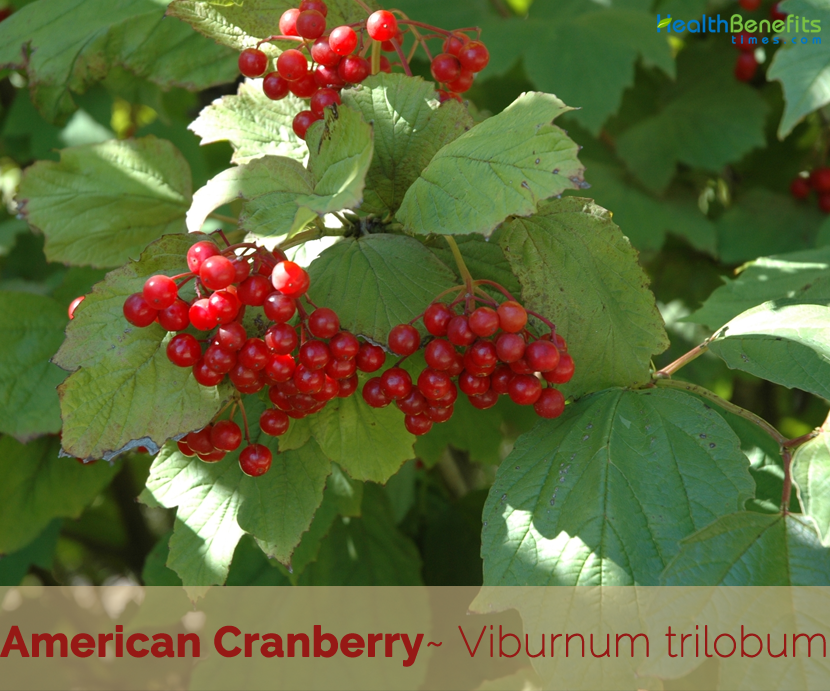 American cranberries are members of the Viburnum genus, and are not a “true” cranberry. They are part of the Caprifoliaceae or honeysuckle family and were named for their similarity to the commercially marketed cranberry. They have a similar flavor and ripen at the same time of year. The fruit is sour and rich in vitamin C can be eaten raw or cooked into a sauce to serve with meat or game. Sometimes they are referred to as American Highbush cranberries or Cranberry viburnum. There are three different species of Highbush cranberry: the American, Viburnum trilobum, the European, V. opulus, and a hybrid of the two, V. opulus var. americana. The American variety is said to have a much better flavor and palatability than the European variety. American cranberries are most often found in the wild and are a favorite of birds like the cedar waxwing.

American cranberries are hardy, deciduous, spring-flowering North American shrub that grows about 12 feet (4 m) tall. The plant is found growing in cool moist woodlands, stream banks in wooded areas, sandy swamps, and soggy thickets, edges of sandy marshes, forested bogs, and roadside ditches. American Cranberry Bush is occasionally cultivated as an ornamental landscape plant. The plant is adaptable to a variety of soil and acidity, but it does best in consistently moist but well-drained soil. The plant has woody and branching roots and gray, rough bark with scaly texture that smells skunky when scratched.

Pair of opposite leaves occur along the shoots and twigs. Individual leaves are 2-4 inch long and nearly as much across (oval in outline). They are palmately 3-lobed, and sparingly dentate to smooth along their margins. There are either a few large teeth or they are absent altogether. The shallow to moderately deep lobes have pointed tips, while the base of each leaf is rounded. Upper leaf surface is medium green and hairless, while the lower surface is pale green and either hairless or hairy along the veins. The slender petioles are ¾-1½ inch long; light green to red, and glabrous. Near the apex of each petiole where it joins the leaf, there are 1-2 pairs of tiny glands with rounded tops. These glands may become deformed or nearly disappear as the season progresses. At the base of each petiole, there is a pair of simple stipules; they are deciduous and insignificant. Leaves are glossy dark green in the summer but often change to yellow-red or red-purple in the fall.

The plant produces flat-top clusters of showy white flowers in June. Flowers are white, produced in corymbs up to 13 cm (5 in) in diameter at the top of the stems. Each corymb comprises a ring of outer sterile flowers 2–2.5 cm (3⁄4–1 in) diameter with conspicuous petals, surrounding a center of small (5 mm, 0.20 in), fertile flowers. The flowers are pollinated by both wind and insects.

The fertile flowers are replaced by one-seeded berry-like (a drupe), oblong, globose, bright red, 15 mm (0.59 in) long and 12 mm (0.47 in) broad containing a single flat, white seed, strongly flattened. They become bright red at maturity during late summer or early fall. Individual seeds are about 5 mm. across, nearly orbicular in shape, and flattened. The seeds ripen from August to September. The flesh of the drupes is tart. The plant does not begin to produce fruit until approximately five years of age.