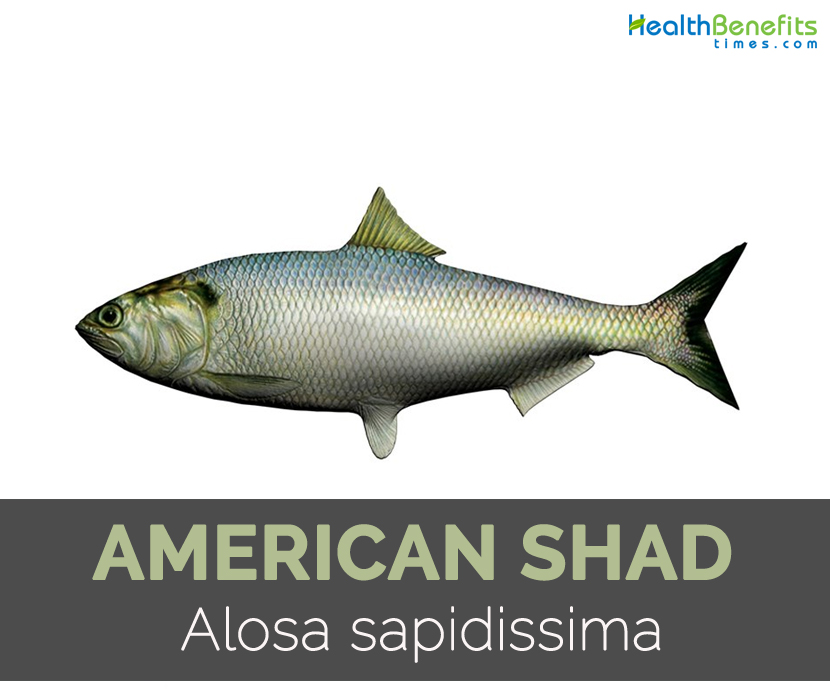 Alosa sapidissima, commonly known as American shad, is an anadromous fish that belongs to Clupeidae family and Alosa genus. In North America, there other five species of shad yet Alosa sapidissima is closely associated to European than any of these. It is thought to have evolved from ancestor of European radiation. It spends most of its lives at sea consuming plankton and maturing in large schools. After 3 to 5 years, it makes a spring migration to spawn in their freshwater birth river. In North Carolina, most shad dies after spawning yet shad resides in more northern regions that migrates back to ocean and return in subsequent years to spawn. Historically, the native range of American shad includes river system from southern Labrador, Canada to Northern Florida, USA. This fish weighs 3 pounds (1.4 kg) and 8 pounds (3.6 kg) and possess a delicate flavor when it is cooked. It is regarded to be flavorful enough that it does not require herbs, sauces and spices. It could be fried, boiled and filleted in butter or baked.

Its predators are birds, bears and large fish such as smallmouth bass, striped bass, blue fish and channel catfish.

American shad are anadromous i.e. it lives in ocean but spawns in freshwater rivers or streams. Adults migrate to waterway in spring in which they were born to spawn. Female could lay 1, 00,000 to 6, 00,000 eggs. Eggs drift downstream & hatch in 7 to 10 days. Adults die or return to the ocean after spawning. Juveniles stay in nursery areas feeding on terrestrial insects and zooplankton. It has the lifespan of 6 to 10 years.

American shad live in schools near shorelines. The populations which spawn on Eastern Coast assemble off Maine, Massachusetts and in the Bay of Fundy in summer and off Virginia, North Carolina and Florida in winter.

American shad can live from 6 to 10 years in the wild and 9 years average. Migration (from rivers to the sea) places a heavy toll on their bodies and increased migration promotes mortality. Migrating females have 60 % as an average mortality rate during seasons in which they migrate. American shad are anticipated to live 4 to 7 years (average 6 years) in captivity.

Juveniles are omnivores and its diet consists of insect larvae and zooplankton especially copepods and mysids. Once juveniles left spawning areas, they eat more once. As it gets older, American shad broadens diet including small fish, plankton, crustaceans, worms and fish eggs. During migration (in the late months of winter), shad consumes very little food. Thus, as the water temperatures increases in spring, its diet returns to normal.

Native Americans captured shad as a predominant food and European colonists used to keep barrels of salted shad in their homes. Shad were considered the savior fish during Revolutionary War which fed George Washington’s troops after the harsh winter of 1778. The harvest of other herring and shad from Potomac River added income Washington made on the plantation of Mount Vernon.

Over 19th century, fishermen congregated to region’s river for spring shad spawning runs. Often the fish were prepared though planking method (tacking fish to wooden boards and smoking them to an open fire). This tradition is honored by some communities that continue to hold festivals.