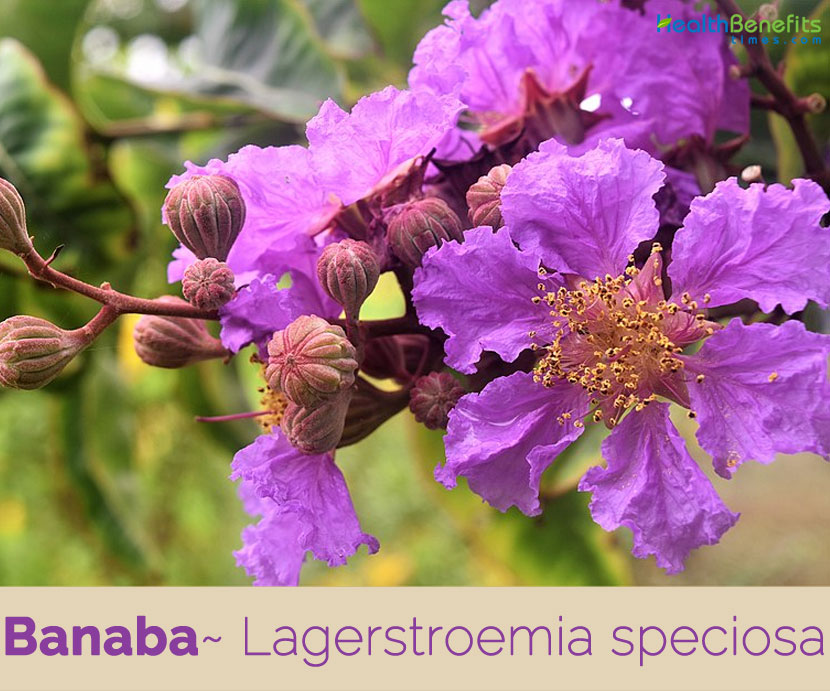 Lagerstroemia speciosa commonly known as giant crepe-myrtle, Queen’s crepe-myrtle, banabá plant for Philippines, or pride of India is a species of Loosestrife family Lagerstroemia. The plant is native to temperate and tropical Asia including the Indian subcontinent, China, Cambodia, Myanmar, Thailand, Vietnam, Indonesia, Malaysia, and the Philippines. This species has been widely cultivated as ornamental and is now naturalized in tropical regions of Asia and Africa, Australia, Mexico, Central and South America, and the West Indies. The generic name honors M. Lagerstroem, 1691-1759, a Swedish patron of science and the specific epithet ‘speciosa’ is a Latin word for showy, referring to the flowers.

Giant crape-myrtle, Pride-of-India, Queen’s crape-myrtle, Queen’s flower, rose of India and blood wood are few of the popular common names of the plant. The tree is harvested from the wild for local use as a medicine and source of materials. The wood is of good quality, considered to be one of the best timber trees in Myanmar and Assam, and is often traded. One of the most amazingly showy of flowering trees, and a good shade tree, it is commonly cultivated in gardens or along the sides of roads for its brightly colored mauve or pink flowers with crinkled petals.

Banaba is a multi-stemmed, fast-growing, densely branched, deciduous or semi-deciduous shrub to small tree that normally grows up to 40-45 m tall and 100 -150 cm in diameter. The bole is commonly short, cylindrical, often fluted near the base, branch-less for up to 18 m. The buttresses are inconspicuous, rounded, low and small. Bark surface is smooth or with small papery flakes, grey to light fawn-brown mottled. Inner bark is fibrous, grey-fawn to yellow, turning dirty mauve or purple upon exposure. Crown is usually bushy and spreading. The plant is found growing in gardens, yards, around parking lots and along highways. It can be found naturalized in waste places, disturbed sites, open grasslands, rivers, disturbed or secondary forest, forest edge in moist and dry habitats, and along roadsides in a great variety of climates. The plant may vary from well drained to occasionally flooded, but not peat soil.

The leaves, on a 0.5-1 cm long petiole, are simple, opposite or sub-opposite, oblong-elliptic with entire margin and acute or obtuse apex, 5-22 cm long and 4-10 cm broad, coriaceous, of intense bright green color above, paler below, that turn orange red before falling.

Terminal panicle inflorescences are erect, 15-40 cm long, carrying numerous flowers, on a 1-1.5 cm long pedicel, of color varying from pale pink, to lavender, to purple pink, of 5-8 cm of diameter, lasting 2-3 days. The sepal is funnel or bell-shaped and 6(-9)-lobed. Petals are oblong-obovate or obovate, shortly clawed, and 3 to 3.5 centimeters long; the margins are undulate and hardly fimbriate. They are white to pink or purple, clawed and wrinkled. The stamens are many and in several rows. The ovary is superior, 3-6-locular with many ovules in each cell and with 1 style. Flowering normally takes place from April-June in Philippines, from July-October in Java and from May-July in Papua New Guinea.

Fertile flowers are followed by a large nut-like globose, woody capsule, obovoid or ellipsoid, and 2 to 3.5 centimeters long and broad. Fruits are initially green turning to blackish when ripe containing numerous winged seeds.  Seed is pale brown, with a wing about 12 to 18 millimeters long of pale brown color. 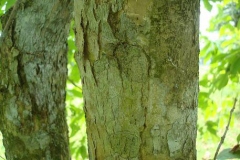 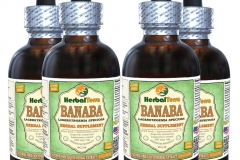 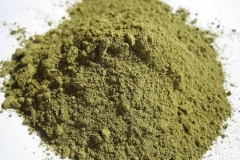 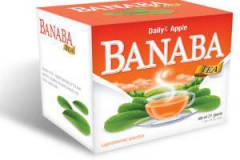 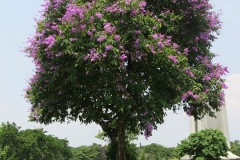 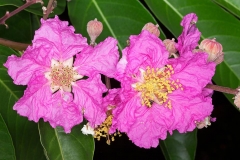 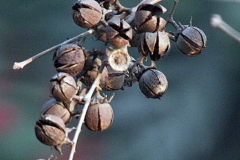 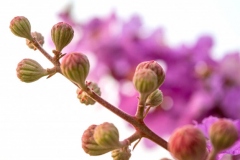 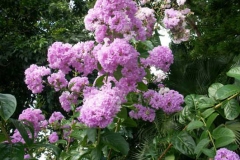 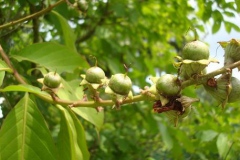 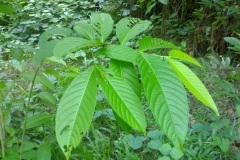 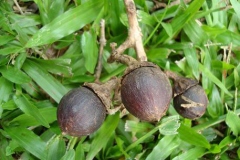 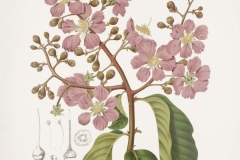 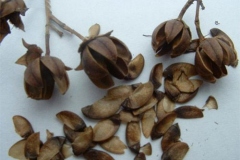 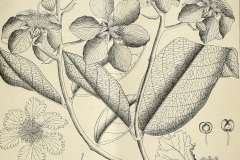 Banaba is an herbal remedy extract from the leaves of Lagerstroemia speciosa. Several researches have shown that Banaba is one of the plants that have a wide range of health benefits. It is considered alternative medicines to different health concerns like diabetes, high blood pressure, high cholesterol, kidney disease, UTI and metabolic syndrome that is why it is being marketed now in the form of supplements. Listed below are some of the popular health benefits of banaba

Another remarkable effect of the use of banaba leaf is its ability to help lower blood glucose levels in people with diabetes. Investigation from the Suzuka University in Japan found that the leaf was able to improve glucose uptake in both test tube and animal studies, providing a significant improvement in blood sugar levels. Results recommend banaba leaf could be of help as an adjunct treatment for diabetes. Compounds such as corosolic acid and tannins appear to be the components with anti-hyperglycemic effects. (1)

Several evidences shows that taking banaba leaf on a regular basis can help obese individuals lose weight and maintain better weight control. Compounds within the leaf appear to block fat absorption in the body, preventing the storage of fat in body tissues. It also acts by improving glucose utilization in the body. (2)

Compounds in banaba leaf also appear to help protect the liver. These components appear to break down fats that can gather in liver tissue, leading to fatty liver disease and other conditions. Research from the University of North Bengal in India found that Lagerstroemia appears to have the effect of breaking down adipose components in the bloodstream, which is then prevented from accumulating in the liver. (3)

The use of banaba leaf as a medicinal compound has included its service as a natural remedy for relieving viral infections. About half of the cases of the common cold are caused by viral agents that attack the respiratory system, causing symptoms of severe rhinitis. Research has discovered that ellagic acid, one of the active components of banaba leaf, was found to be effective against three common viral agents involved in the occurrence of rhinitis symptoms. Banaba leaf’s anti-viral properties are being studied at as an assistant treatment for HIV infection, to improve patients’ ability to fight the disease. (4)

Banaba leaf has also been used traditionally as an anti-infective agent and for lowering fever caused by infections. A study from the University of the Philippines investigated banaba leaf for use against some common infectious agents and found that it was highly effective for reducing these infections, with results occasionally similar to pharmaceutical antibiotics. (5)

Banaba leaf is quite effective in treating metabolic syndrome, a group of pre-diabetic conditions that increases susceptibility to heart disease and stroke. Researchers at Mukogawa Women’s University in Nishinomiya, Japan found that by the end of 10 weeks of treatment with banaba leaf, blood pressure had been dropped, fat metabolism had normalized, and the body’s inflammation levels had decreased.

Leaves consist of the minerals manganese and zinc. Extracts from the seeds have been found to have powerful antioxidant properties and are in fact being investigated as a possible HIV treatment.

Banaba plays an important role in the fight against cervical cancer. When taken on a daily basis, it has been shown to encourage the body’s release of cancer- killing agents that help to stop the cancer in its tracks. Other forms of cancer, such as leukemia and breast cancer are extremely susceptible to the effects of Banaba as well.

Banaba is considered a very safe and effective natural treatment remedy for gout. For centuries, Filipinos have boiled the leaves and used them to treat gout. Leaves consist of valoneic acid dilactone or VAD, which is extremely effective in preventing the xanthine oxidase enzyme from producing uric acid. High amounts of uric acid in the body crystallize and cause devastating pain and inflammation. Reducing the amount of excess uric acid in the body prevents the formation of gout.  Popular uric acid management supplement, such as Urcinol, also consists of Banaba.

Urinary tract infections are a common problem that affects millions of individuals around the world. Generally, pain-relievers and heat are used to relieve symptoms of pain, cramping and inability produce adequate amounts of urine to flush out bacteria from the urinary tract. In severe cases, several different types of antibiotics are used to remove the infections. Banaba leaf also has traditional use for urinary tract infections and kidney problems. The anti-inflammatory properties of the components are supposed to have a soothing effect on urinary tract tissues, while anti-bacterial effects remove the infectious agents. Banaba leaf was traditionally soaked into a tea to relieve symptoms of UTI.

Banaba is a cost effective and safe medication for people that suffer from poor kidney health. When taken daily, Banaba tea or supplements forces toxins from the kidneys and encourages healthy function.

When used as a topical agent, Banaba helps to reduce the amount of lipid content in the skin, which helps to prevent premature aging, skin atrophy and other skin conditions. Banaba is also high in calcium, zinc and magnesium making it an effective natural remedy to use to counter the effects of acne and dry skin.

Traditional uses and benefits of Banaba

Who should consider taking Banaba