Trending
You are at:Home»Herbs and Spices»Health benefits of Banisteriopsis caapi 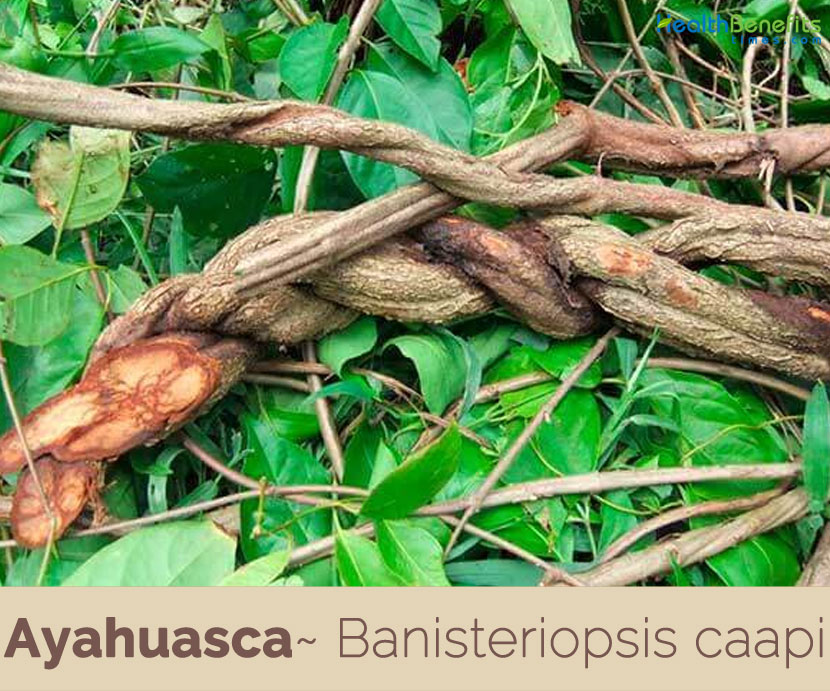 Banisteriopsis Caapi also known as ayahuasca is a South American liana belonging to the Malpighiaceae family, entirely used in making ayahuasca, along with the leaves of the Psychotria Viridis plant. Ayahuasca is actually a hallucinogenic brew, famous in South America. It is known as “the vine of the soul,” which means the spirit is free from all the impurities. The plant is native to jungle of Amazon basins and Orinoco river basins. It is cultivated by indigenous peoples, but the wild herb is preferred for medicinal use. According to The CRC World Dictionary of Plant Names by Umberto Quattrocchi, the naming of the genus Banisteriopsis was dedicated to John Banister, a 17th-century English clergyman and naturalist. An earlier name for the genus was Banisteria and the plant is occasionally mentioned to as Banisteria caapi. Other names include Banisteria quitensis, Banisteriopsis inebrians, and Banisteriopsis quitensis.

Ayahuasca, Soulvine, Jagube, Caapi and Yage are few of the popular common names of the plant. The name Ayahuasca means “vine of the soul”, and the shamans of the indigenous Western Amazonian tribes use the plant in religious and healing ceremonies. In addition to its hallucinogenic properties, it is also used for its healing properties as a purgative, effectively cleansing the body of parasites and helping the digestive tract.

Ayahuasca is a giant woody, climbing vine or shrub which normally grows up to 30 m (98 ft.) in length. The plant thrives in humus-rich and moist soil with lots of water. Stems are sericeous to glabrate twining itself round other plants for support. In the Quechua language, spoken in Peru and neighboring countries, ayahuasca means “spirit of the dead,” representing the powers attributed to this plant.

Lamina of the leaves are 4.8-20.5 cm long, 2.5-11.5 cm wide, ovate, obtuse to truncate at the base, short- to long-acuminate at the apex. It is glabrate above and sparsely sericeous to glabrate below, bearing 2-5 pairs of sessile glands below near or at the margin and another pair near the midrib at the base. Petiole is 9-25 mm long, sparsely sericeous to glabrate, eglandular or biglandular near the apex. Stipules are 0.5-1 mm long and triangular.

Inflorescence is an axillary cyme of 4-flowered umbels, sparsely tomentose to velutinous. The bracts and bracteoles are 1-1.8 mm long, deciduous before or during anthesis, rarely immediately afterwards. Pedicel is 7-11 mm long, sessile, appressed- or tomentose-sericeous. Sepals are abaxially sericeous, adaxially minutely tomentose, all eglandular or the lateral 4 biglandular, the glands 0.5-2.2 mm long. Petals are pale pink, becoming pale yellow in age, glabrous, fimbriate, the lateral 4 with the claw 1-1.5 mm long, the limb is 5-8.5 mm long and 4-6 mm wide, the posterior petal with claw 2.5-3 mm long, constricted at the apex, the limb 5-7 mm long, 2.5-4.5 mm wide, broadly obovate, the basal fimbriae gland-tipped. Filaments are 2-4 mm long, the posterior 3 inflexed between the posterior styles; anthers with the locules sparsely pilose to glabrate, 0.3-1.2 mm long, the connectives 0.2-1.6 mm long, the anterior 5 longest and glandular, those of the anthers opposite the antero-lateral sepals exceeding the locules by 0.5-1 mm. Anterior style 2.8-3.2 mm long, straight, the posterior styles 3-4 mm long, diverging and lyrate at the base, the stigmas capitate.

Samara (Fruit) is appressed-pubescent to glabrate, with the dorsal wing 18-42 mm long and 8-22 mm wide, bearing a rounded tooth at the adaxial base; nut bearing prominent ribs on the side perpendicular to the areole, rarely with a short aculeate outgrowth, the locule hairy within.

First mention of Ayahuasca comes from early Spanish and Portuguese explorers and missionaries who visited South America in the 16th century, describing ayahuasca brews as “diabolic” and dangerous decoctions.

Although utilized among the indigenous tribes of South America for hundreds and perhaps even thousands of years, Ayahuasca was not recognized by westerners until 1851, when Richard Spruce, an English botanist, described it as a new species. He observed how Guahibos, the indigenous people of Llanos (Venezuela), chewed the bark of Ayahuasca instead of brewing it as a drink.

There are two scientifically accepted varieties:

The Ayahuasca vine is considered by those who use it into several different types, each of which have different potencies, effects, and uses. Different categorizations may be used in different areas, and this list is not meant to be exhaustive or universally applicable. 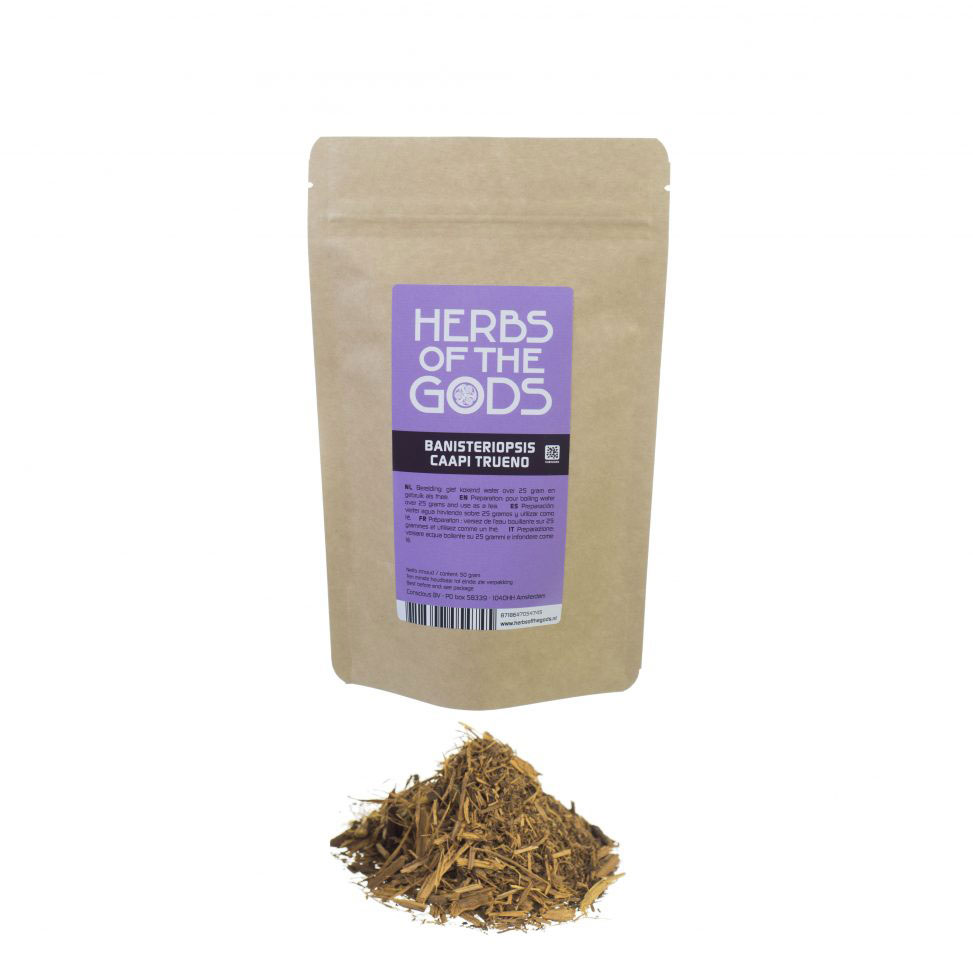 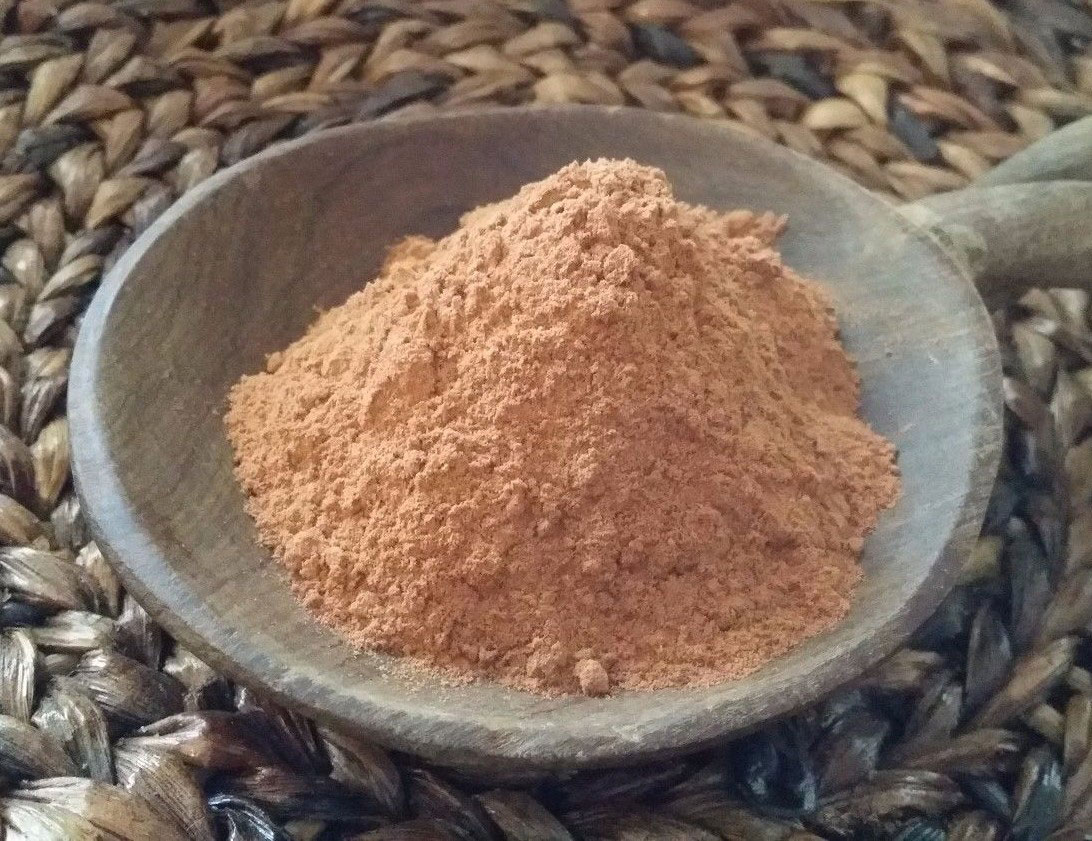 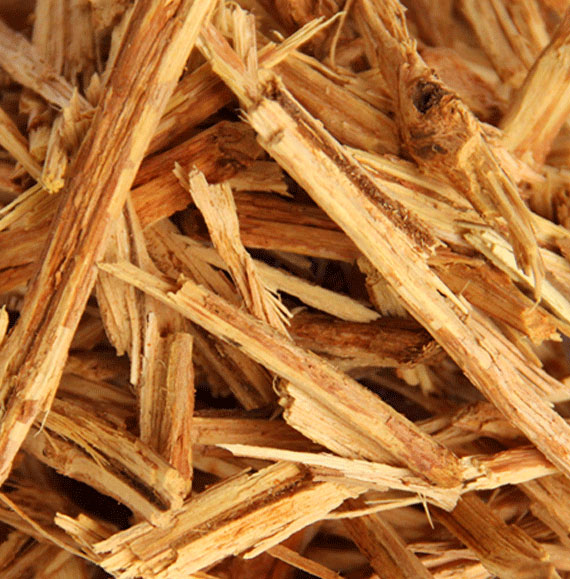 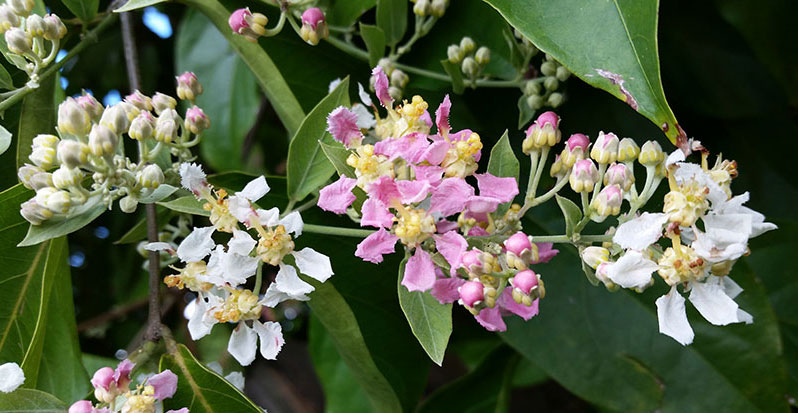 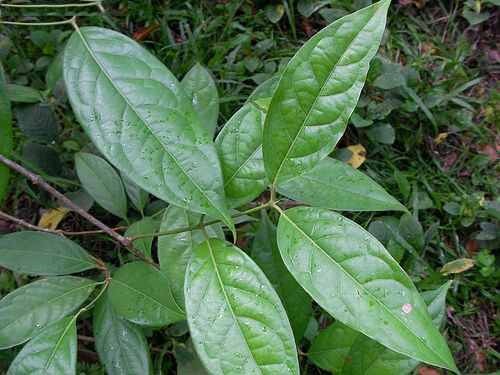 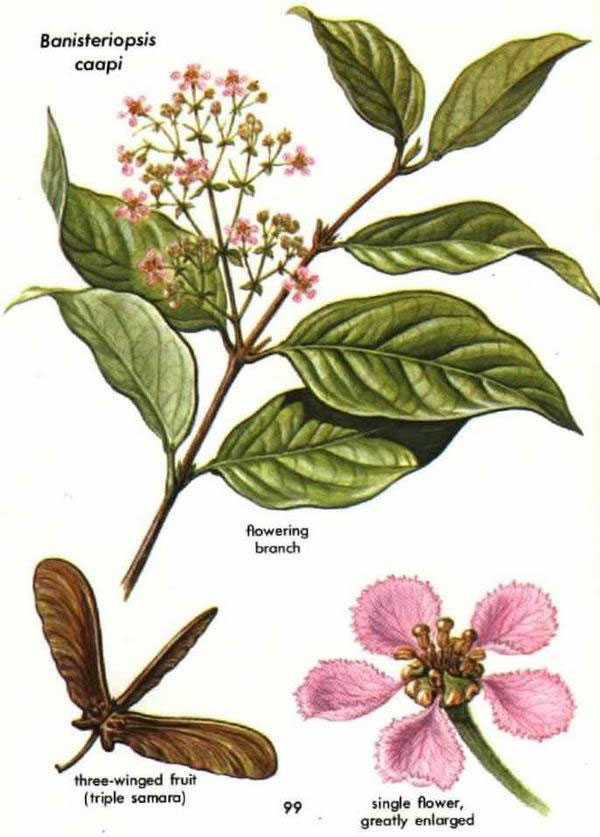 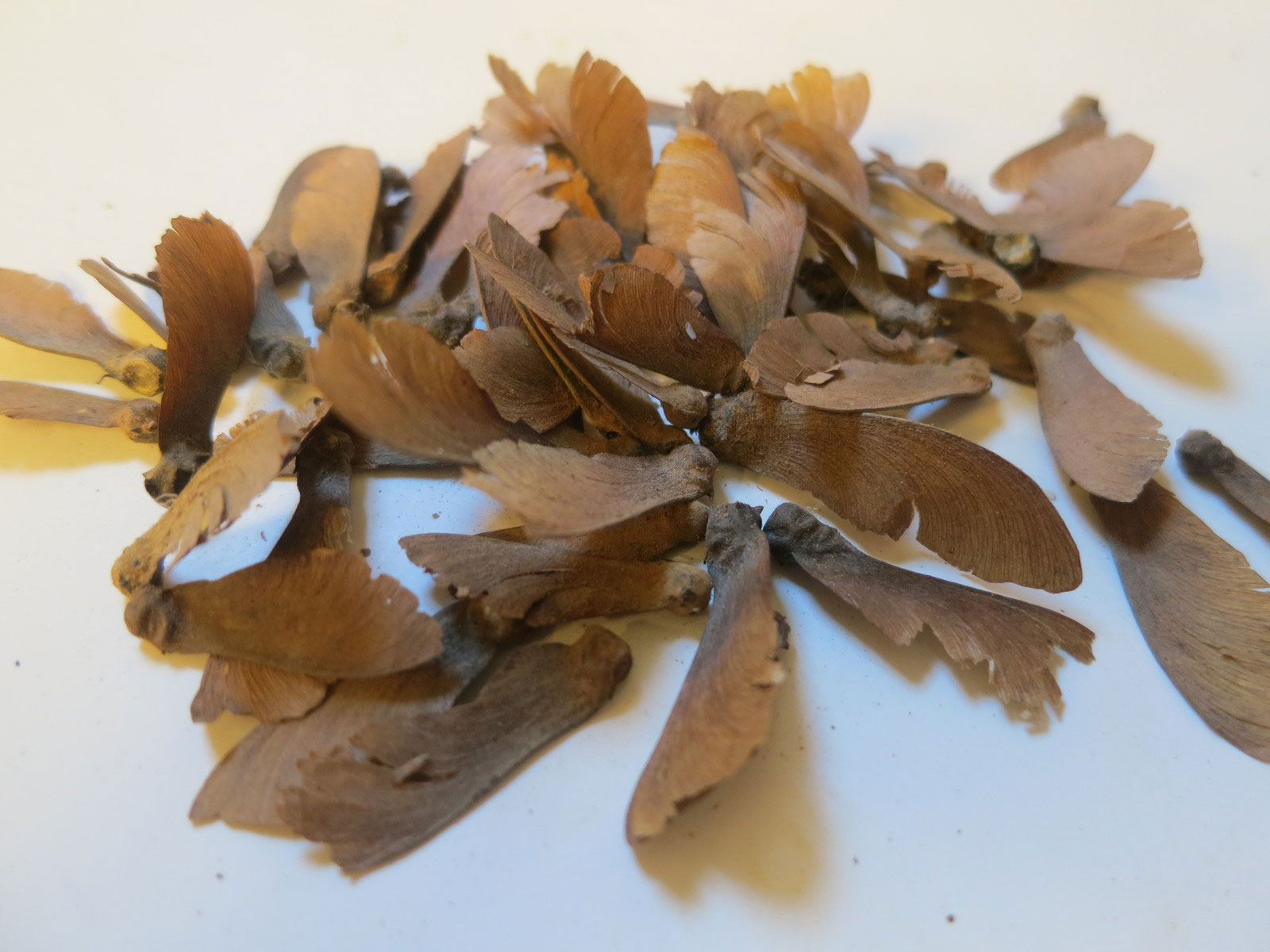 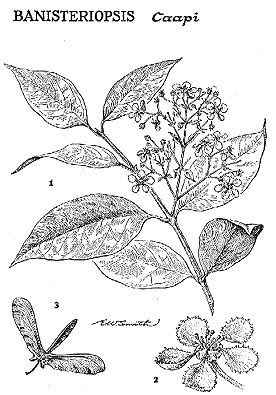 There is numerous health benefits related with Banisteriopsis Caapi. Choose among these options for what purpose you would like to have it!

Several researches have revealed that Ayahuasca helps people dealing with addiction, depression, and PTSD. Research showed that people taking just one dose of Ayahuasca presented significant progress as opposed to people in the control group.

Other researches also revealed that Ayahuasca has positive effects when addressing anxiety, depression, drug addiction, and mood disorders. Numerous studies are concentrating on the results of Ayahuasca on addiction issues, with hopeful conclusions.

In a study, 12 people dealing with severe behavioral and psychological problems connected to substance abuse participated in a program for four days. The program included 2 Ayahuasca ceremonies. Six months later, they’ve shown incredible improvements in terms of hopefulness, mindfulness, empowerment, and quality of life on all levels. Moreover, they reduced the consumption of tobacco, alcohol, and cocaine. Even if more research is required, scientists assume that Ayahuasca can also benefit people dealing with PTSD.(1)

If you are struggling with a lot of pressure and need to be mindful to focus on your tasks and errands that you have to run, then Ayahuasca is the best option. Research suggests that Banisteriopsis Caapi (ayahuasca) can help increase the brain’s mindful capacity, thus supporting our psychological well-being.

3. Helps clear the gut and digestive tract of worms and parasites

The harmala alkaloids found in ayahuasca are anti-parasitic agents that chemically kill the parasites without harming the individual. These antimicrobial agents also kill bacterial organisms such as E. coli, Salmonella, and yeast. Thus using Ayahuasca in the limited amount can be quite beneficial for eliminating parasites and other antimicrobial agents.

If you have been dealing with a negative state of mind or worthless mood lately, then you can definitely try Ayahuasca. It can provide you a great relief. According to research, Banistriopsis caapi (Ayahuasca) has a positive effect on mood and emotional regulation.

Ayahuasca increases blood flow to the frontal and para-limbic regions of the brain that are related with emotion processing and motivation. Similar to pharmaceutical antidepressants, this medicinal brew stimulates serotonin receptors, thus changing concentrations of the mood-boosting neurotransmitter in the brain. According to clinical research, ayahuasca had fast and continued antidepressant effects; even in recurring cases.

However, this still needs to be further researched. There is very few research available regarding the safety and efficiency of ayahuasca as a cancer treatment because legal restrictions make these studies difficult to proceed. In a Brazilian study conducted by Eduardo Schenberg of the University of Sao Paulo, the results showed that Ayahuasca actually has the potential to treat cancer. Schenberg wrote, “There is enough available evidence that ayahuasca’s active principles, especially DMT and harmine, have positive effects on some cell cultures used to study cancer, and in biochemical processes important in cancer treatment, both in vitro and in vivo”. Ayahuasca can increase the number of white blood cells that kill cancer cells. It can help kill cancer cells and suppress cancer cell growth by blocking glucose usage in cancer cells.

If you have been to a shocking event and the site of it haunts you every time you think about it, you might be dealing with PTSD (Post Traumatic Stress Disorder). The research suggests that Banisteriopsis Caapi might help the victims of PTSD.

Traditional uses and benefits of Ayahuasca