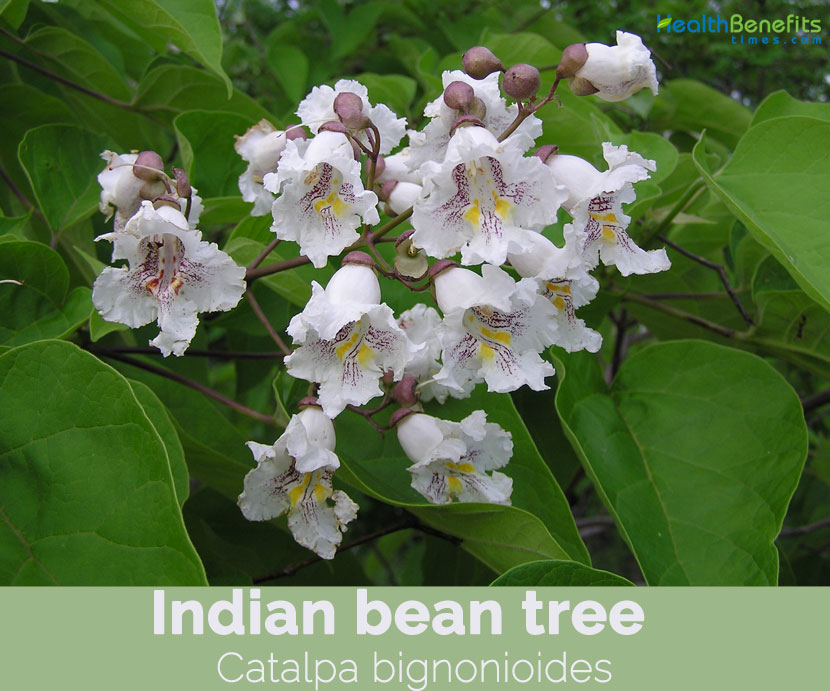 Indian Bean Tree is a small to medium sized, fast growing, moderately short-lived deciduous tree with a wide, spreading, round-headed crown that normally grows about 15–18 meters (49–59 ft.) tall, with a trunk up to 1 meter (3 ft. 3 in) diameter. The plant is found growing in rich moist soils by the sides of streams and rivers, Stream banks, gravel bars, road cuts, bottom land forests, and fence rows. The plant grows best on open, moist, well drained alkaline and deep soils, but can grow across a range of moisture regimes once established. The roots are fibrous and branches are brittle. Its juices are watery and bitter. Roots are poisonous and should not be handled or composted. The wood is of moderately light density (specific gravity 0.42 oven dry), with pale gray sapwood and grayish brown heartwood. It has a faint, aromatic, non-characteristic odor and no characteristic taste. It is ring porous, coarse-grained, soft, not strong, but very durable in contact with the soil.

Southern catalpa twigs are thick, stout, and brittle. Twigs are minutely hairy and pale orange to brownish-grey in color. Many short crooked twigs and branches support a wide-spreading, irregular crown. Lenticels are clearly present on twig surfaces, and are large, pale and numerous. The terminal bud is absent and lateral buds are small (1/16 inches long), sunken, brown, and solitary with six overlapping bud scales. Twig pith is solid and white in color. Usually 10-12 vascular bundle scars are clearly visible in a circle-shape within the leaf scar. Leaf scars occur 2-3 per node. Neighboring leaf scars on the same node are not connected by lines and there are no stipular scars. Southern catalpa stem periderm is light reddish brown to grey in color. Periderm on young trees begins smooth and thin, eventually flaking off into thin, narrow scales

Tree bark ranges from scaly to ridged, to blocky plates. On a mature tree trunk the bark may be from ¾ to 1 inch thick, light grayish brown in color, and broken into longitudinal, scaly, flat ridges. On young tree seedlings the bark is thin and easily damaged by impact, or rodents.

Two to three leaves grow from each node (an opposite or whorled leaf arrangement). Leaves are large, deciduous, simple, and broadly heart-shaped. Leaf margins are smooth, entire or slightly wavy. The leaf tip has an abruptly sharp point. The leaf base is heart-shaped and can occasionally have two small basal lobes. Leaves are connected to twigs with a long petiole that is about 3-6 inches long. Leaves are 5-10 inches long and 3-8 inches wide. Leaves are a bright medium green color and smooth on top, and paler green and slightly hairy (i.e. with trichomes) on the underside. Undersides of leaves are especially hairy on veins, with leaf hairs turning black by fall. Leaves produce an unpleasant aromatic odor when crushed. Leaves may scorch and drop during droughts. They turn an undistinguished yellow in the fall before dropping. They secrete nectar, a most unusual characteristic for leaves, by means of groups of tiny glands in the axils of the primary veins.

Flowers of Indian bean tree are large, white, and showy, blooming just after leaves have expanded. Trees are normally cosexual (a tree having both sexual parts in one flower) with perfect flowers. Flowers are slightly fragrant, and 1 to 1.5 inches long and wide. Flowering occurs from June to July in large upright, pyramid-shaped flower clusters 7-11 inches tall and wide. Flowers are predominately white with a bell or tube shape. Each flower has a variety of yellow to orange, and purple to purple-brown lines, markings, or spots on its inner surfaces. Flower tubes each have five unequal, rounded, and fringed lobes with two upper lobes larger than the three lower lobes. The lowest or bottom-most lobe is not notched. Flower has two visible ridges and presents two rows of yellow-orange spots (or stripes) as well as many purple spots on the inner side of the flower tube and lower lobe. There are two fertile stamens present. Flowers are good for honey production. 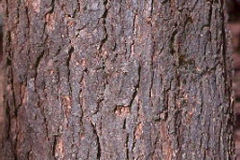 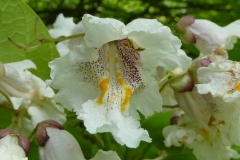 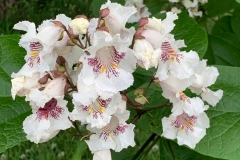 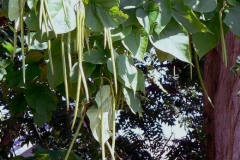 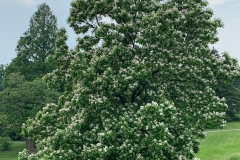 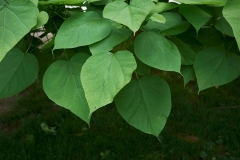 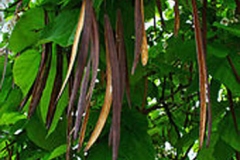 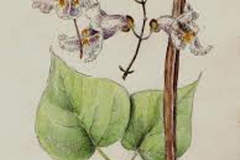 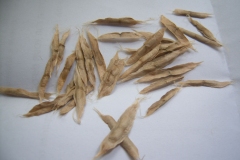 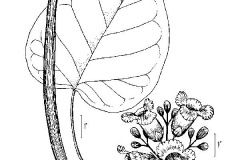 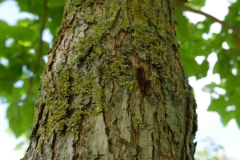 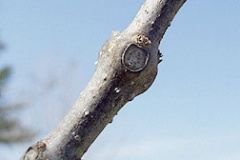 Fertile flowers are followed by long, slender, thin-walled, pod-like, two-celled capsules which dangle from ends of twigs. They look like long, thin, cylindrical pencils or cigars about 20–40 cm long and 8–10 mm diameter. Fruits are initially green which dries to a brownish color and eventually splits along two lengthwise seams. Fruits mature by October and are held on a tree until spring. Inside each fruit are many papery, thin, flat seeds with two long-pointed wings which have tufts of fringe hairs on each end.

Seeds with wings are 1-2 inches long and 1/4 – 1/3 inch wide. They have a light brown coat and wings rounded at the ends terminating in a fringe of short hairs. There are approximately 20,480 seeds per pound. Seeds which are collected after overwintering in the mature seedpod have a higher germination rate than those collected in the fall and stored.