Trending
You are at:Home»Herbs and Spices»Traditional uses and benefits of Birdsfoot Trefoil 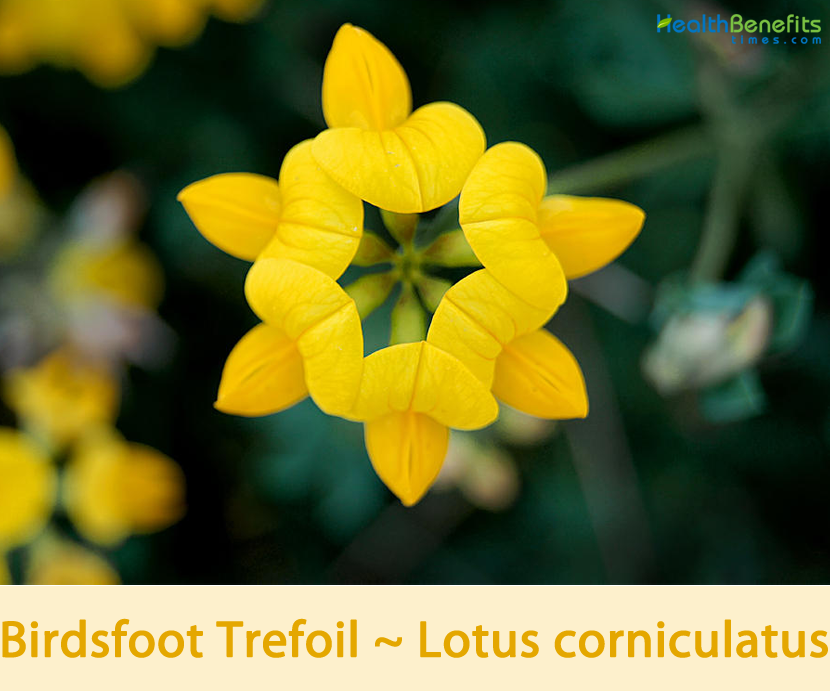 Genus name comes from the classical Greek name lotos applied to many plants including clover, bird foot trefoil and fenugreek. The specific epithet corniculatus means having small horns or spurs. The common name bird’s-foot comes from the similarities in appearance between the clusters of long, narrow seed pods and a bird’s foot. The term trefoil refers to the three leaflets that make up the compound leaves of this plant. It is known as Bird’s-foot-trefoil as it produces seedpods arranged in a bird’s foot pattern. It is often used as forage and is widely used as food for livestock due to its non-bloating properties. The plant is harvested from the wild for local use as a medicine, dye and possibly food. It is often grown as a green manure and soil improver. It has become widespread outside of its native range due to purposeful planting for erosion control and as forage for livestock. It is now considered an exotic invasive weed in parts of the United States, Canada, and Australia.

Birdsfoot Trefoil is a short to medium-lived, invasive low-growing, slightly-decumbent, herbaceous perennial plant that normally grows about 5 to 20 centimeters (2 to 8 inches) tall, occasionally more where supported by other plants. It is an extremely variable prostrate or ascending, hairy or hairless perennial herb. The plant is found growing in pastures and sunny banks of streams, grassy places, moist to dry roadsides, waste places, lawns in the lowland, steppe and montane zones, thickets, scrub, damp meadows, alpine mead­ows, rocky slopes, ravines, river valleys, abandoned fields, cultivated ground, roadside embankments, slopes of drainage ditches, weedy corners of parks, and miscellaneous waste areas. It can grow on a wide range of soils and does best on soil with a pH ranging from 6.2 to 6.5 or above. It is tolerant of wet acidic soil (pH = 4.5) and has some drought tolerance. Bird’s foot trefoil can withstand some soil salinity.

The stems of L. corniculatus are nearly square, erect or sprawling on the ground, branched, either smooth or sparsely hairy, and up to one and a half feet long. Numerous stems arise from a basal, well-developed crown with branches arising from leaf axils.

Flowers are arranged in axillary umbels in groups of two to eight at the tip of a long, naked stalk arising from leaf axils along branching stems. Peduncles are stout and 3 to 10 cm long. Flowers are 10 to 18 mm long. Calyxes are glabrous or sparsely hairy with linear to lanceolate teeth that roughly equal the length of the tube. Corollas are yellow, sometimes red-tinged, and 8 to 15 mm long. Corollas consist of five petals each; however, the lower two petals are united to form a keel. Flowers may turn orange, sometimes streaked red. Flowering normally takes place in between June to September.

Fertile flowers are followed by narrowly cylindrical pods that are 15-30 mm long and 2-3 mm wide, brown to almost black, borne at right angles to the top of the peduncle (hence ‘bird’s-foot’ trefoil as the common name). They consist up to 49 seeds and have a persistent style at the apex. Seeds are irregularly rounded, somewhat flattened, 1.3-1.5 mm long, variable in color at maturity, olive to brownish to almost black, frequently speckled and shiny.  Seeds are ejected from the pods as the pods rupture at maturity, averaging 375,000 seeds per pound. 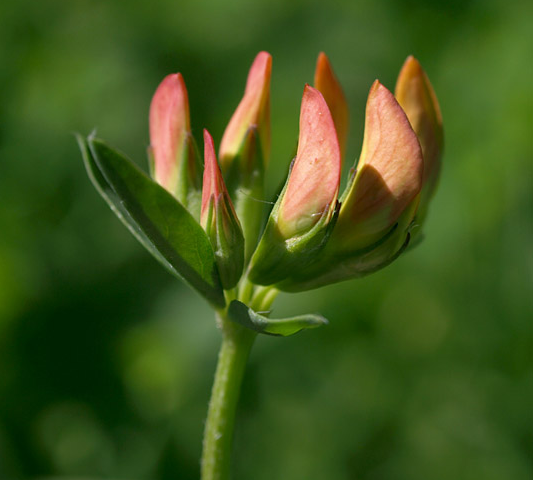 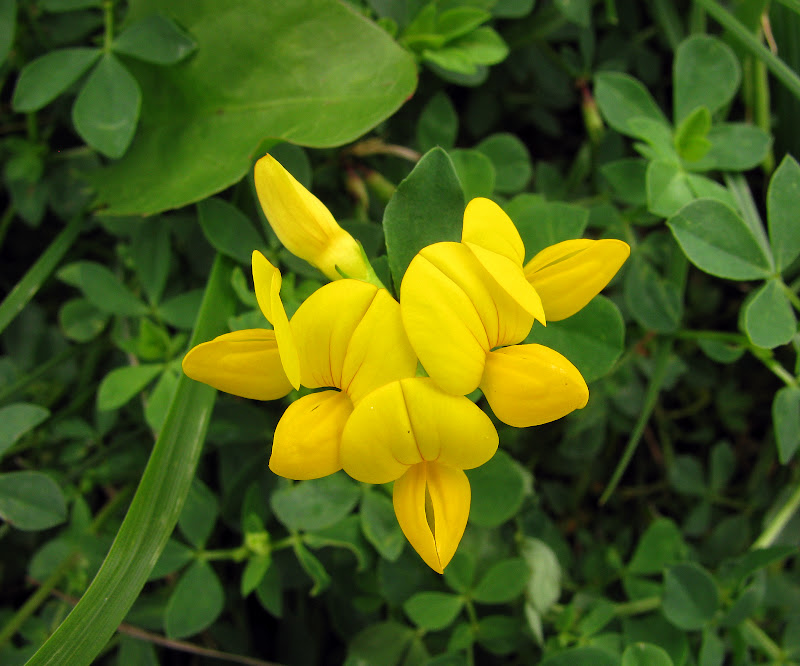 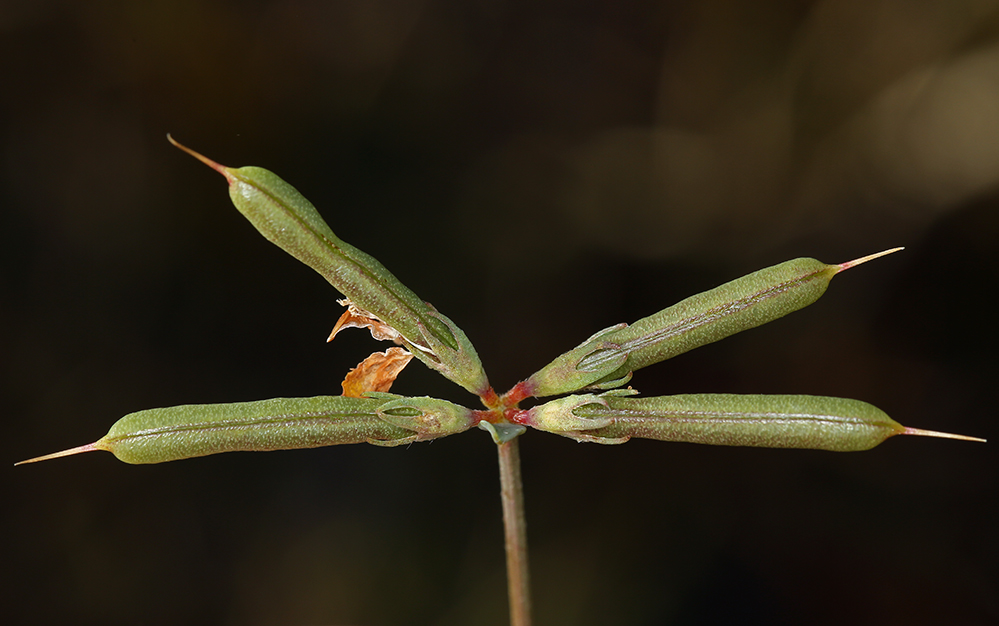 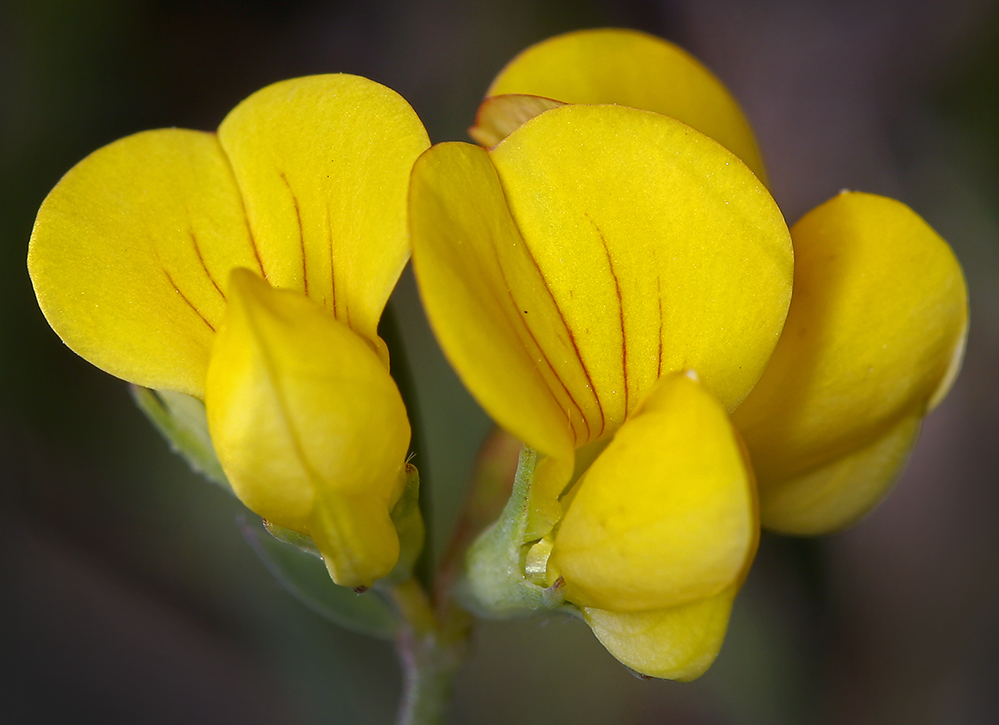 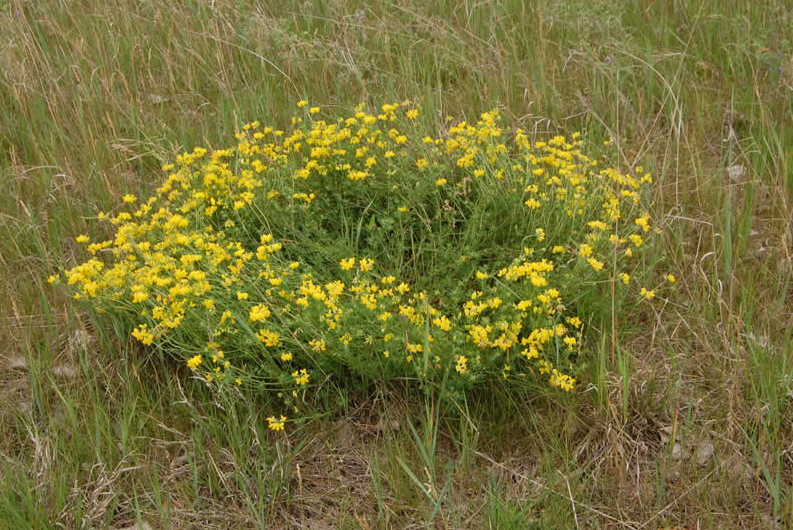 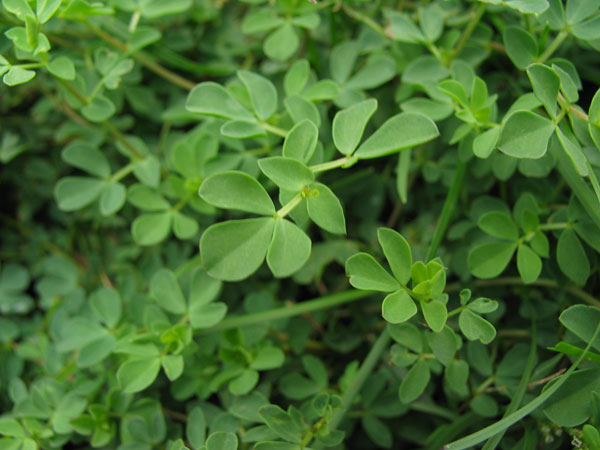 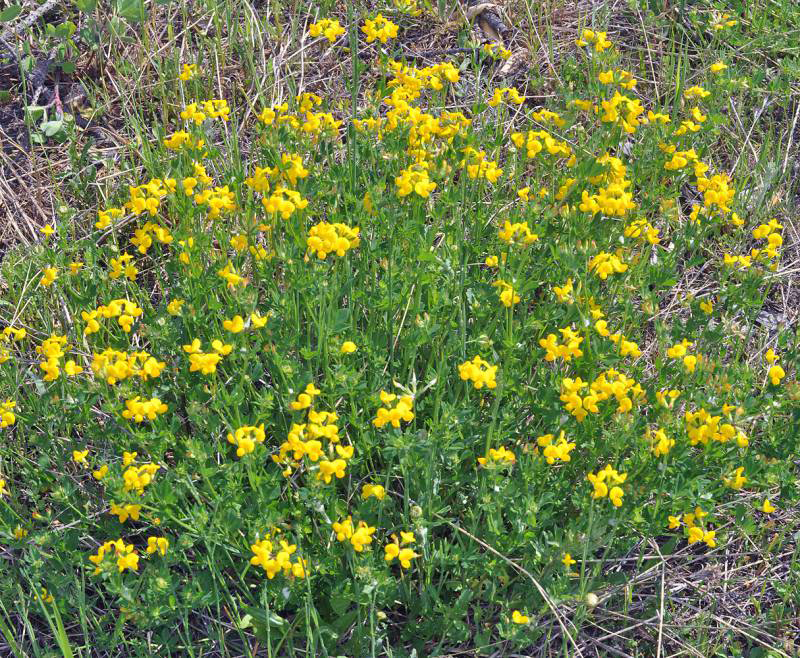 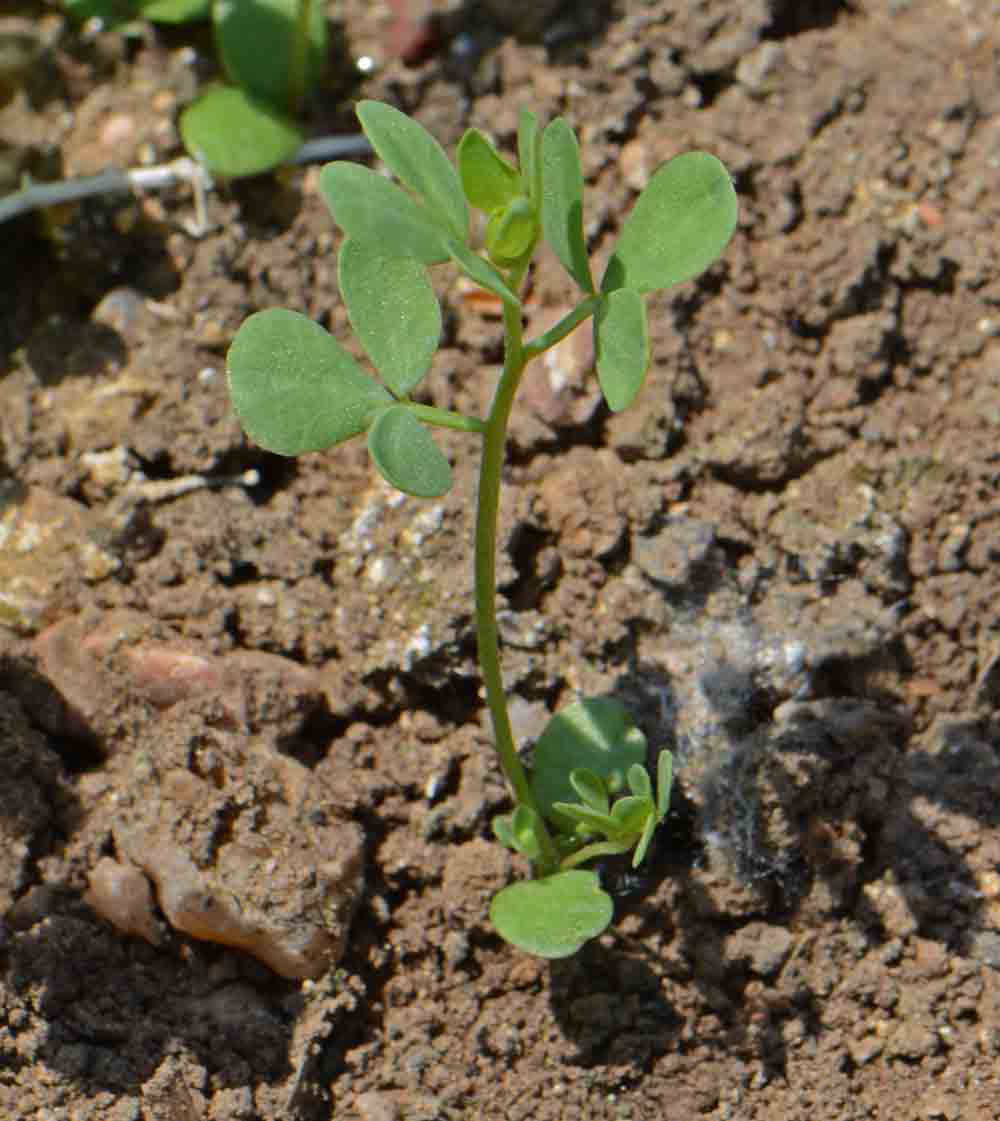 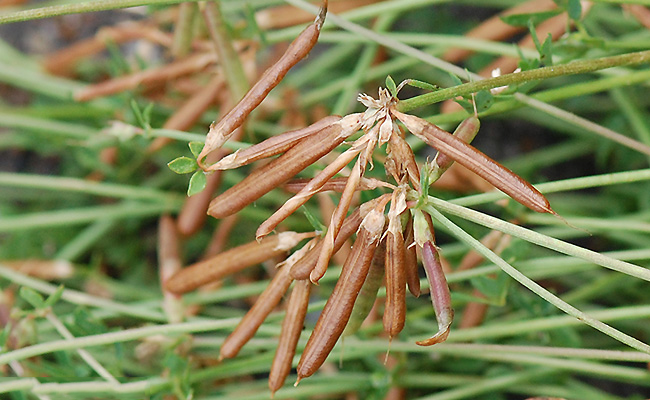 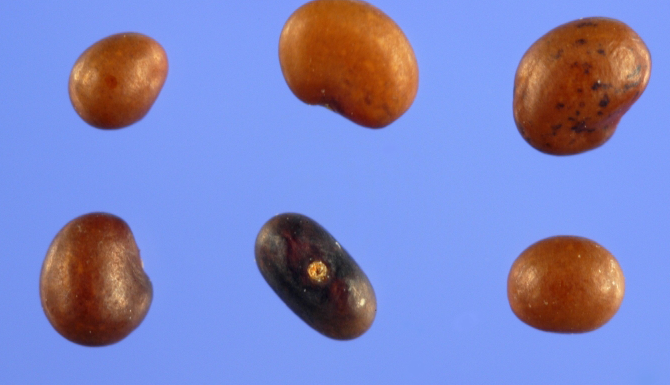 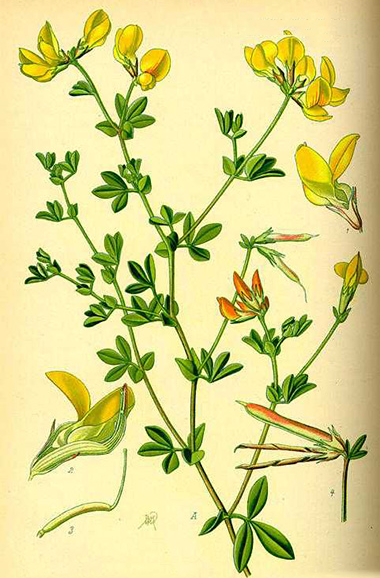 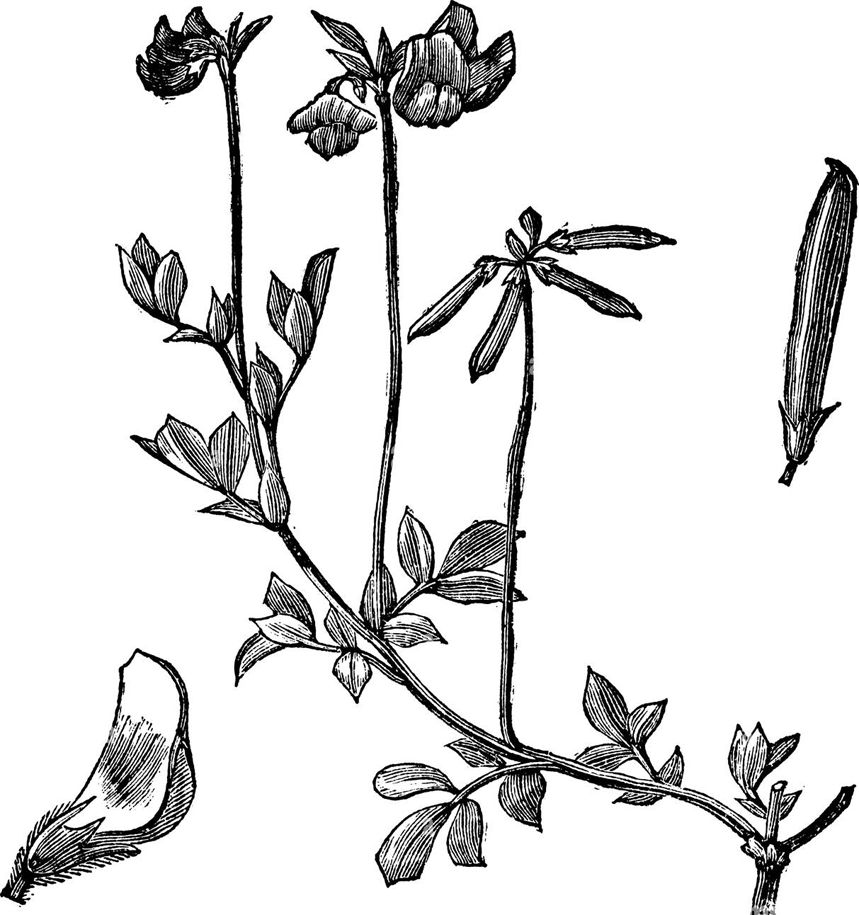 To control small infestations of L. corniculatus, dig up plants by roots, making sure to remove all root fragments. For larger infestations, frequent mowing (more than once every 3 weeks) at a height of less than two inches for several years helps to control the plant but may set back native plants. Controlled burns of L. corniculatus are not recommended because they increase seed germination and promote seedling establishment.

Lotus corniculatus can be effectively controlled with general use herbicides such as: clopyralid, glyphosate, and triclopyr. Jones & Turkington report that morfamquat, ioxynil plus mecoprop, 2; 4-D-mecoprop, dichlorprop, fenoprop, and dicamba are effective herbicide treatments on L. corniculatus, while MCPA-salt, 2, 4-D-amine and ester has no effect. Acumen and basagran MCPB are considered very toxic herbicide treatments for L. corniculatus seedlings. Considerable damage to seedlings was caused by: brasoran, gesagard, and opogard; EPTC was considered an ineffective treatment. L. corniculatus showed no response to carbofuran or benomyl. Spot spraying affected areas, (after re-greening from a burn or mowing), with clopyralid + surfactant + dye. (This selective herbicide also affects native plants of the sunflower and pea families.)