Trending
You are at:Home»Herbs and Spices»Facts and Benefits of Bistort 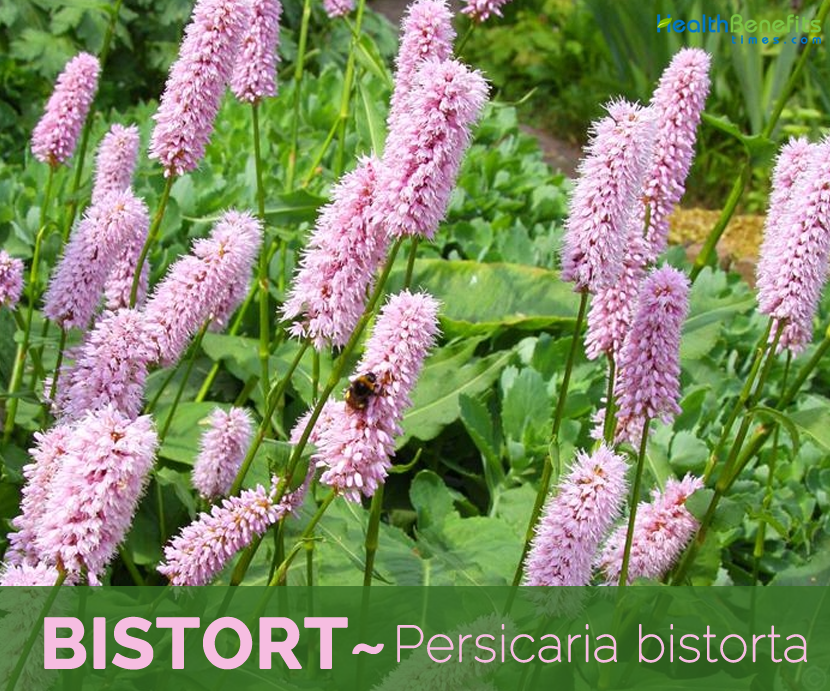 Persicaria bistorta, commonly known as bistort or European bistort, is a species of flowering plants in the dock family Polygonaceae, previously included in the genera Polygonum or Persicaria. Some of the most common names given to it are snakeroot, snake-root, snakeweed, Easter-ledges, Common bistort, poor man’s cabbage, oderwort, meadow bistort, adderwort, osterick, pink pokers, English serpentary, dragonwort, Easter mangiants, Easter giants, easterman giants, pudding grass, passion dock, sweet dock, patience dock, Passions, Red Legs and Sweet Dock. The plant is a native of Europe but is often cultivated and has become naturalized in other parts of the world such as in the United States in New England. It is typically found growing in moist meadows, nutrient-rich wooded swamps, forest edges, wetlands, parks, gardens and disturbed ground. Genus name comes from the Latin persica meaning peach-like and sagittata meaning barbed or arrow-shaped in reference to the shape of the leaves.

Bistort is an herbaceous, perennial, flowering plant that grows about 75 cm (30 in) tall by 90 cm (35 in) wide. The plant is typically found growing in moist meadows, nutrient-rich wooded swamps, forest edges, wetlands, parks, gardens and disturbed ground, field, hilly grasslands and meadows. It is best grown in organically rich, consistently moist, moisture-retentive soils rich in silicic acid. The plant has fleshy and cylindrical, thick, twisted rootstock. It has a brownish-black color on the outside, while internally its color is red. Stem is simple and erect, cylindrical, knotted at the joints, striated, smooth unbranched and hairless.

The leaves which spring directly from the upper side of the root system are oval with heart shaped bases of a bluish green cooler, on the upper sides and ash grey, often tinged with purple beneath. Both the leaf stalks and the leaf blades are about six inches (15 cm) long. The upper part of the leaf stalk is winged. Those of the stem are all smaller, clasping and almost stalk less, each as long membranous stipule.

The flowers are arranged in a terminal, dense, cylindrical spike. Each tiny individual flower is supported on a very short stalk, with shining, serrate membranous bractea (very small bracts) at the base. Each flesh-pinkish flower consists of five colored sepals, eight stamens and an ovary of two or three styles. Flowers are grouped in two’s, one flower complete, the other with normal stamens but only a rudimentary ovary. The styles of this complete flower do not mature and become receptive of pollen from visiting insects, till their stamens have shed their pollen and fallen, hence cross-fertilization is ensured. Flowering normally takes place from June and July.

The fruit (seed capsule) is a triangular pointed nut containing a single seed and surrounded by a persistent calyx. Birds often feed on the seeds, which were once utilized to feed and fatten poultry.

Traditional uses and benefits of Bistort

Bistort tea benefits believed to be imparted by this brew:

A gargle, to treat infection in the mouth and throat, can be made by using one or two grams of the dried rhizomes to one cup of warm water. It should then stand and brew for five hours.

Medicinally, bistort is used in the form of decoction and tincture.

Decoction: To prepare a decoction from bistort add one teaspoonful of the dried out herb to one cup (250 ml) of water and boil the mixture. Seethe it for about 10 to 15 minutes and then strain the liquid. For best results, this decoction should be drunk thrice every day. It can also be used externally in the form of a gargle or mouthwash.

Tincture: The tincture prepared from bistort needs to be taken in dosage of 2 ml to 4 ml thrice every day.