Trending
You are at:Home»Fruits»Facts and benefits of Bitter Cherry 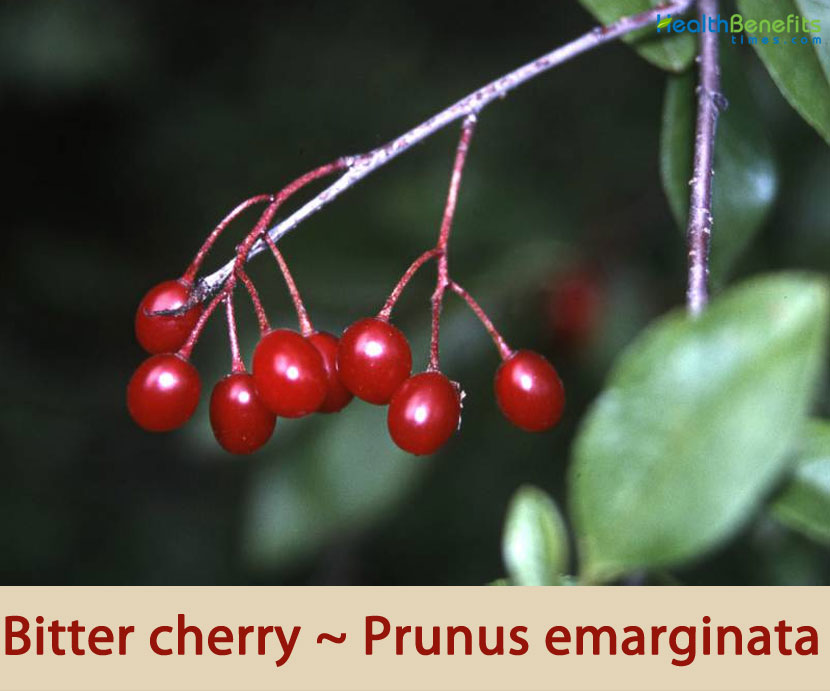 Prunus emarginata popularly known as bitter cherry or Oregon cherry is a species of Prunus belonging to Rosaceae (Rose family). The plant is native to western North America, from British Columbia south to Baja California, and east as far as western Wyoming and New Mexico. It is often found in recently disturbed areas or open woods on nutrient-rich soil. Bird Cherry, Wild Cherry, Wild Plum, Bitter cherry, and Quinine Cherry are some of the popular common names of the plant. The plant is harvested from the wild for local use as a food, medicine and source of materials. It is sometimes grown as an ornamental.

Bitter cherry is an unarmed, deciduous, thicket forming shrubs or small tree with spreading to ascending branches that normally grows about 1–15 meters (3.3–49.2 ft.) tall. The bole can be 30 cm or more in diameter. The plant is found growing in moist woods, watercourses in grassland, sagebrush desert, gravelly or sandy soil along streams, rocky mountain slopes, subalpine, thickets on exposed sites, cutover and burned areas, understory of conifer and oak forests, open forest, valleys, montane, ridgelines and woodland margins. It grows best on moist, loam or sandy loam soils with good drainage, but also grows on dry, exposed sites. Roots may spread up to 50 feet (15 m) from the parent plant, sending up adventitious shoots along their length.  Bitter cherry has no taproot. The bark of older trunks and branches peels horizontally, while that of younger twigs is smooth, reddish-brown, and somewhat shiny with scattered grayish red areas. The twigs are round in cross-section and 2 mm or greater in diameter.

The leaves are long, thin, egg-shaped and from 2–8 centimeters (0.79–3.15 in) long. They are alternate on the stems, and have a pair of knob-like glands at the base. They are yellowish-green with unevenly sized teeth on either side. The upper surface of the leaf is smooth while the underside may be somewhat hairy. The margins are serrate. Leaves turn yellow in the fall.

Flowers are small, hermaphrodite (have both male and female organs) 10–15 millimeters (0.39–0.59 in) diameter, with five white petals, 5 smaller and green sepals and numerous nearly 20 hairs like stamens. They are almond-scented, and produced in clusters in spring, and are pollinated by insects. Flowering normally takes place in between April and June.

Fertile flowers are followed by drupe like, ovoid juicy cherry 7–14 millimeters (0.28–0.55 in) diameter, which, as the plant’s English name suggests, are bitter. They have red or purple colored thick skin and consist of single seed.  As well as reproducing by seed, it also sends out underground stems which then sprout above the surface to create a thicket. 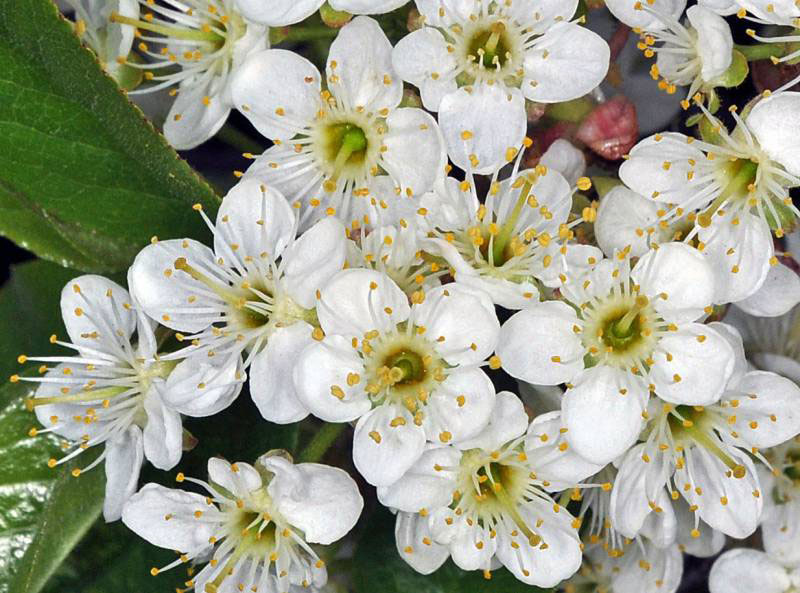 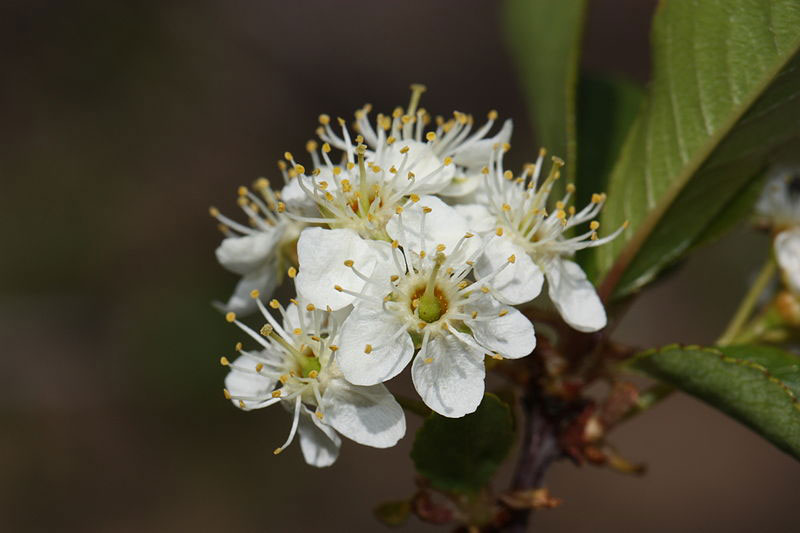 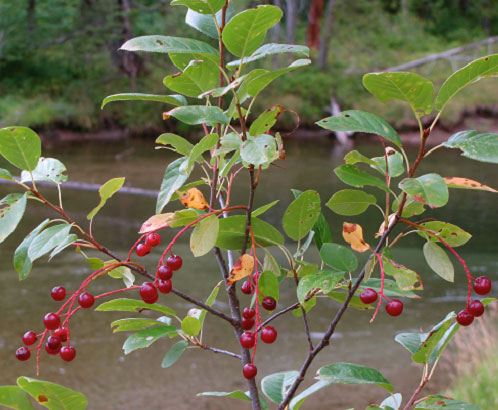 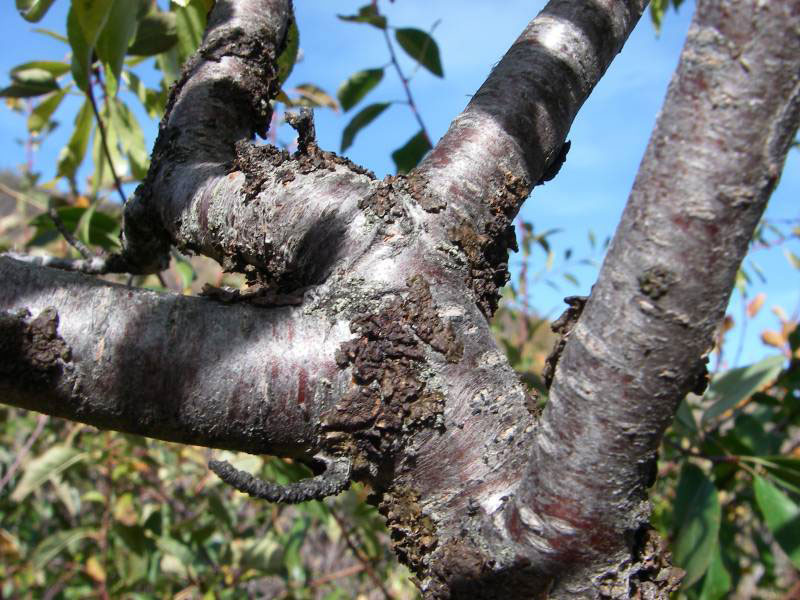 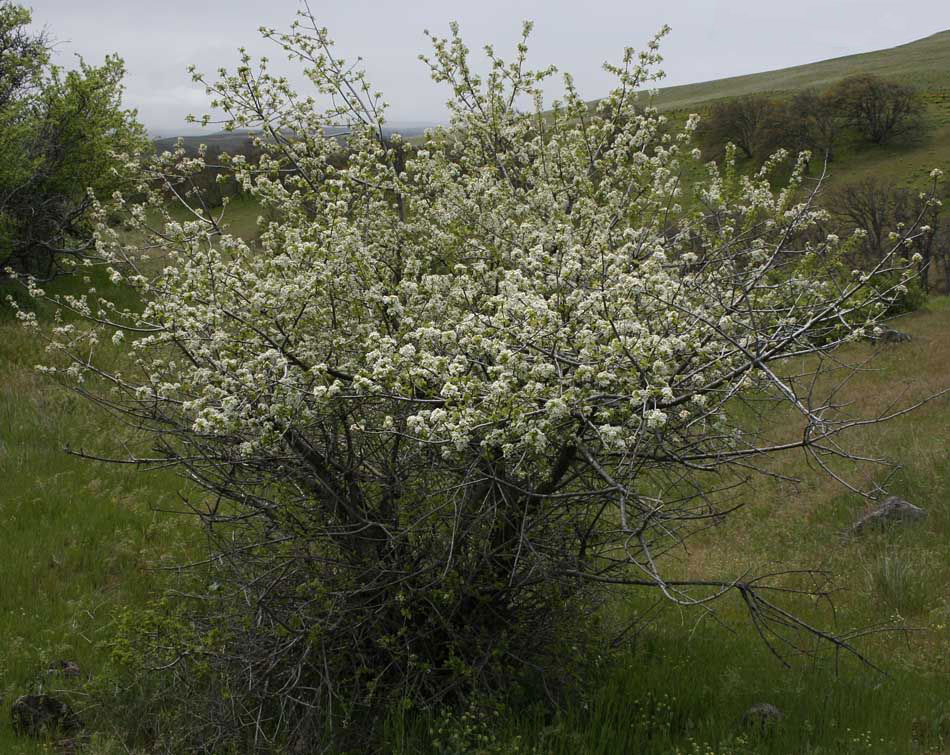 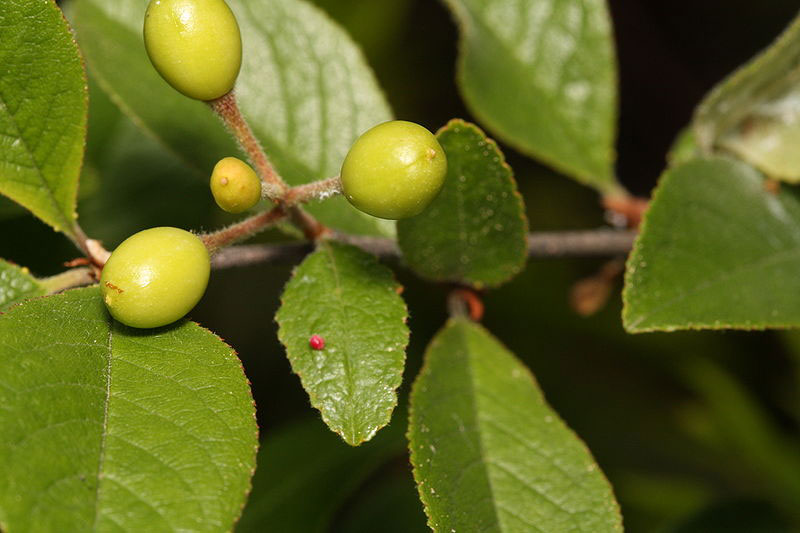 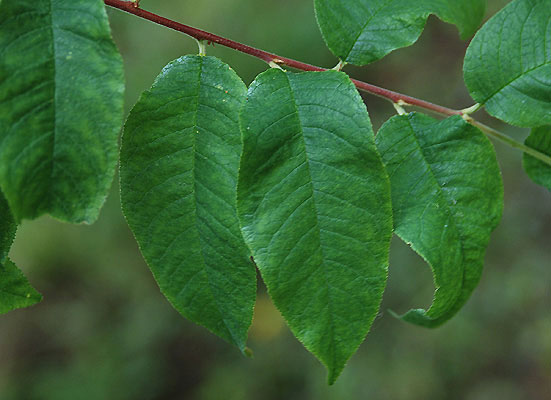 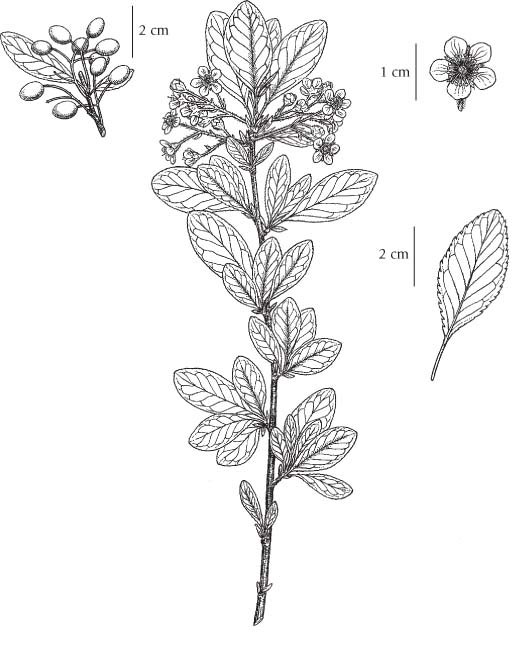 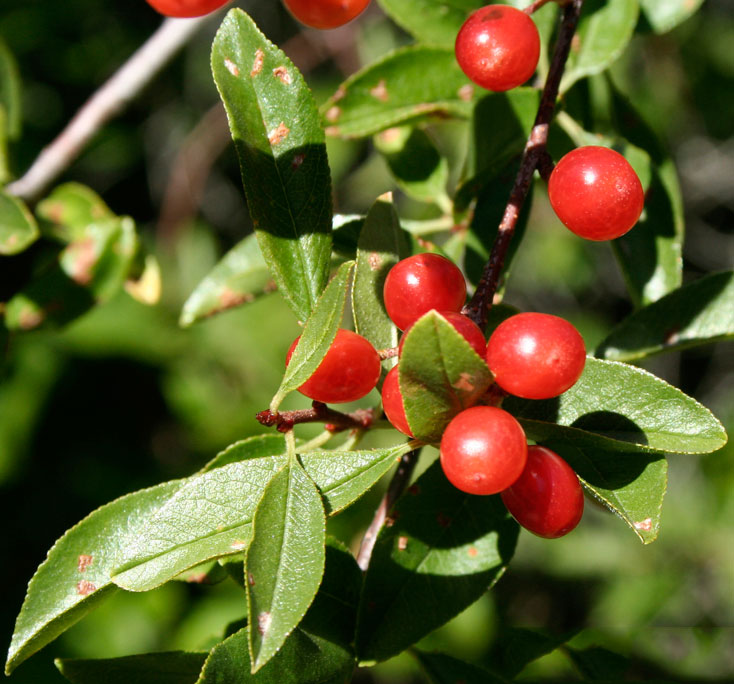 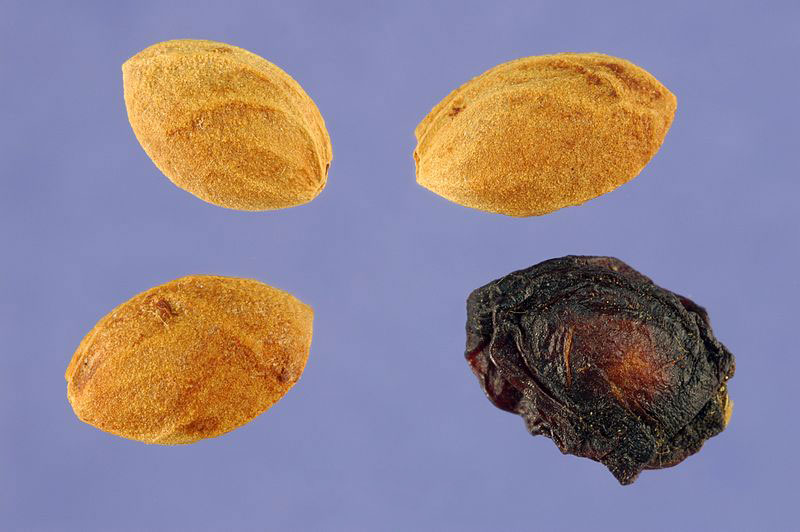 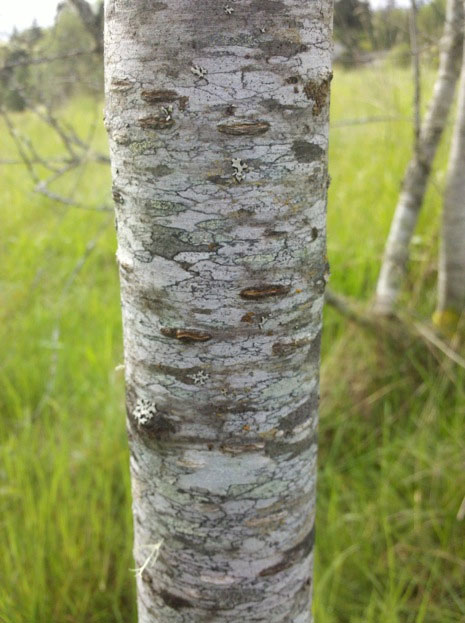 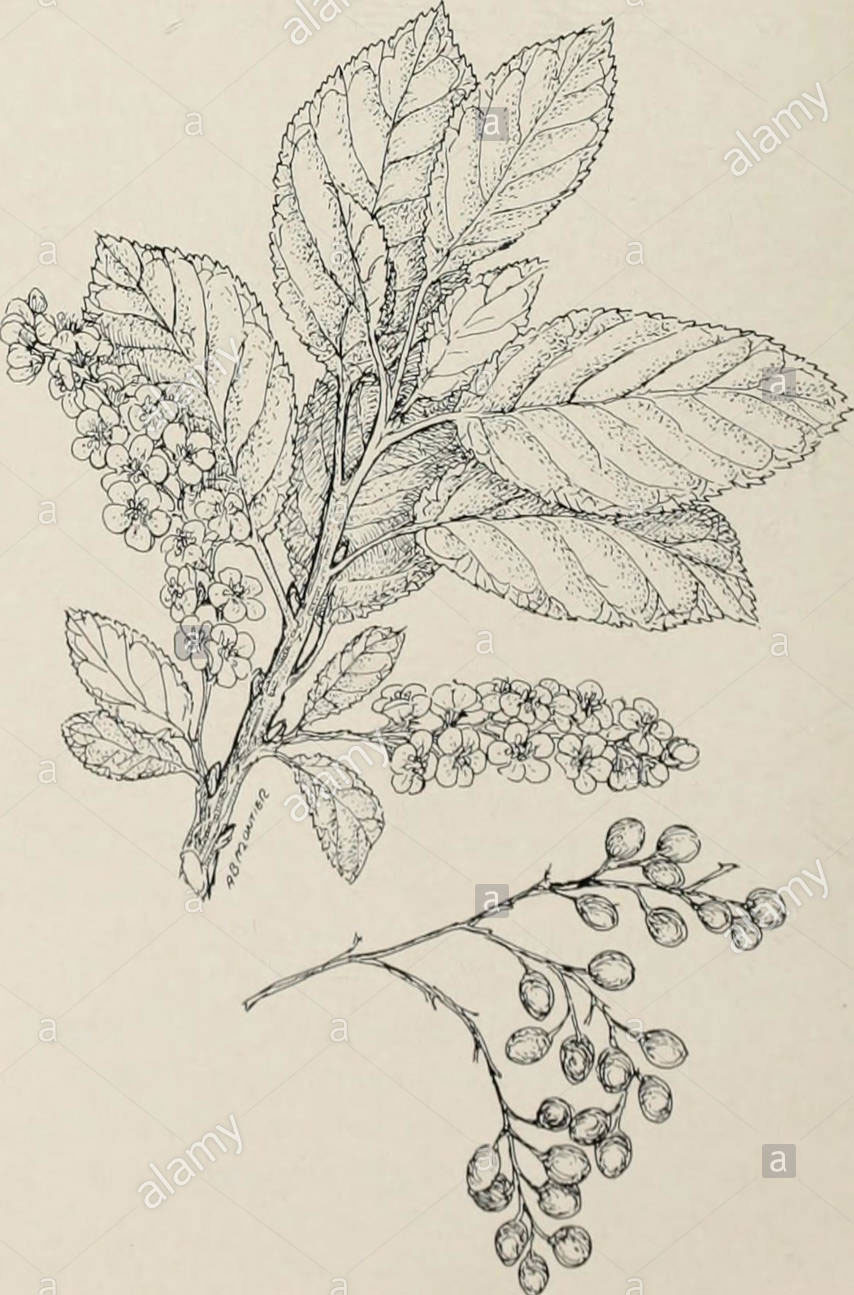