Trending
You are at:Home»Herbs and Spices»Know about the Black Bryony (Ladies Seal) 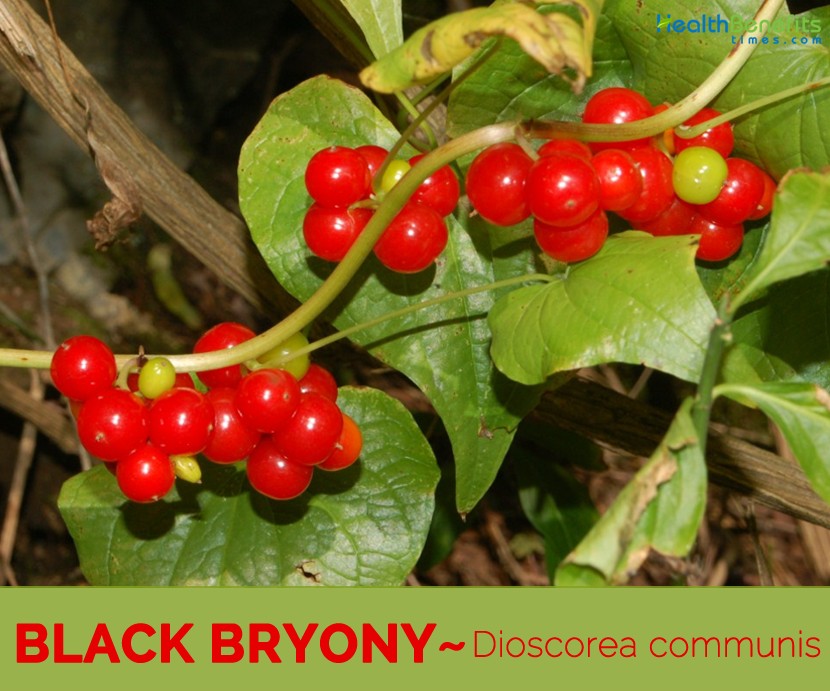 Dioscorea communis commonly known as Black bryony, Black bindweed, Lady’s-seal, Norça and bryony is a species of flowering plant in the yam family Dioscoreaceae and is native to the southern and central Europe, northwest Africa and western Asia, from Ireland to the Canary Islands, east to Iran and Crimea. The name of the species comes from the Latin “communis”, and means common, diffused, known. It is a climbing hedgerow and woodland edge plant which is actually highly poisonous that flowers between May and August and produces red and shiny berries that can be seen, covered in frost, in winter.

Black Bryony (Ladies Seal) is a climbing herbaceous plant that grows about 2–4m (6.5-13ft) tall. The plant is normally found growing in forest understory, from the sea to the mountains, usually in dense woods, but it can also be found in meadows and hedges. It prefers sandy, loamy and clay soils, requires well-drained soil and can grow in heavy clay soil. The plant also prefers acid, neutral and basic (alkaline) soils. The plant has a large, fleshy root that is almost cylindrical with a diameter of 2 to 3 cm. The root is 6 to 8 cm long and has scattered, thin root fibers. Externally, the root is blackish-brown. Internally, it is whitish and produces a slimy paste when it is peeled. Stem is very long, slender, angular or round, branched. Weak stems twins clockwise around anything within reach, climbing or creeping amongst trees, bushes and undergrowth. The stem dies back in winter but the root is perennial.

Leaves are heart-shaped pointed 10cm long by 8cm wide (4in by 3in), with a petiole up to 5cm (2in) long, are smooth with a shiny appearance as if they have been varnished, turning dark purple or bright yellow, the stems die down in the winter.

The flowers have a bell-shaped perianth, and are small, yellowish-green, and regular, in axillary racemes on long stalks. The plant is dioecious. The male flowers are solitary or grouped in slender racemes, branched at the base, with 6 stamens inserted on the base of the perianth-segments. The female flowers are in shorter racemes, bent back, few-flowered, with a perianth adhering to the ovary, and short functionless stamens. The bracts are very small. The limb of the perianth is 5-partite. There is a single style. Flowers are found on various plants in fertile and infertile form. The fertile flowers develop into crimson berries. Berries are initially green and are scarlet red when ripe. The berry is oblong, few-seeded, and imperfectly 3-celled. Each berry contains (3) 6 globose seeds of red-brick or brownish color.