Trending
You are at:Home»Herbs and Spices»Traditional uses and benefits of Black Honey Shrub 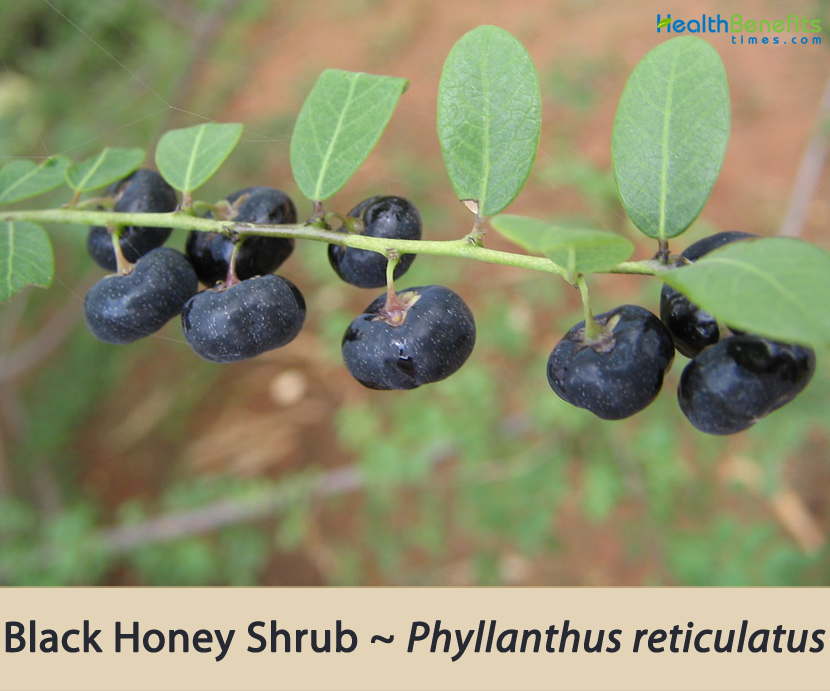 Black-Honey Shrub scientifically known as Phyllanthus reticulatus is a much-branched climbing shrub belonging to Phyllanthaceae (Amla family). The plant is native to Old World tropics, from tropical Africa to India, Pakistan, Sri Lanka, Burma (Myanmar), Indo-China, southern China, Thailand and South-East Asia, and south to Queensland (northern Australia). It has been introduced into the West Indies. It occurs throughout tropical Africa, except in the most humid, equatorial areas, and also in Egypt and northern South Africa. Some of the popular common names of the plants are Black-honey shrub, Reticulated leaf-flower, Black-berried feather foil, Potato-bush, Netted-leaved leaf-flower, Neernelli, Potato plant, Potato smell, Inki pazham and Neeroli.

The genus name Phyllanthus is based on the Greek word meaning leaf flower (phyll – leaf and anthus – flower); because in some species of the genus the flowers are produced at the edges of leaf-like branches. The species name reticulatus means nettled and refers to the netting of the leaves. This is an Asian species of Phyllanthus (but it was also introduced to Jamaica) and has been confused with P. polyspermus. In Vietnamese its name is phèn đen (sometimes diệp hạ châu mạng). It is also found in Northern Australia, where the aborigines of the Moyle River area use the wood for fire sticks and call it Mirriny mirriny. It is a multipurpose plant, providing a range of medicinal uses and other commodities for the local people, as well as a possibly edible fruit. The fruit is occasionally sold in local markets. The root bark, stem bark and leaves are collected from the wild and traded in local markets.

Black honey shrub is an erect or somewhat climbing, dense, quick-growing, deciduous, many-branched shrub or small bushy tree that normally grows up to 1.5 to 5 meters tall (in Africa rarely up to 18 m tall). Trunk is up to 15 cm in diameter. It sometimes adopts a more climbing habit. The plant grows along watercourses, in scrub and hedges, on waste places, in mixed evergreen forest, thickets, roadside, boundary of pond, stream banks, lake shores, in moist deciduous and semi-evergreen forests, forested areas, open places, floodplain grassland, sand dune scrub, littoral scrub, dune forest, rain-forest occasionally on termitaria, miombo woodlands and often beside seasonal rivers and streams. It grows best in deep moist soil, but can also tolerate sandy but not too dry conditions. This plant is best planted together with other taller bushes where it can scramble. The bark is light reddish-brown or grey-brown with hairy stems when young, which become smooth with age.

The leaves are arranged alternately along slender branches which is dark brown and woody towards the base, and green towards the tips. Leaves are green, ovate-oblong to elliptic, 3-5 cm long and 2-3 cm wide produced on short lateral branchlets, looking like leaflets of a compound leaf with a smooth upper surface and a prominent midrib. The leaves are thinly textured, usually hairless. They have a noticeable reddish net-veining which is more visible above than below.

Both male and female flowers are clustered on the tips of short slender branches that are about 3 cm long. The flowers appear before or with the leaves. The plant has very small about 1-1.5mm long, greenish-yellow flowers with a reddish tinge. One female and a number of male flowers are grouped together. male flowers with 5(-6) stamens in two sets, one with longer filaments fused into a central column and one with shorter, free filaments, anthers free, dehiscing longitudinally; female flowers with a superior subglobose ovary, crowned by 2-lobed styles. They are pollinated by ants and small insects. It flowers from September to October, but the flowering season can extend from July onwards. The flowering shoots and pedicels are covered in short, velvety hairs.  The flowers of this plant are responsible for the strange smell of potatoes which is often encountered along river banks in the Lowveld, particularly on spring and summer evenings.

Fertile flowers are followed by very small, roundish, depressed-globose berry like fruits about 4-6 mm in diameter. They are initially green turning to bluish black when ripe with dark purplish pulp. These fruits contain 8-15 tiny seeds which are trigonous, brown in color, about 1-2 mm long. 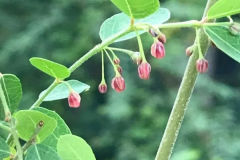 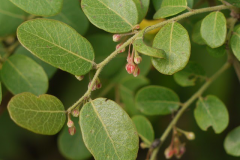 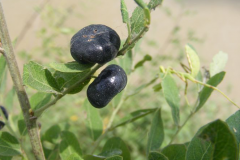 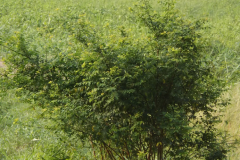 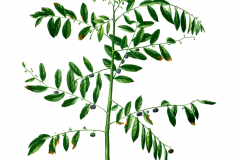 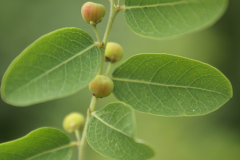 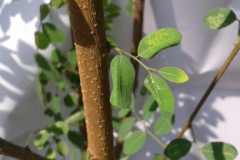 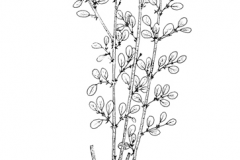 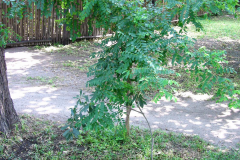