Trending
You are at:Home»Herbs and Spices»Facts about Black Root (Culver’s Root) 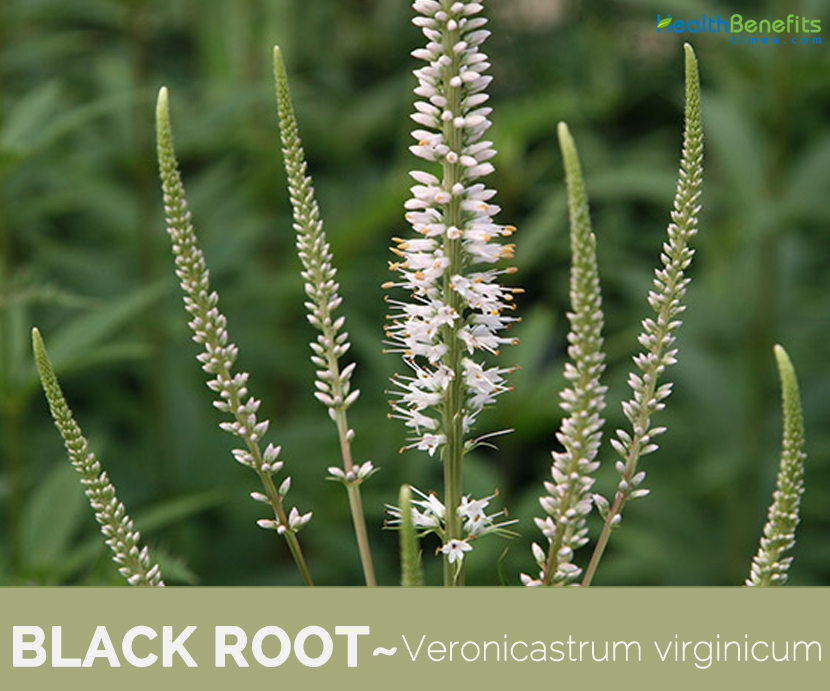 Black Root (Culver’s root) scientifically known as Veronicastrum virginicum is an erect perennial herb belonging to the Scrophulariaceae or the figwort family. The plant is native to the United States from southern Maine to northwest Florida to northern Louisiana up through Minnesota and going over the Canadian border a little bit; good for USDA zones of 3 to 8. Some of the most common names given to it are Culver’s-root, Culverpsyic, Culver’s physic, Bowman’s root, black root, and tall-speedwell, Beaumont’s Root, Brinton Root, Hini, Leptandra, Oxadoddy, Purple Leptandra, Tall Veronica and Whorlywort. Genus name comes from the genus name Veronica (Christian legend claims Saint Veronica gave her veil to Christ to wipe his forehead while he was carrying the cross to Calvary) and astrum meaning star or incomplete resemblance. The common name “Culver’s root” comes from Dr. Culver, an eighteenth-century physician who promoted the use of this plant as medicine at that time.

Black Root is an erect perennial herb that grows about 5-6 ft. tall (120-150 cm) and 2 ft. wide (60 cm). The plant is found growing in moist tall grass prairie and prairie remnants, moist woods, woodland borders, thickets, fields and meadows, stream banks, terraces, roadsides, road allowances, and railway right-of-ways. Growth is best in rich loamy soil, although some sand or clay is also tolerated. The rhizome is horizontal, cylindrical, branched and dark red to dark purple-brown on the outside. The simple, erect stems grow in intervals of 1.2 to 3.2 cm from the rhizome. They are smooth and finely downy.

Leaves are in whorls of 3 to 7 with the whorls widely spaced on the stem. They are dark green, oblong to ovate with fine teeth on the margins and taper to a short stalk. The veins are prominent with a mid-rib and curving lateral veins; the top side is usually hairless, the underside is much paler in color and can have fine hair especially on the ribs.

The inflorescence is a dense spike atop the stem. All but the most immature plants will have several smaller flower spikes rising from the stem below the central spike, which is the first to develop. Flowers are small, 4-parted, about 1/4 to 1/3 inch long, tubular shaped with a white corolla whose lips spread slightly. The lips are much shorter than the corolla tube, with the upper lip having one lobe and the lower lip with 3 lobes. From the tube protrude two stamens that have white filaments and deep yellow to brown anthers. Also protruding is a single white style. The calyx is green, short with pointed lobes (sepals). The flowers bloom from the bottom of the spike up. Several spikes surround the main spike at the top of the plant. Flowering normally takes place from Jul to August

Florets mature into oblong-ovate, flattened, many seeded capsules. Fertile flowers produce a seed capsule that is longer than the calyx. The small, dry, brown, ellipsoid shaped seeds are not easily detached from the capsule as it does not split open very far at the top, and thus end up on the ground still inside the capsule. Seeds can germinate without a waiting period in warm and moist conditions. They are very small and need light for germination. If stored, storage should be in cold dry conditions.

The first documented use of Culver’s root was when Puritan leader Cotton Mather requested it as a remedy for his daughter’s tuberculosis in 1716. Culver’s root was used by early physicians as a powerful laxative and emetic. Native American tribes also used the plant and drank tea preparations to induce vomiting and to help cleanse the blood. Herbalists have used Culver’s root for its ability to increase the flow of bile from the liver. Today it is found used throughout the world due to its health promoting benefits.

Herbal formulations prepared with black root are taken in forms of decoction as well as tincture.