Trending
You are at:Home»Herbs and Spices»Health Benefits of Bog Labrador Tea 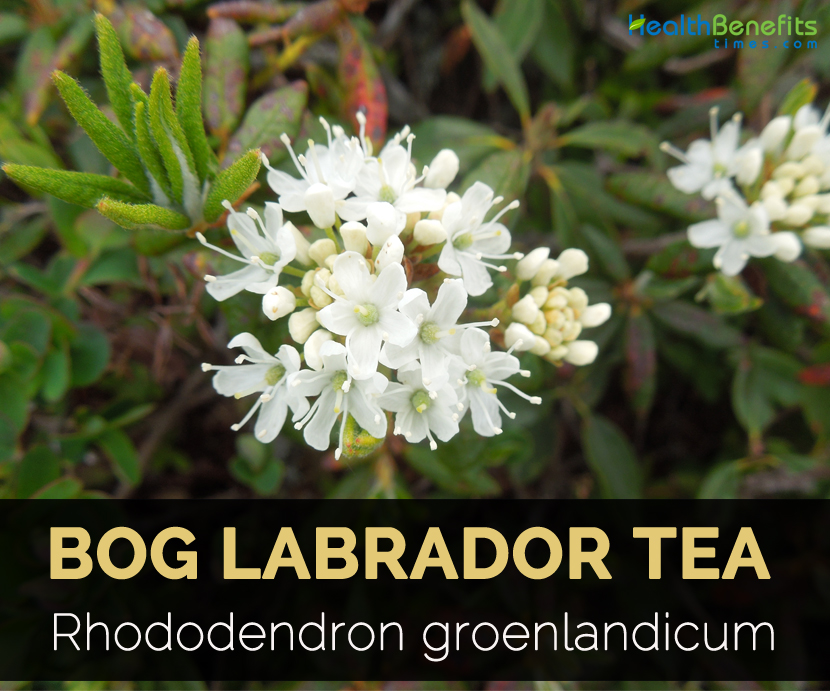 An evergreen shrub common to North America and is found as far south as Wisconsin and Pennsylvania. They are low ornamental plants from 1–6 ft. high, having narrow, dark leaves lined underneath with rust-coloured wooly hairs and bearing white, bell-shaped flowers in the early spring. During the American Revolution the leaves are said to have been used as a substitute for commercial tea.

It is an erect and aromatic shrub which grows to the height of 1 meter with twigs densely covered with long and soft hairs. Leaves are narrow, leathery, about 2-5 cm long, evergreen and alternate. Leaves are dark green above with edges which curl under along the margins. White flowers in tight clusters bloom from May to July. Each flower has small five toothed sepal tube with five separate petals and 5-7 stamens. Fruit is a small and fuzzy capsule tipped with persistent style.

Flowers are five parted. Corolla has five white or creamy white petals, slightly broader, ovate, joined together only near their bases. Corolla is dense with uni-cellular hairs. Usually there are 8 stamens with white filaments and very pale yellow anthers and single style with a blunt tip. Calyx is small with five short lobes and all densely hairy. Flowers are considered fragrant and open after new leaves form. 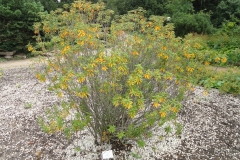 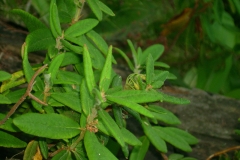 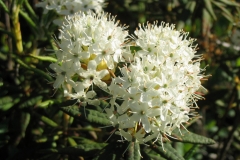 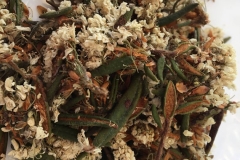 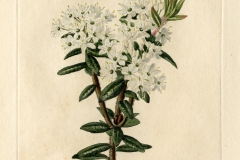 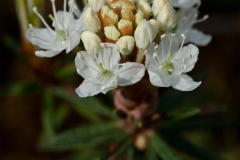 Fertilized flowers form a longer than wide seed capsule which is elongated on both ends and contains 50 small seeds. Capsule is on recurved stalk and when the capsule is dry it splits upward from the bottom and releases seeds to the wind. Flowers self-fertilize.

Labrador tea is used for treating kidney disorders and detoxifies body as it has mild diuretic properties and flush system when overloaded with toxins. It helps to slow down growth of kidney stones and lowers inflammation in that organ.

Labrador tea is useful for indigestion and upset stomachs. When consumed in excess can cause upset stomach. This tea has active ingredients such as sesquiterpenes and tannins which provides calming effect on bloating, cramping, constipation and diarrhea.

The diluted or weak form of tea is recommended for drinking. The strong pot of this tea is beneficial for skin health. The antioxidant and astringent properties is present in this tea so when applied topically, it is effective for psoriasis, eczema, irritation, leprosy and inflammation.

Bog Labrador Tea has moderate amounts of Vitamin C which stimulates immune system and ensures that body has adequate white blood cells for protecting the body. Vitamin C is an antioxidant which eliminates free radicals that causes oxidative stress, chronic disease and inflammation.

Research is conducted to find out the effectiveness of Labrador tea on cancerous cells. Research has found antioxidant composition of this tea with anti-mutagenic and anti-carcinogenic effects which makes it excellent preventative measure when consumed in adequate amounts.

It is disclosed from Greenland and from every province and territory in Canada and in the northeastern and northwestern United States (New York, New England, Michigan, Pennsylvania, Idaho, Minnesota, Wisconsin, Alaska, Oregon and Washington). It grows in bogs, open tundra, musklegs and occasionally on wet shores and rocky alpine slopes.

Very useful in coughs, colds, bronchial and pulmonary affections. Sometimes used as a table tea. For internal use the infusion of 1 teaspoonful of dried leaves to 1 cup of boiling water in wineglassful doses as needed for the control of the above mentioned.

A strong decoction has been recommended for external use as a remedy for itching and exanthematous (eruptions accompanied by fever) skin diseases.

The common Russian name is Bogulnik but literature gives it another, Herba Ledu, which is very close to Canadian Ledum palustra, or Ledum marshland. Bogulnik sometimes covers miles of marshland in European Russia, Siberia and the Far East, making it impossible for other plants to invade this strong shrub abode.

The young leaves and twigs are collected in August and September. Care must be observed when drying as one of the various volatile ether oils it contains is 7½ per cent Ledum; the strong aroma from which could seriously affect the heart if one is in too close confinement during this plant drying stage.

Medical literature gives full credit to Folk Medicine though it is not fully experimented clinically. Leaves and twigs are officially collected for state institutes and sold to pharmacies and dispensaries.

Accommodates Coughs, Bronchitis, Bronchial asthma, Tubercular lungs, Stomach sickness, Headache, Kidney and weak Bladder, Rickets, Diarrhoea, Rheumatism (internally, and as a liniment or ointment), Pains in the chest, Scrofula, Scaby dandruff (blanketed on the scalp, or in patches). Additional: fertility, infections, tightness of breath. Can cure Bronchitis in two weeks. Recommended as a tea decoction of 1 oz. tea to 2 pints boiling water; drink as required, a mouthful at a time.

How to make Labrador tea