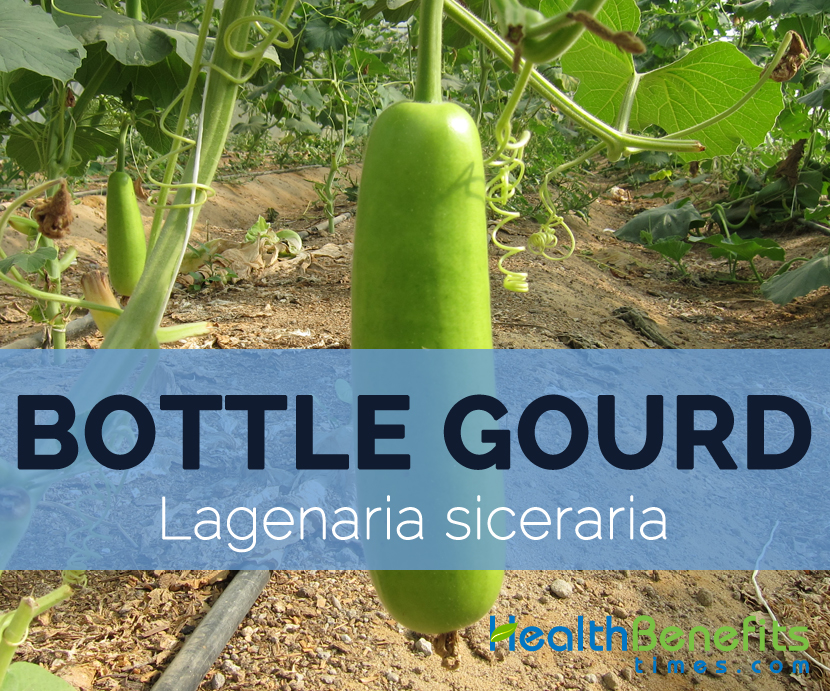 Bottle gourd, Lagenaria siceraria, is a genus of tropical and subtropical vines in the Cucurbitaceae family. It is also called Calabash Gourd, Trumpet Gourd and Long Squash. The immature fruit of these species are consumed as vegetables. It is pear shaped with light green coloration. The immature fruit has white spongy flesh. The Bottle gourd may grow as 1 meter in length. Native to Tropical Africa, it is widely grown for the foods. The bottle gourd requires warm climate and well-drained soil to grow. The two varieties of Bottle gourd are: Pusa Summer Prolific Long and Arka Bahar.

Rounder varieties are called calabash gourds, which can grow in a variety of shapes: huge and rounded, small and bottle shaped, or slim and serpentine. L. siceraria is an important member of the Cucurbitaceae family. It is a warm- season fruit or vegetable and is cultivated throughout Pakistan and India. L. siceraria is an excellent fruit in nature, consisting of all the essential constituents that are necessary for the normal and good health of human beings. There are two varieties of this vegetable, namely sweet variety and bitter variety. Both varieties belong to the Lagenaria genus. Generally, the sweet variety is used for vegetable purposes, while the wild bitter variety is preferably used in medicines.

Nowadays, bottle gourds are grown by direct sowing of seeds or transplanting 15- to 20-day-old seedlings. The plant prefers well-drained, moist, rich soil. It requires plenty of moisture in the growing season and a warm sunny position sheltered from the wind. In rural areas, many houses with thatched roofs are found covered with the gourd vines. Bottle gourds grow very rapidly and their stems can reach a length of 9 m in the summer, so they need a solid support to climb via pole or trellis. The plant produces white ﬂowers. The male ﬂowers have long peduncles and the females have short peduncles with an ovary that is the shape of the fruit. Female ﬂowers have a thick style with three bilobed stigmata.

Bottle gourds were the plants which were used by humans as long as 8,000 to 10,000 years ago in the form of musical instruments, containers and fishing floats. Firstly, it was cultivated in Africa, then Asia and finally reached to America.

The Bottle gourd plant is an annual, vigorous, monoecious, climbing herb often cultivated in warm climates. It grows as a vine with alternate, broad, deep green leaves that are 400 mm long and 400 mm broad. The stem is often thick, angular, ribbed, brittle and hairy which is about 5 m long. The plant yields flower during summer which is monoecious, white, obovate; 15 cm across and 10–15 mm long. The pear shaped smooth light green fruit has white and spongy flesh. The fruit is 1 meter long. It contains brownish seeds which are oblong, and 2 cm long.

The serving size of 116 grams contains 16 calories and provides 13% of Vitamin C and 7.36% of zinc. The same amount of Bottle gourd provides 174 mg of Potassium, 13 mg of Magnesium, 15 mg of Phosphorus and 2 mg of Sodium. Bottle gourd possess various amounts of nutrients, minerals, vitamins, lipids and amino acids.

The roots contain cucurbitacins B, D, and E and the triterpene bryonolic acid.

It is a well-established fact that reactive oxygen species (ROS) are implicated in more than 100 diseases, such as heart disease, stroke, arteriosclerosis, malaria, acquired immunodeﬁciency syndrome (AIDS), diabetes, and can cer. It is, therefore, important for researchers to seek natural sources of antioxidant. Such effects are generally credited to antioxidant components including plant phenolics such as phenylpropanoids and ﬂavonoids Gallic acid was used as a reference antioxidant compound. The samples showed appreciably high DPPH radical scavenging effect at all concentrations. However, the ethyl acetate extract of fresh fruits was more active than the rest of the samples. The ethanol extract of fruits of L. siceraria was also evaluated for antioxidant activity. The results obtained in this study also indicated that the fruits are a potential source of natural antioxidants.

The antihyperglycemic activity of methanol extract of L. siceraria was evaluated in hyperglycemic rats. Extract was given at doses of 200 and 400 mg/kg per os (p.o.) to streptozotocin induced hyperglycemic rats for a period of 14 days. Fasting blood glucose (FBG) was measured on days 0, 4, 8, and 15 after treatment. There occurred signiﬁcant reduction (P < 0.001) in FBG levels; other biochemical tests (SGPT, SGOT, ALP, total cholesterol, triglycerides), antioxidant assay (lipid peroxide, catalase, and glutathione), and histological study of the liver, the liver, kidney, and pancreas tissue, supported the conclusion. The research showed the potent antihyperglycemic activity of L. siceraria, which is probably attributable to its rich ﬂavonoid content.

The anti-asthmatic and anti-allergic activity of the aqueous extract of leaf of L. siceraria (LSA) was evaluated in different animal models. The histamine and acetylcholine induced bronchoconstriction model in guinea pigs, the compound 48/80 induced mast cell degranulation model in rats, and the paw edema model in mice were used. The results of the study revealed a signiﬁcant bronchodilator activity by LSA at doses of 150 and 300 mg/kg. Anti inﬂammatory activity was observed at doses of 50, 75, and 100 mg/kg (intraperitoneal injection) against compound 48/80 induced paw edema in rats. These results support the traditional claim of the drug as a treatment for asthmatic disorders. It was also reported that the triter pene bryonolic acid, an anti-allergic compound, was isolated from callus culture of the roots of L. siceraria.

The immunomodulatory effects of n-butanol soluble and ethyl acetate soluble fraction of the successive methanol extract of L. siceraria have been evaluated. The fractions were administered through the oral route at doses of 100, 200, and 500 mg/kg. There was a signiﬁcant inhibition in the delayed type hypersensitivity reaction in rats. The method of Doherty was used to induce delayed type hypersensitivity response in rats. A dose-dependent increase in both primary and secondary antibody titer was observed. Fractions also signiﬁcantly increased both white blood cell and lymphocyte count.

Hydroalcoholic and aqueous extracts of the leaves of L. siceraria were evaluated for anthelmintic activity against Hymenolepis nana (tapeworm) and Pheretima posthuma (earthworm) by using the method of Mali. In Ethiopian traditional medicine, L. siceraria is widely used for the treatment of skin disorders. Goji et al. evaluated the antimicrobial activity of methanolic extracts of the leaves, seeds, and fruit ﬂesh of L. siceraria using the agar-well diffusion method. Results revealed the extract to show activity against Pseudomonas aeruginosa and Streptococcus pyogenes, but not against clinical isolates of Staphylococcus aureus and Escherichia coli. Thus L. siceraria can be used to treat various skin disorders. The extracts also exhibited moderate antifungal action against Aspergillus niger and Candida albicans. The standard drugs used for comparison were ciproﬂoxacin for bacterial strains and griseofulvin for fungal strains.

Like other members of the Cucurbitaceae family, gourds contain cucurbitacins that are known to be cytotoxic at a high concentration. The tetracyclic triterpenoid cucurbitacins present in fruits and vegetables of the cucumber family are responsible for the bitter taste, and could cause ulcers in the stomach. In extreme cases, people have died from drinking the juice of gourds. The toxic cases are usually due to the gourd being used to make juice, which the drinkers attested to being unusually bitter. Moreover, the victims in the three lethal cases were all diabetics in their 50 s and 60 s. However, the plant is not normally toxic when eaten and is safe to consume. The excessively bitter (and toxic) gourds are due to improper storage (temperature swings or high temperature) and over-ripening.