Trending
You are at:Home»Herbs and Spices»Know about the Brazilian Pepper Tree 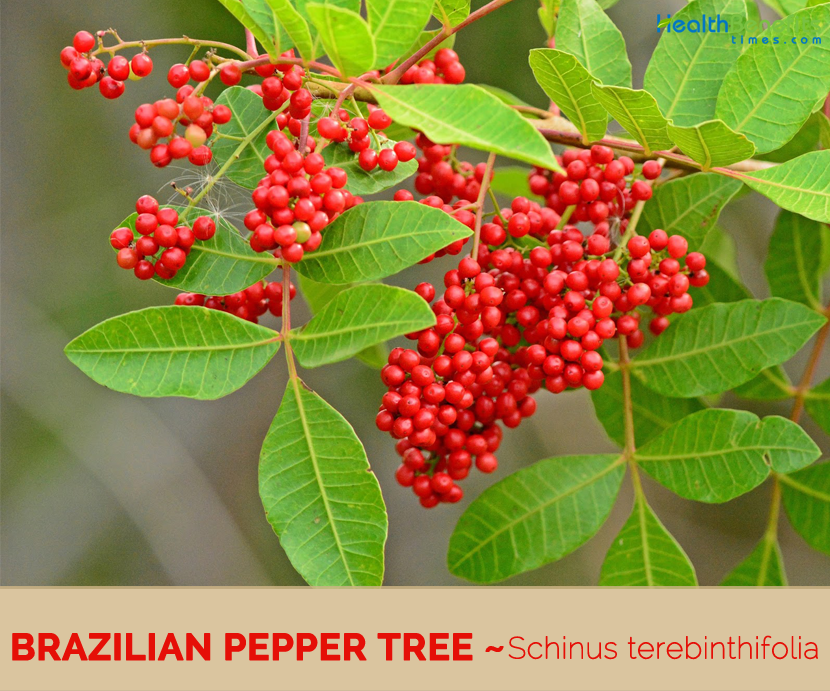 As a member of the Schinus genus it is known as a “pepper tree,” although it is not a true pepper. Even so, Schinus molle or the Peruvian Pepper, a close relative of the Brazilian Pepper, is the source of the pink peppercorns that you sometimes see in gourmet pepper mills. Brazilian Pepper is also known as “Hawaiian Christmas Berry” or “Florida Holly” because its red berries mature in December/ January and are sometimes used as Christmas decorations. Genus name comes from the Greek name schinos for the mastic tree which this genus resembles in that the trees exude a mastic-like juice. Specific epithet means pertaining to turpentine and foliage. Supposedly, for the aromatic foliage.

Brazilian pepper tree is an evergreen shrub or small tree that grows about 3-10 m tall (occasionally 15 m) with a trunk 10-30 cm diameter (occasionally 60 cm). Bark is gray, smooth or becoming furrowed into long narrow flat ridges. Twigs are light brown, finely hairy when young, with many raised dots (lenticels). Sap is aromatic, resinous, suggesting turpentine, turning blackish upon exposure. It is previously planted as a garden ornamental, but now as a weed in coastal areas. The tree is quite resinous and aromatic, particularly when the leaves are crushed. The younger branches are covered with small whitish colored spots (i.e. lenticels) and its new stems are softly hairy (i.e. pubescent) or sparsely hairy (i.e. puberulent). Bark of older stems is dark brown or blackish in color, very rough and deeply ridged.

Leaves are alternate pinnate 7.5–15 cm long, with narrowly winged green finely hairy axis of 2.5–7.5 cm and mostly 5, 7, or 9 (3–13 or more in varieties) stalk less leaflets paired except at end. Leaflets are glabrous, elliptical or oblong, 2.5–5 cm long and 1.3–2 cm wide, the largest at the end of the leaf to 7.5 cm by 2.5 cm, short-pointed at both ends, often with inconspicuous small blunt teeth toward apex, slightly thickened, hairless or nearly so, upper surface shiny green with several straight side veins, and lower surface dull light green. The leaves are highly aromatic when crushed, giving off a peppery or turpentine-like smell.

Flower about 3 mm long and broad consists of calyx of five tiny pointed green sepals; corolla of five spreading white petals less than 3 mm long; 10 stamens attached at base of large ring-shaped disk; and pistil with rounded ovary, short style, and dot stigma. Flowering occurs from September through November and fruits are usually mature by December.

The fruits are drupes many in dense clusters, glossy, with calyx at base, with aromatic resinous brown pulp, slightly bitter, 4-5 mm in diameter. The fruit is green and juicy at first, becoming bright red on ripening, and 6 mm wide. The red skin dries to become a papery shell surrounding the seed. The seed is single, elliptical, light brown, less than 3 mm long.