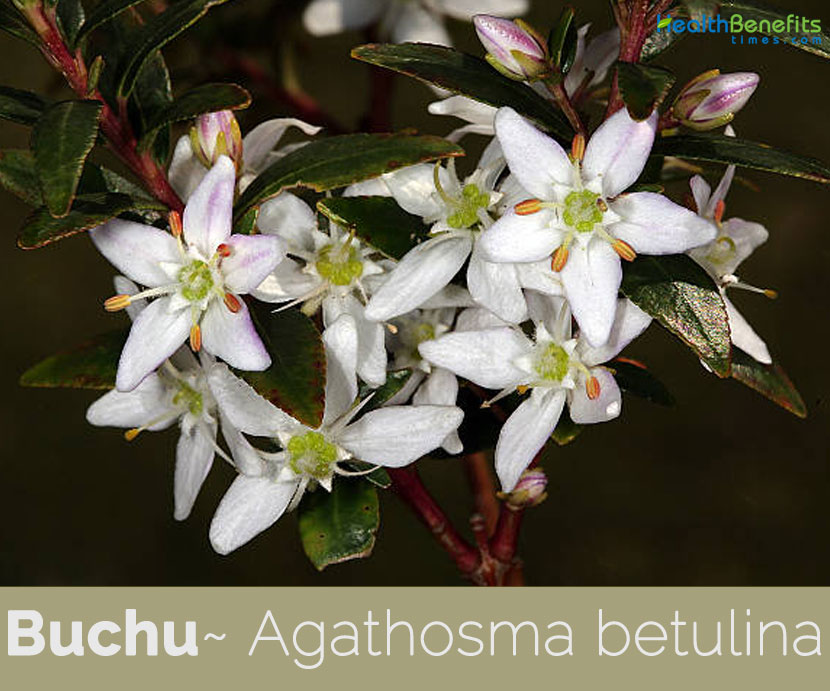 A traditional South African remedy Buchu is a flowering plant belonging to Rutaceae family and an indigenous species of Western Cape Province, South Africa where it is widely cultivated on hillsides. It is also grown in parts of South America. It is considered a traditional medicinal plant in Western Cape province of South Africa and essential oil is derived from the leaves is distributed in large volumes. The herb was first exported to Britain in 1790 and became an official medicine in 1821, being listed in the British Pharmacopoeia as an effective remedy for “cystitis, urethritis, nephritis and catarrh of the bladder.” Bookoo, buku, diosma, bucku, round buchu and bucco are some of the well-known common names of the plant.

The word “Buchu” is originated from the Khoi-San people of southern Africa, and was a word used in reference to any plant that could be dried or powdered. Currently, the name Buchu refers to the abovementioned Agathosma species. Previously known as Barosma betulia, the name originates from the word Barosma (Greek) which means “heavy smell” and the word betulina (Latin) which means “birch-like”, a word used in reference to the serrated birch-like appearance of the leaves.

Buchu is an evergreen, multi-stemmed, aromatic, perennial re-sprouting woody shrub that normally grows about 2 m (6 ft. 7 in) tall. The plant is particularly adapted to dry conditions and can be found on sunny hillsides, on damp lower and middle slopes as well as valley. The herb is grown from cuttings in late summer and requires a lime-free, moisture-retentive but well-drained soil in a sunny position. Some plant species are well adapted to grow at either more acidic or more alkaline pH ranges. Branches are many, stiff and angular with smooth, red-brown to violet-brown barks. Twigs are covered with immersed oil-glands.

Buchu plant is taken as a stimulant, a diuretic, and to relieve digestive complaints. In Western herbal medicine, it is appreciated as a urinary antiseptic and diuretic, and is used specifically to treat cystitis and other infections of the urinary tract. Buchu has a strongly distinctive aroma and taste, reminiscent of black currant, but is described by some as a mixture between rosemary and peppermint. It is grown commercially and used to enhance the blackcurrant flavor of cassis. The essential oil is not only used for medicinal purposes, but also as a flavor fixative in the food industry. The high commercial value of the product has led to the domestication and commercial cultivation of the species.

Leaves are alternate to opposite, 14-25 mm long and 6- 14 mm wide, broadly elliptic to nearly round (average length: breadth ratio 1.95), with rounded and recurved apex; glabrous with prominent main and subsidiary veins on abaxial surface; gland dotted on underside; margin serrate with an oil gland at the base of each serration. Leaves have a strongly aromatic taste and a peppermint-like odor. The leaves are harvested when the plant is flowering or fruiting in summer. They are covered in oil glands that give them an oily, wet appearance.

Before the start of modern medicine, Buchu was considered a trusted medicinal plant used by the San and Khoisan to efficiently manage numerous conditions. Once they are also named “a cure for all ills”, with its most common uses in stomach ailments, bladder infections, general injuries, digestive health and skin conditions.

During 1700’s the Khoisan presented Buchu to the European settlers, who in-turn presented the plant to Europe during late 1700’s. Uses of Buchu spread around the globe and proof of its popularity was found in the cargo manifest of the Titanic that carried nearly eight bales of Buchu when the ship went down.  In more recent times Buchu was used throughout the Crimean and First World Wars as an antiseptic to clean battlefield wounds. 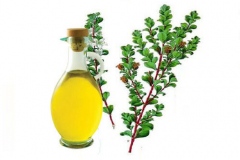 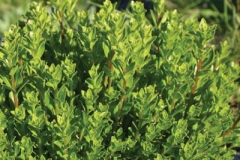 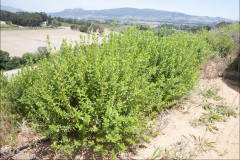 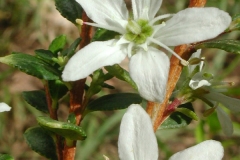 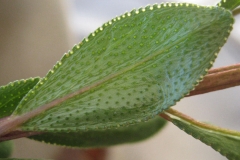 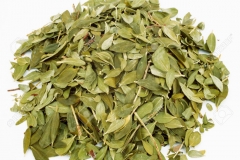 Dried leaves from the Buchu plant 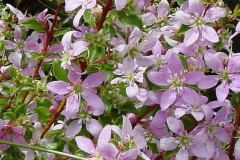 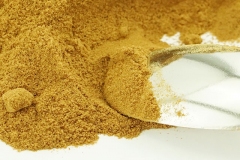 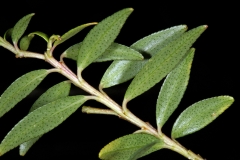 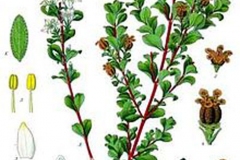 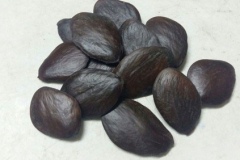 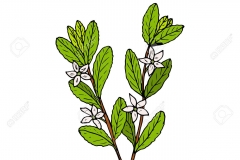 Dried leaves from the Buchu plant

Actual use of Buchu by the peoples of southern Africa is still unclear since Buchu is a general term for aromatic plants. It seems to have been applied topically, maybe as an insect repellent, and also used internally for stomach problems, rheumatism and bladder problems. Listed below are some of the well-known benefits of using Buchu herb

Broadly speaking, buchu is used today in Western herbal medicine for the same type of urinary complaints as in the 19th century. It is commonly prescribed for urinary tract infections, often proving effective in curing acute cystitis when combined with other herbs such as corn silk and juniper.

Taken regularly, it can help to prevent recurrent attacks of chronic cystitis or urethritis. It is also taken for prostatitis and irritable bladder, often in combination with herbs such as uva-ursi and corn silk. The key active constituent, diosphenol, has a diuretic action and may partly account for the herb’s antiseptic effect on the urinary system. (+)

Buchu relieves the symptoms of water retention and acts as a detoxifying agent that releases built up toxins in the body that could result from water retention.

Buchu helps to dissolve and flush out uric acid crystals from the body, which make it effective in conditions such as gout, which is caused by a build-up of uric acid in the body. Similarly, it is essential to keep the body hydrated by drinking plenty of water if you are using Buchu to naturally treat this condition. (+)

Buchu is quite helpful in increasing the flow of water through the kidneys which helps to detox these important organs. Similarly its anti-inflammatory effects also aid the flow of water whilst the antiseptic qualities of Buchu help to disinfect the kidneys to prevent infection. These benefits are passed onto the bladder and the urinary tract for complete urinary health. (+) (+)

Buchu leaves is considered as a good source of bio-flavonoid known as rutin. Rutin has long been used to help smooth circulation, it can also help to strengthen and increase flexibility in blood vessels such as arteries and capillaries. Strengthened blood vessels can improve overall health, whilst helping to ease other related disorders like spider veins, varicose veins and also bruising easily. (+)

Arthritis and other rheumatic diseases are a family of disorders that causes inflammation in the joints and pain in the neighboring structures. Arthritis is a severe auto-immune disease or joint disorder which includes one or more of the bone joints being inflamed. (+) Quercetin, a naturally occurring antioxidant in Buchu, has confirmed to be highly efficacious in helping the relief of arthritis pain as it has verified notable anti-inflammatory properties. (+)

Buchu infusion or tincture is useful in treatments for cystitis and urethritis, especially when they are related to a pre-existing Candida problem, such as yeast infections. The infusion is usually preferable to the tincture, particularly when the onset of infection is sudden. The infusion is also used as a douche for leucorrhea (white vaginal discharge) and occasionally for yeast infections. The herb is a uterine stimulant and contains pulegone, which is also present in large quantities in pennyroyal. Pulegone is an abortifacient and a powerful emmenogogue (stimulates menstrual flow). (+)

Eczema is one of the recurring, non-infectious, inflammatory skin condition described by itchy, dry, inflamed, flaky and reddened skin. Wide scientific research has confirmed that formulated organic Buchu oil, which has potent anti-inflammatory, anti-fungal and antibacterial properties, assists in the effective management of eczema in addition to bringing immediate relief to the inflammation and itchiness symptomatic of eczema. (+)

Buchu is a natural anti-inflammatory and antiseptic herb beneficial for treating UTI’s. Diosphenol, found on the leaves are responsible for the diuretic and antiseptic qualities of the herb. This makes it particularly effective for inflammation of the urinary tract, working to get rid of conditions including urethritis, cystitis as well as irritation of the bladder. Apart from that Buchu also softens inflamed mucous membranes in the urinary tract, which helps to avoid the vicious circle of “cystitis – antibiotics – cystitis” that frequently disturbs sufferers of this debilitating condition. The diuretic properties of Buchu also assist in flushing out harmful toxins from the body. (+)

Due to its anti-spasmodic properties buchu help to relieve nausea, indigestion and flatulence. It has a cleansing effect on the digestive tract which can prevent harmful bacteria from outnumbering the good bacteria. It is suggested that Buchu Leaf is used cautiously to promote digestive health as its strong disinfectant properties can also eradicate the good bacteria (probiotics) that are essential for complete gut health. (van Wyk and Wink, 2003). (+)

Common cold, including chest and head cold, and seasonal flu are caused by viruses. While flu symptoms are comparable to that of cold symptoms, they include fever, headache and muscle soreness. Supplementing with a natural anti-inflammatory such as Buchu, can assist in the prevention of inflammation which is responsible for worsening the degree of one’s illness significantly. Buchu is also a source of Vitamin A, a perfect vitamin in the protector against viral infections such as cold and flu. (+)(+)

Traditional uses and benefits of Buchu