Trending
You are at:Home»Herbs and Spices»Know about the Burning Bush 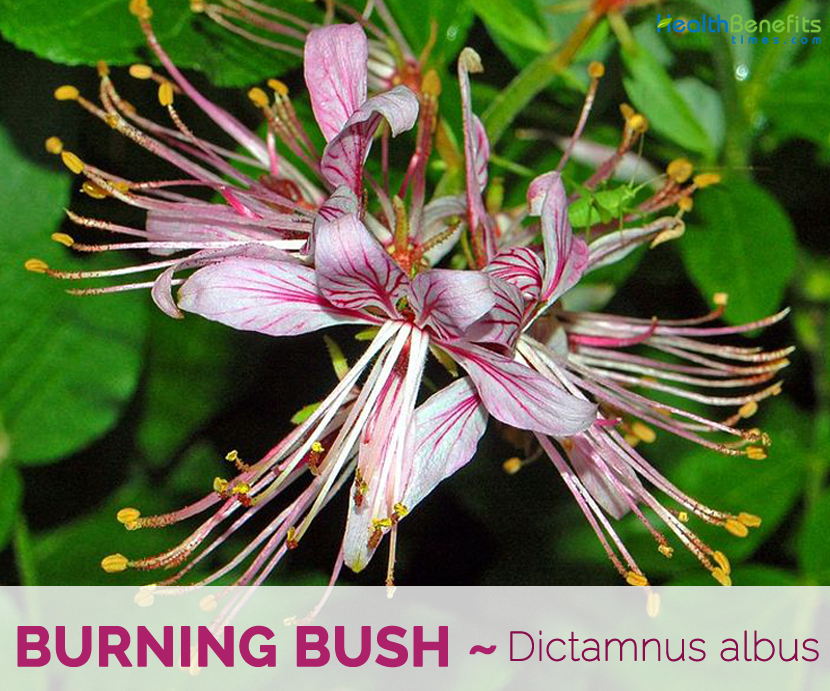 Dictamnus is a genus of flowering plant in the family Rutaceae, with a single species, Dictamnus albus, which has several geographical variants. It is known variously as Burning bush, Pink Burning Bush, false dittany, white dittany, gas plant and Fraxinella. It is an herbaceous perennial, native to warm, open woodland habitats in southern Europe, North Africa and much of Asia and is grown as an ornamental in many places. Genus name comes from the Greek name for a Cretan origanum, probably named after Mount Dikte. Foliage consists of oil that causes allergic reactions (skin rash) in some individuals. In hot weather, old flowers or seed pods discharge a flammable oil which, on a windless summer evening, can be burned with a match resulting in a brief vapor burn which is harmless to the plant, hence the common name.

Elegant, glossy, odd-pinnate, light green leaves are attractive throughout the growing season and release a pleasant lemony fragrance when rubbed or crushed. Foliage also contains oil that causes allergic reactions (skin rash) in some individuals. The leaves turn a brilliant purplish-red to scarlet in the fall.

The flowers are terminal racemes and pink with dark veins. They are large and irregular, with 5 sepals and 5 petals. There are 2 bracteoles that are slightly zygomorphous. The 10 stamens are long, threadlike and bent forward. The ovaries have 5 carpels fused at the base on a short gynophore. Flowers give way to star-shaped seed heads which provide some ornamental interest if left on the plant. Fruit capsule bursts open into mericarps ejecting to expose four red-orange seeds.  In hot weather, old flowers or seed pods emit a flammable oil which, on a windless summer evening, can be ignited with a match resulting in a brief vapor burn which is harmless to the plant, hence the common name.

Dictamnus albus ‘Purpureus’ has purplish-pink flowers with dark veins and stems. As with all forms of gas plant, it is slow to establish.