Trending
You are at:Home»Herbs and Spices»Facts about the Busy Lizzie 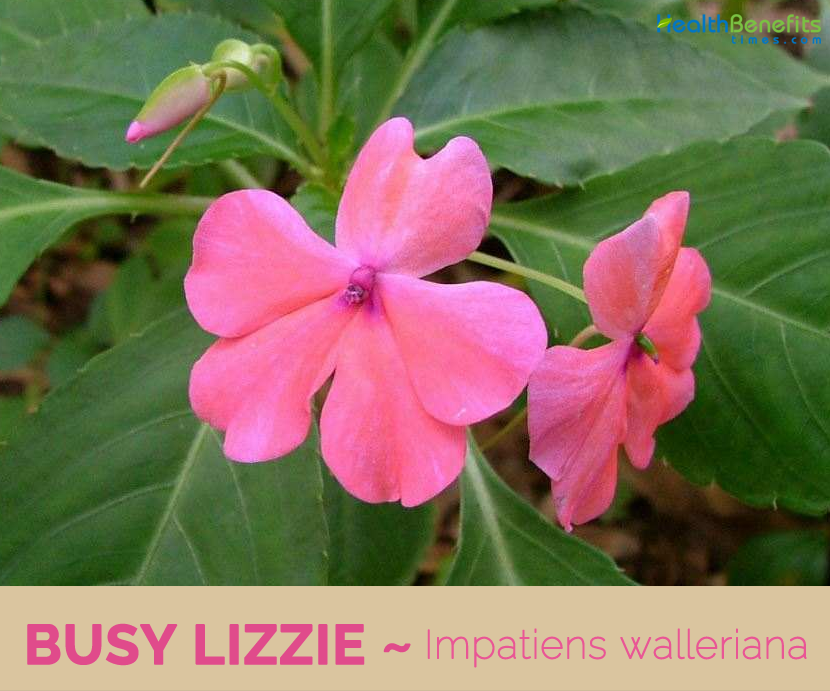 Also called Balsam or ‘Busy Lizzie’, this colorful and hardy succulent plant tolerates heavy shade, and so can grow into forested areas, especially rainforest boundaries and watercourses. Scientifically known as Impatiens walleriana, it is a species of the genus Impatiens and Balsaminaceae (touch-me-nots) family. The species is native to East Africa (i.e. southeastern Kenya, Tanzania, southern Malawi, western Mozambique and eastern Zimbabwe). The species is widely cultivated as an ornamental in many parts of the world and has also become naturalized in many of these areas. Other popular common names of the plant are Busy Lizzy, Garden Impatiens, Impatiens, Japanese Balsam, Jewel Weed, Patience Plant, Patient Lucy, Shady Lady, Snapweed, Sultan’s Balsam, Sultan’s Flower, Sultana, Touch Me Not and Zanzibar Balsam. Genus name comes from the Latin word impatiens meaning impatient in reference to the violent seed discharge from the ripe pods.

Busy Lizzie is a flowering perennial or annual herb, simple or branched with succulent, translucent, green or reddish tinged, glabrous stem, slightly thickened and semi-woody at the base. The plant grows about 30–90 cm high and is found growing  in coastal forest areas, riverine thickets, river margins, bush land, waterway margins, damp and shady places, humid places, and in riparian habitats, also cultivated in gardens and greenhouses; It has become a weed of roadsides, disturbed sites and waste areas in populated areas. The plant prefers slightly acid to neutral, moist, well drained good garden loam rich in organic matter such as leaf mold or compost with liberal amounts of coarse sand for good drainage. All parts of the plant (leaves, stems, flowers, roots) are soft and easily damaged.

The leaves are mostly alternately arranged, but the uppermost ones can sometimes be oppositely arranged. They are about 13 cm long and 2.5– 5.5 cm wide, with 5–8 pairs of lateral veins. They are oval (i.e. elliptic) or egg-shaped in outline (i.e. ovate) and borne on stalks (i.e. petioles) 1-4 cm long. The leaf blades are glossy with margins ranging from almost entire to slightly toothed (i.e. crenate or denticulate). They are hairless (i.e. glabrous) with pointed tips (i.e. acuminate apices).

The flowers appear predominantly in pairs or threes at the leaf-stem junction in the top part of the plant.  The flowers come in a wide variety of colors (i.e. pink, red, orange, white, purple, etc.), but pink is most common in naturalized plants. These flowers are usually arranged in small clusters of two or three in the upper leaf forks, with each flower being borne on a stalk (i.e. pedicel) 1-3 cm long. They have five showy petals (10-20 mm long) and three sepals. One of the sepals is relatively large (about 10 mm long) with a characteristic whitish spur (20-32 mm long), while the other two are tiny and easily missed. The uppermost petal is usually slightly larger than the others with a keel on its underside. Flowering occurs throughout the year. The fruit is a smooth greenish capsule 15-20 mm long and 4-6 mm wide and fleshy when young. These fruit are swollen in the middle and have a ribbed surface. Ripe fruits explode with even slight push and eject small brownish seeds.