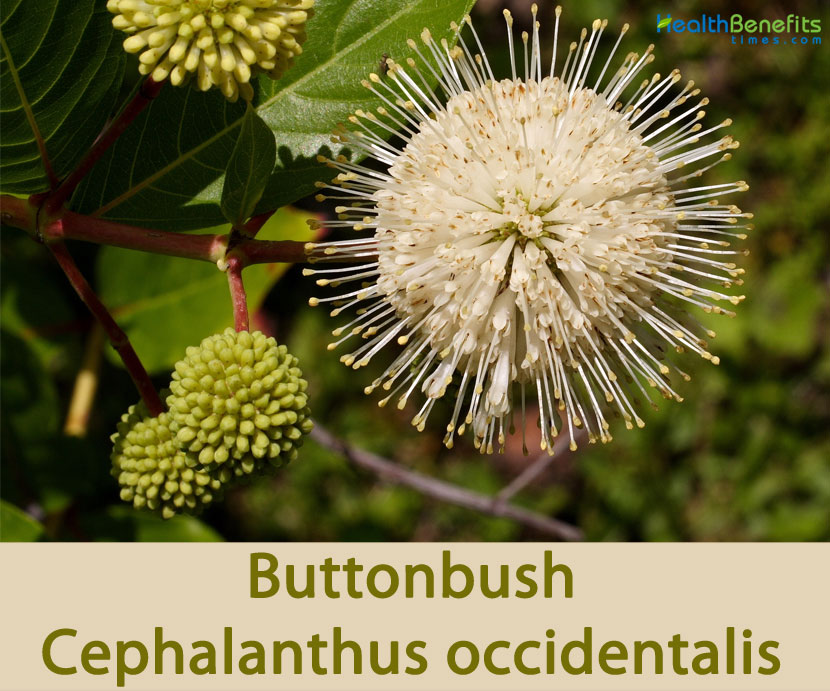 Cephalanthus occidentalis popularly known as Buttonbush is a species of flowering plant in the coffee family, Rubiaceae. The plant is native to Central Valley in California, and to eastern and southern North America. It occurs from Nova Scotia to Ontario, south through Florida, and west to the eastern Great Plains with scattered populations in New Mexico, Arizona, California, and northern Mexico. Common names include Common buttonbush, Button Willow, Honey Bells, Button ball, globe-flower, riverbush, Eastern buttonbush, Pincusion flower and buckbrush. Genus name comes from the Greek words kephale meaning head and anthos meaning flower in reference to the flower heads. Cephalanthus occidentalis is possibly poisonous to livestock as it contains glucosides, including cephalanthine. It is not very appetizing to livestock although native bees are attracted to the showy tubular flowers.

The plant prefers medium to wet moisture levels. It is intolerant of dry soils. It grows well in sandy, loamy or alluvial soils with sand or silt surfaces. It prefers acidic to neutral soils. It is intolerant of alkalinity. It grows more abundantly with increased water and light levels. This plant is easy to grow as long as it’s planted near a stream or water source. It is often used in wetland revegation project in the Central Valley. The root system is branching and woody. Lower stems are up to 4 inches diameter. Main stems are typically multiple from base, often forming colonies from root suckers, and have a rounded but irregular crown. Stem bases are swollen. Branches are usually green when young but turn brown at maturity. Young twigs are green or reddish in color, 4-sided with elongated lenticels, and turn dark reddish-brown to gray-brown and scaly upon maturation. Bark is thin, gray to brown, later with flattened ridges and deep grooves.

Leaves are simple and opposite, occasionally whorled in 3s, egg-shaped to oblong-elliptic, 2½ to 6 inches long, 1 to 2¾ inches wide with a sharply pointed tip, and rounded to tapering at the base. The upper surface is hairless, dark green and shiny, the lower surface paler, sometimes with sparse hairs on major veins. Edges are toothless and may be fringed with minute hairs. The leaf stalk is hairless and up to ¾ inch long. At the base of the stalk is a pair of triangular appendages (stipules) about 1/8 inches long. Lateral buds are embedded in the bark and appear as a swelling or small pimple above a leaf scar. In the typical variety of this species, both the young branches and leaves are hairless, although there exists a less common variety of Buttonbush with pubescent branches and leaves.

Flowers are arranged in a dense spherical flower clusters ¾ to 1 inch in diameter densely packed with 100 to 200 flowers on a short peduncle. Clusters are single at the ends of stalks up to 4 inches long at branch tips and arising from upper leaf axils. Flowers are small white or cream flowers. Each flower has a narrow corolla about 1/3 inches (8 mm.) long, with 4 small spreading lobes at its apex. There are 4 short stamens and a single white style that is quite long and undivided, projecting beyond the corolla. This later characteristic provides the flower head with a starburst appearance. The small green calyx is tubular with 4 small teeth. It is about ¼ inches in length. The blooming period occurs for a long period, from late spring, throughout the summer months, and into early autumn. Flowers are thought to be self-incompatible. The flowers are sweetly fragrant.

Fertile flower heads are replaced by spherical seed heads about ¾ to 1 inch diameter that turn red and eventually dark brown at maturity. Each flower is replaced by a cone-shaped, 2-sectioned nutlet that is narrowly obpyramidal (like a narrow upside-down pyramid). Nutlets are thick-walled and leathery, ¼ to 3/8 inch long. The fruit consists of 2 cells, each cell containing a single seed (occasionally, one of the cells is empty). Seeds are elliptic to cone-shaped, brown with a whitish, fleshy appendage at the tip. Common buttonbush blooms in June through September and sets fruit in September and October. Bonner reported an average of 295,000 seeds/kg. Seeds are high in carbohydrates. Longevity of seeds in storage is unknown but they are thought to be orthodox.

Traditional uses and benefits of Buttonbush