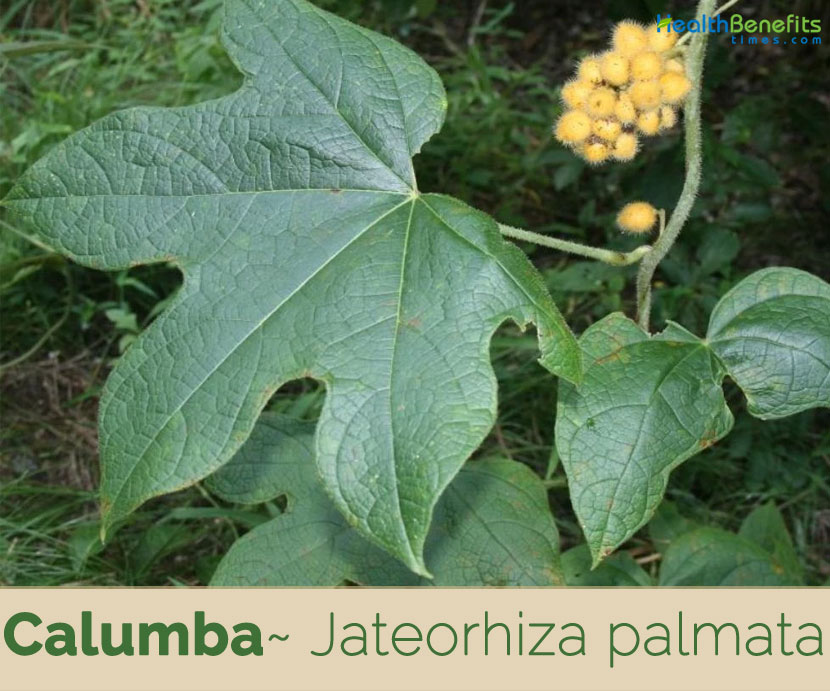 Calumba scientifically known as Jateorhiza palmata is a perennial climbing plant belonging to Menispermaceae (Moonseed family). The plant is native to tropical East Africa particularly Kenya, Tanzania, Malawi, Zimbabwe, Mozambique and South Africa (Kwazulu-Natal). It is cultivated in Mozambique, and cultivated and locally naturalized in many tropical countries, including Ghana, Madagascar, Mauritius, Réunion and also in India and Brazil. It consists of isoquinoline alkaloids and is used mainly as a bitter tonic particularly in cases of anorexia nervosa. It contains no tannins, hence it can be safely used in iron preparations for the treatment of anemia without the fear of precipitation resulted from in vitro interaction. Bitter columba root, Calumbo, Colomba, Colomba root, Colombo, Colombo-root, Foreign colombo, Jateorhiza, Kalamba, Calumba, calumba root, columba, kalumba, kalumb, jateorhiza and guvercin koku otu are some of the popular common names of the plant.

Palmata means lobed like an open hand with outstretched fingers or hand-like. The name of this plant is with Latin and Greek base and suggests “root of medicinal virtues”. It has only two species: Jateorhiza palmate and Jateorhiza calumba all of them are collectively known as Calumba root, Jateorhiza is native of tropical areas of Southern and Eastern Africa including Malawi. Jateorhiza palmata is named after the Latin “palmata” that refers to its palmately lobed leaves. Basal lobes mostly overlap and the male inflorescence is smooth and Jateorhiza Calumba, The main difference from palmata is that the basal lobes of leaves are rounded but do not overlap and the male inflorescence is hispid.

Calumba is a tall, dioecious twining climbing perennial vine that normally grows about 2 – 5 meters long often reaching the tops of trees. The plant is found growing in rain-forest as well as fringing forest. The diameter of calumba root is normally between 3 cm and 8 cm and it has a greenish-black hue. In addition, the root of this herb has a starchy evenness, a hollowed center and a dense bark. Crosswise, the roots have a yellowish color having circulatory bundles arranged in spreading out lines. The annual stems, one or two from each root, are hair with glandular tips and have large bright green membranous leaves.

The leaves appear opposite to each other and their petiole is approximately 18 cm to 25 cm in length. The leaf blades measure anything between 15 cm and 35 cm in length and 18 cm and 40 cm in width. They have bristly hairs on both sides, are generally curved, profoundly heart-shaped (cordate) at the bottom and generally have five wide oval-shaped lobes each.

Calumba is a dioecious plant, representing that each plant has a separate sex. The cluster of flowers (inflorescences) of the male plant of the species are about 40 cm in length and possess green sepals that measure anything between 2.7 mm to 3.2 mm in length and 1.2 mm to 1.6 mm in width. The stamens of the male inflorescences are unbound, but merged at their base with the intricate margins of the petals. On the other hand, the female inflorescence of calumba measures approximately 8 cm to 10 cm in length and possesses a rust-red hued pubertal ovary measuring about 1.0 mm to 1.5 mm. 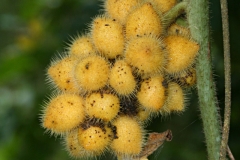 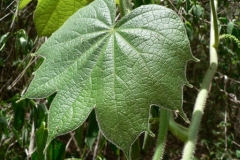 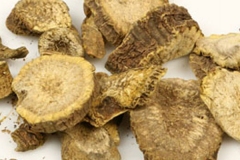 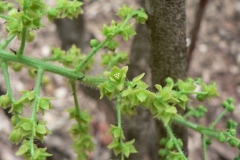 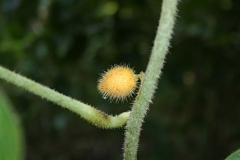 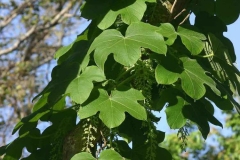 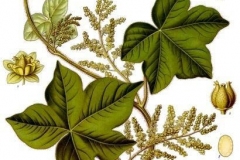 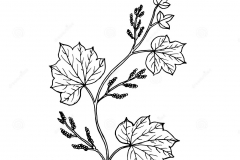 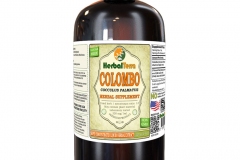 Fertile flowers are followed by globoid drupes enclosing a stone akin to the shape of a moon. It is about 2.0 cm to 2.5 cm in length and approximately 1.5 cm to 2.cm in width.

Traditional uses and benefits of Calumba