Trending
You are at:Home»Foods»Candied Fruit facts and nutrition 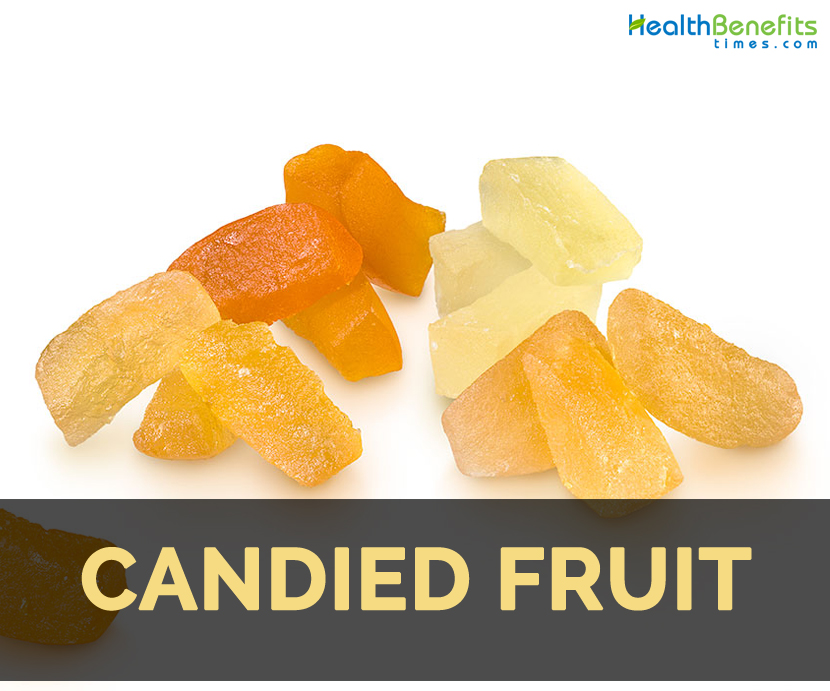 The fruits which are preserved in sugar are known as candied fruits. Candied fruit is also called glace fruit or crystallized fruit that have existed since 14thg century. Fruits are picked before they get ripened fully to get the maximum favor. The traditional process of Candying fruit is blanching fruits to soften and then soaked it in concentrated syrups. The process of drenching fruit in syrup prevents growth of spolage microorganisms due to the creation of unfavorable osmotic pressure. Syrups are heated to accurate temperatures for preventing from caramelizing or crystallizing. This traditional method is used for fragile or perishable fruits and this process requires two months. The rapid and continuous method requires one week on average and is applied for hardier fruit. After the fruits are drained, it is dried.

The fruit is cut into smaller pieces and placed in heated sugar syrup that absorbs moisture within fruit and prevents it. The period of time required for preservation process depends on the size and type of fruit i.e. from several days to several months. The commonly candied fruits include apricots, cherries, dates, apples, ginger root and pineapple. The candied peels are citron and orange. Generally the recipes may vary from region to region but the basic principle of making candied fruit is to boil fruit and steep it in strong sugar solution for weeks and dry of the remaining water. Candied fruits are an ingredient in chocolate confectionery and patisserie. Due to its versatile nature, it is used in sponge cakes, filling cakes and also ice creams. It is found in various forms such as whole, halves, cubes, quarters, cups, strips, pastes, crumble and mixes.

The methods of preserving foods with the use of sugar or honey or palm syrup were known to ancient cultures of Mesopotamia and China. Arabs were the precursors of modern candying who served candied citrus or roses at the valuable moments of their banquets. Candied fruit made its way to West with Arab domination of Southern Europe parts. The first document dates back to 16th century in Europe demonstrates use of candied fruit. It became a vital ingredient in Italy in culinary tradition which includes the Cassata Siciliana, Milanese panettone and the Cannoli.