Trending
You are at:Home»Herbs and Spices»Traditional uses and benefits of Cardinal Flower 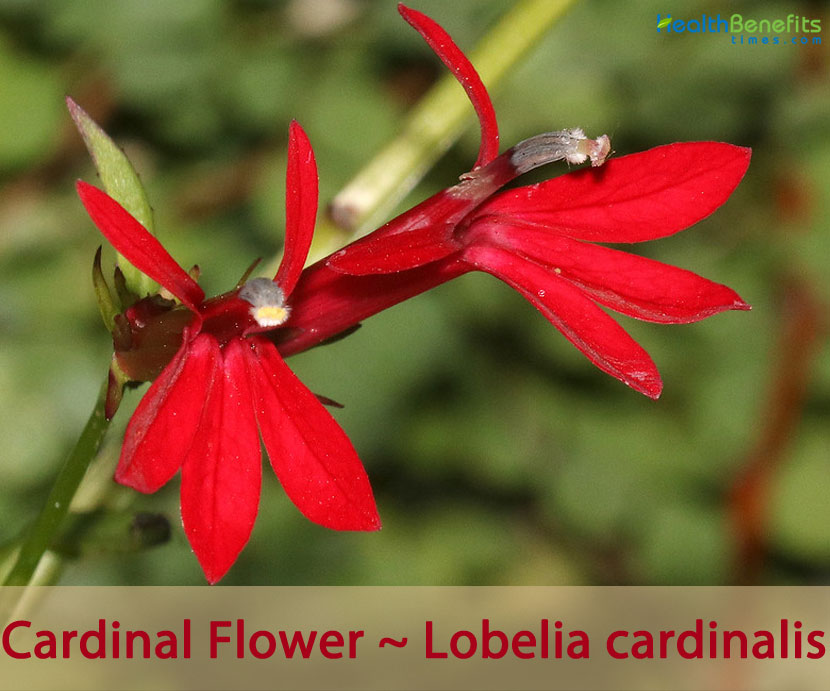 Cardinal flower, botanically known as lobelia cardinalis, is an herbaceous, flowering plant that is a member of the bellflower family (campanulaceae). This species is called the Cardinal Flower, because the bright red flowers are similar in color to the garments worn by cardinals in the Catholic Church. The plant is native to Americas, from southeastern Canada south through the eastern and southwestern United States, Mexico and Central America to northern Colombia. Few of the popular common names of the plant include Cardinal-flower, Cardinal Lobelia, Red Lobelia, Indian Pink, Slinkweed and Scarlet lobelia. The genus name Lobelia honors Matthias de l’Obel (1538-1616), French physician and botanist, who with Pierre Pena wrote Stirpium Adversaria Nova (1570) which detailed a new plant classification system based upon leaves. The species name cardinalis, as well as the nonscientific name (Cardinal Flower) is said to be a reference to the bright red clothing worn by Roman Catholic cardinals.

Cardinal Flower is an erect, tap rooted, clump-forming, herbaceous, aquatic, perennial plant that normally grows about grows 3- to 4-feet tall with a spread of about 2 feet. The plant is found growing in wet ditches, wet prairies, prairie swales, ravines, depressions, woodland edges, stream banks, roadsides, wet meadows, swamps, areas near lakes and ponds, openings in bottomland forests, sandy or gravelly seeps, edges of ponds, creeks or ditches and borders of marshes. The plant grows best in moderately moist to wet, organically rich soils. The plant adapts to loam, sandy loam, or gravelly soil. The soil should consist of some organic matter to retain moisture. The stems are angled, green in color, pubescent or glabrous, and rarely branched.

Lanceolate alternate leaves are up to 20 cm (8 in) long and 5 cm (2 in) wide. They are dark green above and light green below and mostly glabrous. Leaf blades gradually taper toward their bases with very narrow blade tissue continuing to the stem.  Leaf blades also gradually taper toward the tip (acuminate).  Margins are somewhat sinuous and have short, irregularly coarse teeth (serrulate) that are angled toward the leaf tip.   Leaf veins are slightly suppressed above and strongly raised below.  The smooth upper leaf blade surface has a textured appearance due to upward flexing of the surface between veins.  Leaves are positioned somewhat horizontally, but can droop toward the tips.

Inflorescences of cardinal flower occur in late summer as erect, terminal racemes, from one-fourth to one-third the height of the plant.  Racemes have showy brilliant red flowers (rarely white or pink) that may be sparsely spaced or densely packed.  Flowers, on short pedicels, are each subtended by a small linear bract.  Flowers mature successively from the base of the raceme to the top, with flowering extending over a month or two, depending on site moisture.

Flowers are positioned at about 45 degrees off the stem, are about 1½ inches long, with the front of the flower being about ¾ inch wide.  Flower corolla consists of two slender upper lobes (flared and not connected to each other beyond the tube) and three lower broader lobes (connected at the bases beyond the tube and projecting out and slightly downward) together forming a fluted tube in the lower portion.  The front surfaces of the corolla are a vibrant red (rarely white or pink) while the back surfaces, the tube and the filaments are often a lighter red.  Two hazy dark lines can be seen at the juncture of the three lower corolla lobes.  Five stamens have fused filaments that form a tube topped with greyish, down-turned and united anthers.  This stamen tube tightly surrounds the pistil, which has a two-lobed stigma extending slightly from the stamen tube as the flower matures.  A green, bell-like (campanulate) ribbed calyx has a raised rim and five projecting linear lobes.  The corolla attaches immediately inside the calyx rim. The flowers are attractive to a number of butterflies and the Ruby-throated Hummingbird. Flowering normally takes place in between July to September. 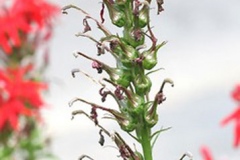 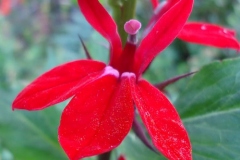 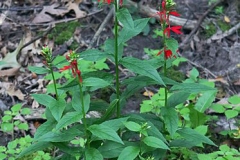 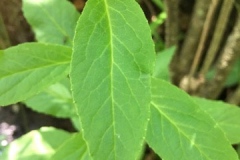 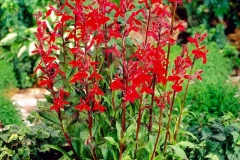 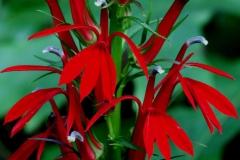 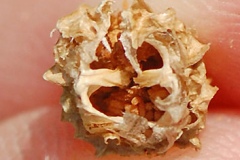 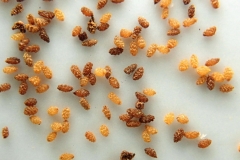 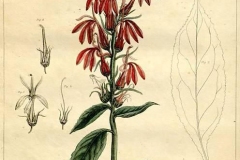 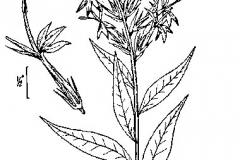 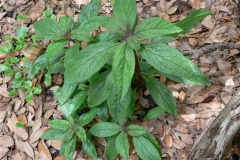 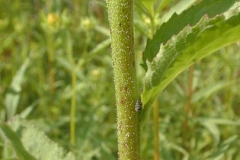 As a flower fades, the calyx enlarges.  The calyx then serves as lower portion of the seed capsule (fruit) while the upper portion is a smooth, rounded or bell shaped and slightly pointed cap that is about 4 inches long.  The fruiting capsule is divided into two sections (locales), within which a dense seed layer develops, such that each capsule contains hundreds of tiny, dust-like seeds.  It is initially green gradually turns tan to red-brown and splits open in the fall. When seed capsules dry, only the top opens to release seeds. Seeds are abundant, minute, brown, and elliptic to linear in shape. Capsules also deteriorate over time and seeds are released for transport by wind and water. Plants can also be grown from seed, cuttings, or division of basal off-shoots.

Though the cardinal flower is native to North America, it’s been cultivated in Europe since the seventeenth century. French explorers came across the flower in Canada in the 1600s, and sent specimens back to France.

Its bright flowers quickly grew popular and European home gardens soon boasted these beautiful plants. A 1629 letter from English botanist John Parkinson describes receiving a packet of seeds from Paris that contained “the rich crimson cardinal flower…it growth near the river in Canada, where the French plantation in America is seated.”

C Herbs and Spices
Share. Twitter Facebook Google+ Pinterest LinkedIn Tumblr Email
Previous ArticleDo Healthy People have a Better Relationship with Others?
Next Article What Are The Health Benefits Of Alcohol And Drug Rehab Treatments