Trending
You are at:Home»Fruits»Facts and benefits of Carob 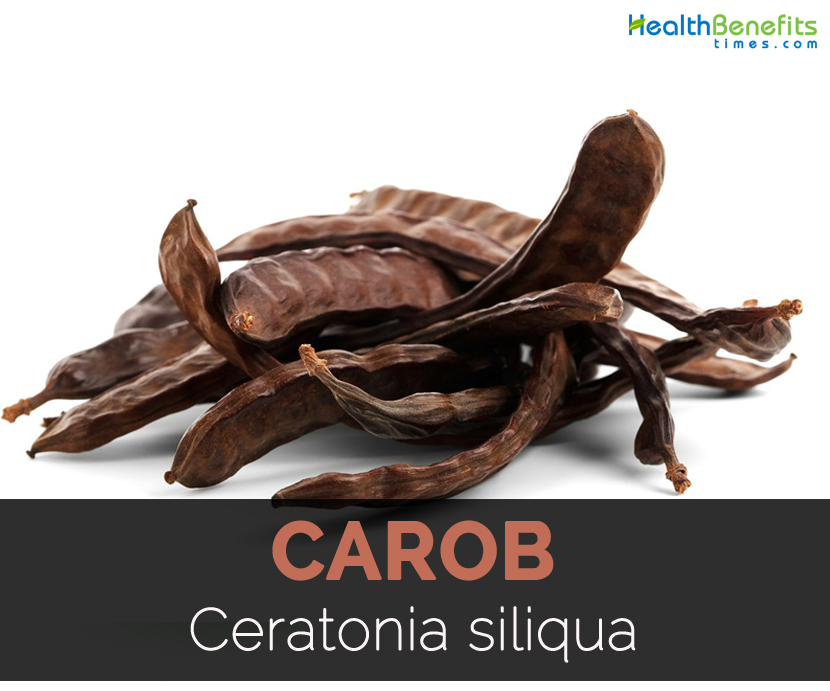 Ceratonia siliqua is also known from these names: Carob, Carob tree, St John’s-bread, Locust bean and Locust tree. Carob is a species of flowering evergreen shrub which belongs to Fabaceae family. Carob tree is inherent to Mediterranean region such as Northern Africa, Southern Europe, larger Mediterranean islands, Northern Africa, Levant and Middle-East of Western Asia to Iran and Canary Islands and Macaronesia. It is cultivated for its edible pods and grown as an ornamental tree in gardens. Carob tree has the ability to tolerate heat and drought and is well adapted to Mediterranean climate. Carob tree is cultivated on marginal lands in Mediterranean basin where few other crops are cultivated economically. Carob is inter-planted with grapes, olives and nuts.

The tree could reach 15 meters high having trunk of 3 feet in circumference. Branches possess evergreen and oval shaped leaves with clusters of red flowers. It turns into seed pods. Unripe pods are soft, fleshy and bright green and have the similar appearance of pea pod. Ripe pods have sweet taste due to high isobutyric acid content which release reminiscent aroma of Limburger cheese. The dried ripe pods have hard seeds which provide rattle effect. Pods are slightly curved, long, thick and dark brown measuring 4 to 10 inches long. Raw carob tastes subtly sweet having pleasant like a taste of caramel. Fresh pods are the nutritious form of carob. Dried pods of Carob are used for making fresh raw carob powder. Carob was the primitive source of sugar till sugarcane was widely available. Presently, it is used as a substitute for chocolate that contains theobromine, an enzyme which is highly toxic to dogs as well as some people.

Fruit is used for both human nutrition as well as animal feed. It is rich in protein, carbohydrates and low level of fat. It also has Calcium, Magnesium, Phosphorus, Iron, Manganese, Potassium, Copper, Barium, Nickel, Copper and Vitamins such as B, A, D, B3 and B2. Carob is free from caffeine, oxalic acid and bromine, tyramine and nylthylamine. Carob has antioxidants in the form of polyphenols. It has a meaningful role on human health. The natural thickening substance obtained from endosperm which is used as confectionery. It is also used in food, cosmetic and pharmaceutical industries. Moreover, Carob is a multipurpose tree which helps to prevent soil erosion.

Carob pods and powder have been used for thousands of years by civilizations which is located in Mediterranean region as well as Adriatic Sea. Carob tree have been used since long time dating back to ancient Egyptian times. Carob sees has gum like qualities which is used as a binding adhesive for mummies when buried in tombs. St. John’s bread was named with the famed story of St. John who is a Baptist monk who enjoyed consuming pods of carob fruit. The term bread was due to the texture of fresh ripe pod which is slightly chewy in nature. It has been used as a liqueur, syrup and ingredient in Mediterranean region. Carob syrup is commonly known as black gold in island of Cyprus. Today Carob is used as a beverage and consumed fresh for ceremonial purposes in Islamic customs and used as traditional food in Jewish community for celebration of special holidays. The old style carob press is found in small villages in Lebanon as well as other parts of worlds. Today Spain, Morocco, Italy, Greece and Portugal are the top carob producing countries. Carob has its way all around the world which includes California as well. Evidence has shown the use of Carob products dating back to ancient Greece and Egypt. It was used as a food source. Seeds of Carob are consistent in size and weight. This species is ancient and have survived last ice age and flourished since Mediterranean region. It is adapted to harsh climates as well as poor soils. The species is cultivated widely throughout its natural range due to its reliability as a resource of food and fuel during the times of drought as well.

Carob trees are dioecious but some might be hermaphrodite and grows to the height of 15 meters. The crow is semi-spherical and broad which is supported by a thick trunk having brown rough bark and sturdy branches. Leaves are alternate, pinnate measuring 10 to 20 centimeters long. The plant bears blossom in autumn. Flowers are small, numerous, arranged spirally along inflorescence axis in catkin like racemes which are borne on spurs from old wood and even on trunk. The flowers are pollinated by both insects and winds. The plant bears pods as a fruit which is compressed, elongated, straight or curved and is thickened at sutures. Each pod possesses eight seeds. It prefers warm temperate and subtropical areas and tolerates hot as well as humid coastal areas. The tree prefers sandy loams, well-drained and cannot tolerate waterlogging.

Carob does not have theobromine or caffeine which is stimulants. Carob helps to promote immune system, improve digestion, lower chances of cancer, prevents cardiovascular diseases, slows down aging and prevents diabetes.

Carob is a medicinal plant which is used in traditional medicine for treating gastro-intestinal disorders. It is analyzed that phytochemical constituents as well as pharmacological activities of Carob on gastro-intestinal tract. The study conducted on leaves and pods of Carob showed high content of carbohydrates, minerals, dietary fiber, flavonoids, polyphenols and low content of lipid and protein. The plant has antimicrobial, anti-inflammatory, antioxidant, anti-diarrheique, anti-constipation, anti-ulcer and anti-absorptive of glucose activities in a gastrointestinal tract. It is concluded that this species has therapeutic and preventive properties in digestive tract on the basis of chemical and pharmacological features. (1)

Carob pulp has insoluble fiber which is known to affect blood lipids in animals like soluble dietary fiber. The study was conducted to investigate the beneficial effect of carob pulp preparation on serum cholesterol in humans. The regular intake of food products rich in carob fiber has beneficial effects on human blood lipid profile by lowering bad cholesterol level and improves LDL to HDL cholesterol ratio. The study concluded that consuming carob fibers effectively prevents as well as treats hypercholesterolemia. It could lower the risk of cardiovascular problems such as atherosclerosis, high blood pressure, strokes and heart attacks. (2)

The study shows that polyphenols extracted from pods of Carob displays strong free radical scavenging inhibition against discoloration of beta-carotene. An intake of carob pods offers antioxidant activities and is suggested for significant use for functional food and as a food ingredient for human and animals. (3)

The study conducted set up phytochemical content, cytotoxic activities and antioxidant capabilities of methanol extracts of Carob tree. Study show that carob extracts has high content of phenolic compounds which possess antioxidant activities by repairing cell damage caused by free radicals of the body and also counteract the cervical cancer cells. Carob is toxic to cervical cancer cells. The antioxidant activities of polyphenols eliminate harmful free radicals from the body.

Carob has low sugar, 1/3 of calories and fraction of fat content. It assists in prevention of spikes in blood sugar and considered as a safe dietary choice for diabetic patients. So it is a better substitute for chocolate and also provides fiber and protein which is lack in protein. It is a great choice for people who are trying to lose some weight without affecting tooth health.

Carob has fiber which inhibits secretion of postprandial ghrelin which is a hormone that informs body that it is hungry, released occasionally after eating. Carob can lower the chances of overconsumption and supports weight loss activity.

Carob has high content of calcium, phosphorus and gallic acid which counteract polio and osteoporosis. It is helpful for those children suffering from polio.

Carob is loaded with antioxidant, vitamin E and phytonutrients which are helpful for treating maladie such as cold and flu. Carob has gallic acid which offers anti-allerfic, antiseptic and anti-bacterial properties. It also treats coughs and anemia. It encounters lung cancer in exceptional cases.