Trending
You are at:Home»Vegetables»Carrot facts and health benefits 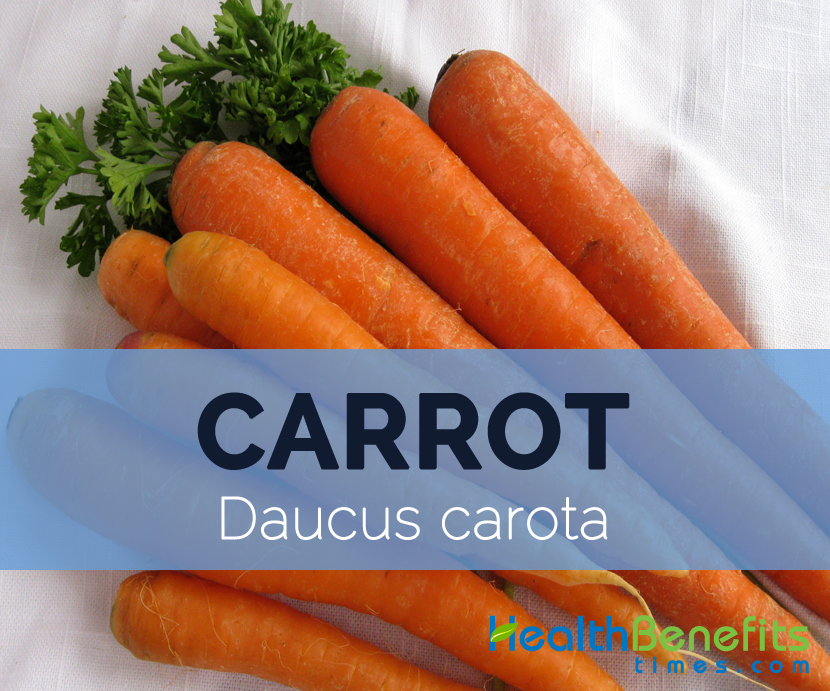 Carrot (Daucus carota) is an edible root vegetable of the Apiaceae family that was domesticated around 1000 Ce in Central Asia. It is cultivated and consumed throughout the world, being mostly eaten raw. Five varieties of Carrots are: Nantes, Chantenay, Miniature/Baby, Imperator and Danvers. Carrot owe sweet flavor. It is also called Bird’s Nest, Bishop’s Lace, Bird’s Nest Plant, and Crow ’s Nest, Carrot, Laceflower, Devil’s Plague, Rantipole, Queen Anne ’s lace and Wild Carrot. The average Carrot weights from 50-72 grams and can be orange, purple, red, black, yellow and white.

A naturally occurring subspecies of the wild carrot Daucus carota subsp. sativus, it has been selectively bred over the centuries to reduce bitterness, increase sweetness, and minimize the woody core. Most of the taproot consists of a pulpy outer cortex (phloem) and an inner core (xylem). High-quality carrots have a large proportion of cortex compared to core. Western carrot cultivars are commonly classiﬁed by their root shape. The four general types are: Chantenay, Danvers, Imperator, and Nantes carrots.

Carrots are one of the 10 most economically important vegetable crops in the world. In 2012, according to the Food and Agriculture Organization of the United Nations (FAO), almost 37 million tonnes of carrots and turnips were produced worldwide for human consumption. About 61.8% of world carrot production occurred in Asia, followed by Europe (22.6%), and the Americas (9.1%), while 5.4% was grown in Africa.

Carrot is native to Southern Europe but now widely cultivated in Canada, United States and Western Asia. Wild carrot is believed to be domesticated around 1000 Ce in Central Asia. By the 13th century, carrots were cultivated in Northwestern Europe and China.

Carrots are herbaceous, erect herb which grows up to 30-60 cm in height. The hairy and stiff stem reaches the height of 60-200 cm. The leaves are about 22 cm long; 20 cm wide; tripinnate, finely divided and lacy, and overall triangular in shape. The white flower is yield by the plant from June-August. It is a cool season crop preferring well-drained soil.

Carrots are biennial crops grown for the tap roots which are conical to cylindrical having the length of 5–50 cm with diameter as 2–5 cm. The root color ranges from orange through purple, red, black, yellow to white but the flesh is usually yellowy orange.

Carrots do not supply a signiﬁcant amount of calories to the human diet. However, they are highly nutritious and rich in a diversity of phytochemicals including carotenoids (some of them with provitamin A activity), phenolic compounds, ascorbic acid, α-tocopherol, vitamins D, K, B1, B6, and biotin, and polyacetylenes, many of which have antioxidant and other health promoting effects.

The content of carotenoids and minerals in carrots is dependent on the cultivar, season, management production, environmental conditions, and postharvest handling and storage conditions. Similarly, the cooking process can affect the nutritional contents as well as the bioavailability of carotenes and minerals.

Carotenoids are important micronutrients to which particular health related properties have been attributed. In general, carotenoids are mostly found in orange, red, and yellow colored fruits and vegetables. The carrot root is one of the richer sources of these pigments, and the orange rooted variety is the most familiar nowadays. The carotenoids found in orange carrots include α- and β-carotenes, lutein, zeaxanthin, and lycopene. Carotenoids belong to the tetraterpenes family and are divided into two classes, carotenes containing only carbon and hydrogen atoms (α- and β-carotenes) and oxycarotenoids (xanthophylls) which carry at least one oxygen atom such as zeaxanthin and lutein. According to the number of double bonds, several cis-trans conﬁgurations are possible for a given molecule. Carotenoids are lipophilic molecules which tend to accumulate in lipophilic compartments, like membranes or lipoproteins. During chemical reactions or under exposure to light or heating, these bonds can undergo isomerization from trans to mono- or poly-cis isomers, affecting the functional activity.

The major ﬂavonoids identiﬁed in orange carrots are quercetin, luteolin, kaempferol, and myricetin. Although ﬂavonoid levels in orange and red cultivar are comparatively low, the level of ﬂavonoids in black carrots is exceptionally high and can be comparable with many ﬂavonoid-rich fruits such as strawberry, plum, and cherry. Black carrots contain signiﬁcantly higher ﬂavonoids than red and orange cultivars because anthocyanin is only detected in this cultivar.

In addition to the high content of provitamin A carotenoids, carrots are also a reliable source of vitamin C, containing 5.9 mg of total ascorbic acid per 100 g fw. Carrots contain more vitamin C than grapes, nectarines, pears, and plums, among others. The stability of vitamin C in carrots can be inﬂuenced by factors from preharvest (including cultivars and environmental conditions) to harvest and to postharvest handling. The total vitamin C content in plant tissues increases through the high intensity of light during summer. The maturity of horticultural crops upon harvesting was also reported to affect the vitamin C content, resulting in lower concentration as the carrot age at harvesting time increased.

Polyacetylenes are a group of compounds widely distributed in the Apiaceae family. Falcarinol, falcarindiol, and falcarindiol-3-acetate are the main compounds identiﬁed in carrot root in a range from 20 to 100 mg/kg fw. Polyacetylenes are responsible for the bitter off-ﬂavor of carrots; they are potent skin sensitizers and irritants and are neurotoxic at high concentrations, and they have traditionally been viewed as toxicants. More recently, polyacetylenes have been considered bioactive compounds with potential effects on human physiology and disease. In vitro studies suggest that carrot polyacetylenes have anti-inﬂammatory activity in macro phages, biphasic stimulatory and cytotoxic effects on primary mammary epithelial cells, and cytotoxic activity against a number of cell lines. More research is needed to elucidate the health beneﬁts of these compounds.

Carrots are rich in Vitamin A and an abundant source of Vitamin D, C, K and E. It also possesses minerals such as calcium, potassium and magnesium. Due to the high amount of fiber, it acts as a cleansing agent. The serving size of 100 grams provides 41 calories, 4.74 grams of sugar, 9.58 grams of carbohydrate and 0.93 gram of protein. The same amount provides 3.30% of calcium needs, 6.56% of Vitamin C needs and 3.75% of iron needs per serving.

The carrot is a root used as a vegetable which is usually orange with a crispy texture. Taproot is an edible part of a carrot. It is a domesticated form of the wild carrot Daucus carota, native to Europe and southwestern Asia. It is added to the soups, salads, side dishes and snacks. Carrots are available throughout the year but its peak season is summer and fall.