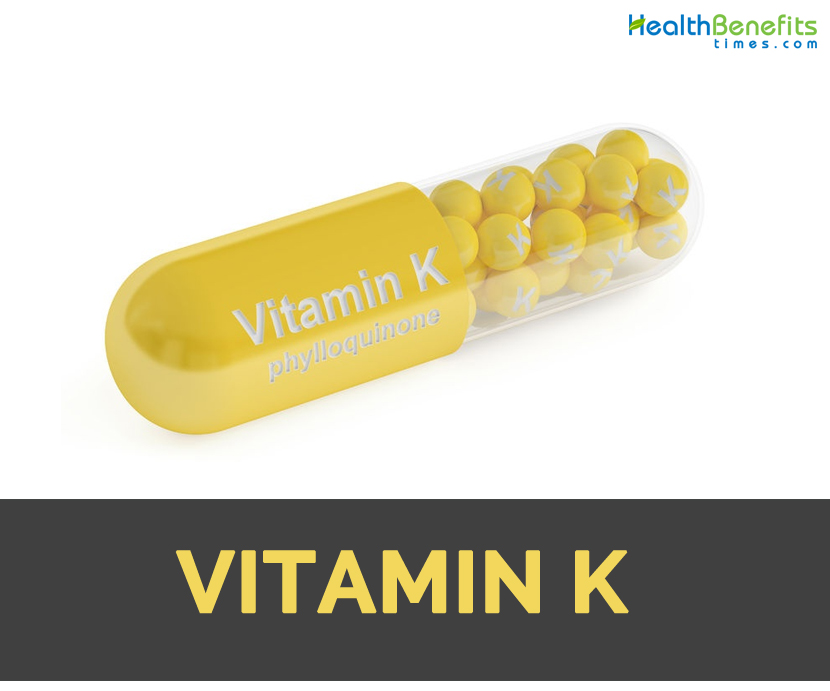 Named after the German word for blood clotting (koagulation), vitamin K is a fat-soluble vitamin, which is stored in fat tissue and the liver that helps the body make proteins needed for normal blood clotting. Vitamin K also termed as Quinone, is a general name for a few related compounds that possess vitamin K activity. Vitamin K has three forms: Phylloquinone, Menaquinone and Menadione. Phylloquinone is the form of vitamin K found naturally in plants; menaquinones are the form of vitamin K derived from bacteria; and menadione, which is not natural, is the synthetic (laboratory derived) form of vitamin K or the synthetic form found in supplements. Vitamin K is also required to make important bone proteins. Though there are actually three types of vitamin K (K1, K2, and K3), the vast majority of information and research on vitamin K focuses on K1. Therefore, this entry addresses vitamin K1, the natural form of the vitamin, which is the primary source of vitamin K that humans obtain from food.

Vitamin K is discovered in 1929. More has been learned about the exact role of vitamin K and information on vitamin K frequently addresses its blood clotting properties. People who have low levels of vitamin K increase their risk for excessive bleeding, which may begin as oozing from the gums or nose. In addition, vitamin K is used to counteract an overdose of the blood thinner Coumadin. It has also been repeatedly shown that vitamin K supports bone health. People with deficient levels of vitamin K are at increased risk for bone fractures. There is limited evidence that vitamin K may be useful for postmenopausal women who are at increased risk for fractures. It may also be important in the prevention and treatment of other diseases, including cancer and cardiovascular disease. There is actually not one vitamin K, but rather a group of related chemicals. They may not all be identical in function.

Many vegetables contain excellent amounts of vitamin K. These include kale, spinach, mustard greens, collard greens, parsley, broccoli, Brussels sprouts, asparagus, cabbage, bok choy, green beans, and cauliflower. Top fruit sources of vitamin K are kiwifruit, blueberries, prunes, and grapes. Soybeans and miso are two good legume sources. Fish, liver, meat, eggs, and cereals contain small amounts. Vitamin K may be included in a multivitamin, and vitamin K supplementation may be readily purchased online in pill and liquid forms. In some instances, medical providers give a shot of vitamin K. Still, before beginning a vitamin K regime, it is a good idea to discuss the issue with a medical provider.

How Much Vitamin K Do We Need?

Vitamin K has crucial role in preventing calcification of arteries. The relaxed and unhardened arteries help the blood to flow properly. The accumulation of calcium in arteries is the cause of artery hardening which is associated to heart attacks or walls clogging around heart. Literally, Vitamin K assists in carrying calcium out of arteries. Vitamin K2 is helpful for this process. This form of vitamin is formed in intestines.

Vitamin K is considered to be powerful in preserving integrity of bone structure in the body. It enhances proper absorption and utilization of calcium in the body. Dairy products contain calcium and Vitamin K which is a great combination to keep bones healthy.

Vitamin K is demanded for overall bone health and slows down bone density loss which is age related disease. Study have shown that people who intake Vitamin K on regular basis had 25% low chances of bone density loss than others.

Symptoms of PMS could be painful and cramping due to excessive bleeding. Vitamin K helps in regulating hormones in the body and lowers the flow of blood by providing relief. It lowers pain and cramps to great extent.

Brain cell membranes carry sphingolipid metabolism dependent on proteins which work with Vitamin K only. This vitamin is must for brain to function properly being a part of biologically present molecules in brain.

Vitamin K has anti-inflammatory properties and helps to adequately circulate blood. Vitamin K2 is a part of gut bacteria keeping the body away from toxins causing inflammation. Vitamin K possess bone preservation qualities which protects joints from diseases such as osteoporosis and arthritis especially in women suffering from menopause.

Vitamin K is able to heal wounds by promoting clotting effect. It enhances quicker healing as it repairs skin and accumulates cells. It enhances function of patching up tears in skin and speeds up the healing process. Individuals with Vitamin K deficiency experience slow healing that might cause an infection.

Cancer is regarded as a deadly disease and its treatment is much more painful than the disease itself. Incorporate Vitamin K to the diet as this vitamin is observed to lower inflammation associated to cancer and helps to stabilize patients suffering from liver cancer. It provides strong preventative effects on prostate, colon and also on symptoms of skin cancer. It is able to repair damaged cells.

Babies who are prone to hemorrhaging are injected Vitamin K. Babies being prone to asthma and other respiratory ailments recommend the doses of Vitamin K drops.

Vitamin K performs to protect body internally by assuring healthy digestion and cardiovascular system. It strengthens immunity by enhancing adequate digestion and discarding the chances of various chronic illnesses. Foods loaded with Vitamin K are recommended for those who need immunity boost.

Can Too Little or Too Much Vitamin K Be Consumed?

Vitamin K deficiencies appear to be uncommon. Green vegetables tend to have excellent amounts of vitamin K. A single one-cup serving of broccoli provides more vitamin K than people need. Yet some people are at increased risk for vitamin K deficiency.

People who have a medical problem that affects absorption in the digestive tract, such as Crohn’s disease, may not absorb sufficient amounts of vitamin K. That may also be true for people who have taken certain medication, such as antibiotics, for long periods of time. People who are malnourished or drink alcohol in excess may have insufficient vitamin K. For these people, a health provider may recommend vitamin K supplementation. People with low levels of vitamin K are at increased risk for bleeding problems and osteoporosis, a condition in which the body’s bones become increasingly more porous.  Symptoms of vitamin K deficiency include bruising, gastrointestinal bleeding, excessive menstrual bleeding, and blood in the urine. Though vitamin K deficiencies are thought to be rare in adults, vitamin K deficiencies are very common is newborn infants. Vitamin K does not cross the placenta to the fetus in sufficient amounts, and it may require several weeks for a newborn to develop enough vitamin K. That is why newborns are generally given a single injection of vitamin K. There is no evidence that consuming vitamin K in food may lead to toxicity.