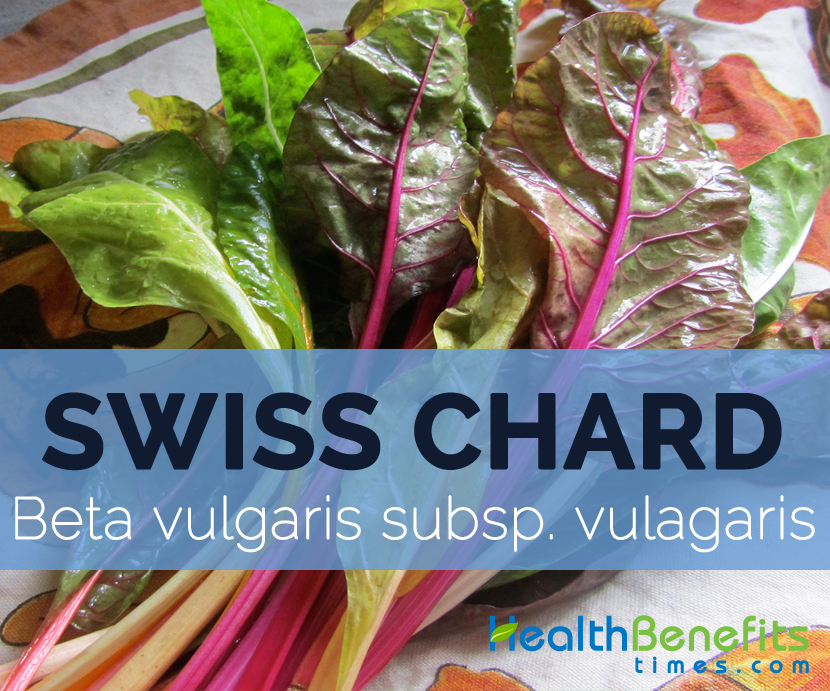 Swiss chard (Beta vulgaris subsp. vulagaris) is an edible plant in the family Chenopodiaceae native to the Mediterranean region.

It is a biennial plant, usually grown as an annual, which grows upto 1 – 3 feet (506 mm) tall. Swiss chard is a cool season crop which thrives in well- drained soil. The leaves are broad, wavy, wrinkled which sizes about 37 cm long and 25 cm wide. The dark green leaves are glossy and crisp. The stems are colorful mainly white, orange, purple and ivory with pink stripes. The plant of Swiss chard has deep root system which is hard and woody. The bright red stalk reaches from 10 – 12 inches high. The plant contains 2 to 8 fine seeds.

In 48.0 gram serving, Swiss chard (raw) provides 9 calories and possesses good amounts of vitamins B6 with 3.69% of DV. It is low in protein, carbohydrates, dietary fiber and fat.

Swiss chard possesses an impressive amount of phytonutrients which are the source of anti-inflammatory, antioxidant properties. It contains low amount of calories which makes it a great dietary food. It is a good source of Vitamin K, C, A, potassium, magnesium, dietary fiber and iron. The antioxidants such as carotenoid, betalain and polyphenol antioxidants prevent the free radical damage, diseases and inflammation.

The leaves of Swiss chard contain an adequate amount of calcium which is essential for the good health of bones.  Minerals such as Vitamin K, Magnesium and Calcium help to promote the growth and development of bones.

Swiss chard provides a good source of Vitamin K and potassium which is found in brain in significant. It helps to enhance the cognitive abilities and development. The addition of Swiss chard to the diet helps to promote the brain function.

Iron and copper deficiency results in anemia due to which one experience the symptoms such as fatigue, weakness, lack of concentration and stomach disorders. The consumption of Swiss chard helps to enhance the circulation of blood and oxygenation of organs in the body. (3)

Swiss chard contains the phytonutrient, anti-inflammatory antioxidants along with potassium which helps to lower the blood pressure due to which it also lessens the stress on cardiovascular system. The consumption of Swiss chard helps to prevent the heart ailments such as heart attacks, atherosclerosis and strokes.

Huge amount of beta-carotene in Swiss chard helps to promote the health of eyes and lowers the chances of glaucoma, macular degeneration, night blindness and other eye ailments. (4)

The presence of Biotin which is an organic compound helps to stimulate the hair follicles and also increases the texture and luster of hair. Swiss chard possesses biotin in significant amounts. (5)

Swiss Chard is the member of the beet family which was cultivated for thousands of years in Europe. Due to its huge cultivation in Switzerland it was referred as a Swiss Chard. It is a perfect substitute for spinach. It possesses thicker leaves. Swiss chard is an excellent source of vitamin A, C, K, manganese and magnesium.