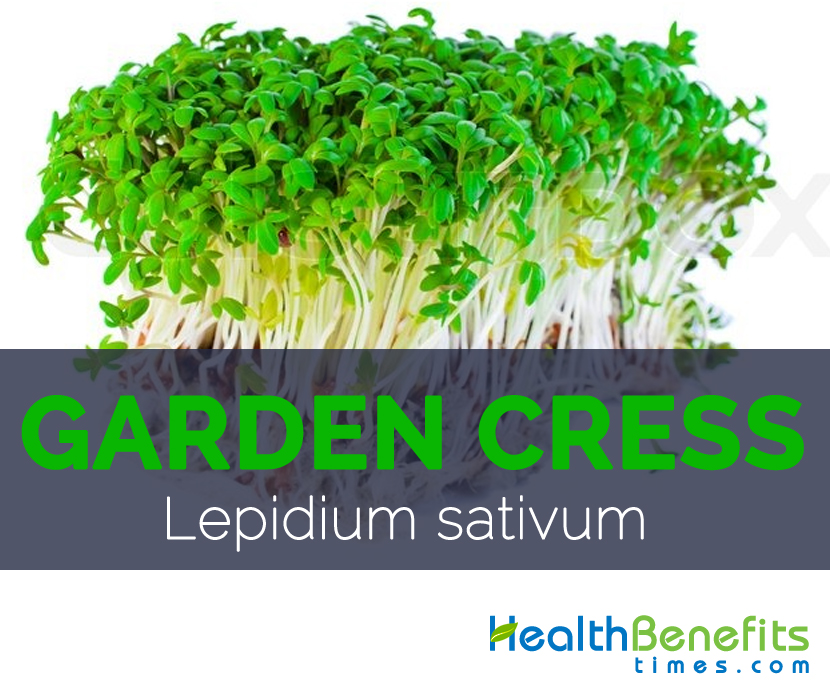 Garden Cress is an annual, erect herbaceous plant sized 60 cm (24 inches) when completely matured that belongs to the mustard family. Garden cress is found growing along the roads, in the wastelands, mountain meadows and gardens. It prefers cool growing conditions with full sun or partial shade and thrives well in loose, moist, well-draining and amended with compost and a well-balanced fertilizer. It has stringy white root with erect, bluish-green, multi-branched stem that can reach 8 to 24 inches in height. Basal leaves of garden cress are compound-lobed and equipped with long petioles. Leaves on the upper parts of the stem are usually pinnately lobed. Garden cress has white to pinkish flowers which is only 2 mm (1/12 of an inch) across, clustered in branched racemes and consists of both types of reproductive organs and is found blooming from June to August. Fruits are two-seeded, elliptic, flat, tip broadly winged, with notched tip, grey, approx. 6 mm (0.24 in.) long silicula. Stalk quite erect, 5–8 mm (0.2–0.32 in.) long. Seeds are tiny and red brown colored.

It is part of human diet since the antique times. Stems, leaves and seeds of garden cress are eatable but only the leaves and stems are eaten raw in salads or used for other culinary purposes. This culinary and healing herb has a tasty, peppery taste comparable to leaf mustard and watercress, which is actually not surprising considering that garden cress is botanically related to both. Due to its higher nutritional value and distinctive flavor, garden cress makes a tasty and healthy addition to salads and sandwiches. The seeds are roasted or cooked before eating.

It is considered to have originated from Persia and later spread to the gardens of India, Syria, Greece and Egypt. Garden cress is still popular and frequently consumed type of leafy vegetables in Europe, especially in Scandinavia, Netherlands, England and France (centers of the garden cress cultivation) where it is grown commercially. Due to its delightful and peppery taste it is grown all over the world and is used as healthy addition to salads and sandwiches.

This culinary and healing herb has a tangy, peppery taste similar to leaf mustard and watercress. Because of its distinctive flavor and high nutritional value, garden cress makes a tasty and healthy addition to salads and sandwiches. Here’s the full scoop on the health benefits of garden cress:

Scientific research states that vitamin C help to keep cardiovascular system healthy, so adding garden cress in your diet may be a smart thing to do if you’re trying to improve your cardiovascular health. Recent evidence suggests that CRP levels (C-reactive protein levels) are a virtuous measure of a person’s heart disease risk, potentially even better than cholesterol levels.

Furthermore, garden cress is amplified with vitamin K, another important nutrient which is supposed to play a main role in maintaining cardiovascular health. Simply by adding just half an ounce of garden cress to your salad you’ll be covering nearly 100% of the Daily Value of vitamin K!

Garden Cress consists of considerable amount of Vitamin A that neutralizes free radicals in the body that cause tissue and cellular damage. Vitamin A helps to prevent the cells from becoming overactive. When the immune system overreacts to food proteins, this causes food allergies and ultimately inflammation. Vitamin A intake can help to reduce the risk of certain types of food allergies because it helps to prevent this dangerous overreaction. Reduced levels of inflammation are connected with a lower risk for neurodegenerative diseases like Alzheimer’s disease and Parkinson’s disease.

Manganese supplements present in Garden cress are linked to reduce osteoporosis as well as osteoarthritis syndrome because it is an essential mineral which is proven to add to bone density and overall mineral density. Raw garden Cress consists of 0.276 mg of Manganese which is 12% of the daily recommended value.

Vitamin B2 which is found sufficiently in Garden Cress can help in treating numerous nervous system problems like Alzheimer’s disease, numbness, multiple sclerosis, epilepsy and anxiety, among others. It is thought that vitamin B2 (riboflavin), when used together with vitamin B6, is effective in dealing with painful symptoms of Carpal Tunnel Syndrome.

Vitamin B9 is a reliable resource for controlling defects during pregnancy and the birth of a child. Raw Garden cress consists of 40 µg of vitamin B9 which is about 10% of the daily recommended value. It is a common situation that pregnant women maintaining a diet deficient of this vitamin are far less probable to deliver a healthy child. Neural tube defects are one of the common birth defects caused due to vitamin B9 deficiency. Thus, Vitamin B9 effectively improves the chances of giving birth to a healthy, happy child.

Garden cress consists of vitamin B6 which is required to create hemoglobin in the blood, that is transported by red blood cells throughout the body to help bring oxygen to cells and to mobilize iron. When someone doesn’t make sufficient red blood cells, it may result in Anemia leading to symptoms like fatigue, aches and pains, and more. Research shows that consuming amply of vitamin B6 can help lower symptoms of anemia and prevent it from occurring in some instances.

Other traditional uses and benefits of Garden Cress