Trending
You are at:Home»Foods»Facts and benefits of Miso 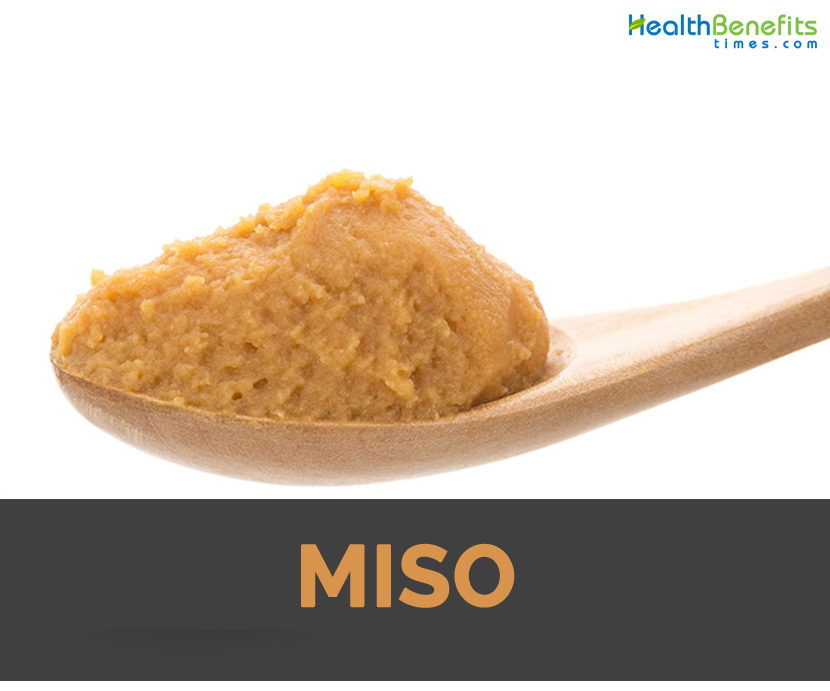 Miso is a traditional Japanese seasoning which is prepared by fermenting soybeans with salt and koji or consistently barley, rice and other ingredients. It is a thick paste which is used for spreads, sauces, pickling vegetables, meats and combined with dashi soup stock for serving as Miso soup. It is rich in protein, minerals and vitamins besides that Miso has vital nutritional role in feudal Japan. In Japan, Miso is used widely in both modern and traditional cooking but has been achieving worldwide interest. Usually Miso is salty but its aroma and flavor depends on various factors in ingredients and process of fermentation. Various varieties of Miso are interpreted as sweet, salty, fruity, earthy and savory. The ingredients used in producing Miso are fuse of soybeans, rice, barley, millet, buckwheat, wheat, rye, cycad and hemp seed. Recently, other countries have produced Miso from corn, chickpeas, amaranth, adzuki beans and quinoa. The time of fermentation could range from five days to several years. The broad variety of Japanese Miso is classified in terms of color, grain type, background and taste. The paste is rich in protein and provides instant flavor foundation. Miso adds umami taste to all types of dishes such as broths/soups, vegetables, salad dressings, glazes, stews and marinades. Miso is an excellent source of minerals, Vitamin B, Vitamin K, E and folic acid. This being a fermented food, it offers beneficial bacteria to gut which assist to remain healthy, happy and vibrant as good gut health is associated to overall physical and mental illness. Miso contains zybicolin which is a binding agent that assist in elimination and detoxification of elements which are taken into body through radioactivity, industrial pollution and artificial chemicals in soil and food system.

Miso is a Japanese condiment which came from China. Doujiang who is a Chinese predecessor to Miso invented the way for preserving soybeans. This plant was a substantial crop for replenishing soil but beans spoil quickly. Chinese started to ferment soybeans to preserve them and keep them edible. As there are various types of Miso, depending on the type of grain, how long it’s aged and proportion of ingredients; flavor can be salty or sweet, pungent or mild. It is categorized into dark and light. Light misos are mild as well as slightly sweet. Generally, light yellow and white misos have less salt and more koji which speeds up fermentation. Miso of this type is aged less for sweet and lightly fermented flavor. Brown and dark red misos have deeper flavor. It is made with more salt which requires longer time of fermentation (generally one to three years) which results to complex and umami rich flavor having a bit of funk. Additionally, red aka miso is made with white rice.

Miso’s history is traced back to China. Its ancestor “hisio” was the seasoning produced from fermenting soybeans, alcohol, wheat, salt and other ingredients. Miso was believed to be a luxury food item which is limited to only wealthy aristocrats. Soybean paste was introduced to Japan around 7th century. Initially, Miso was prepared without grinding soybeans till Muromachi era. In Kamakura era, meal is prepared from rice, miso, dried fish and fresh vegetables which are quite popular. During Muromachi era, Buddhist monks found that soybeans could be grounded into paste for introducing new cooking methods to use miso for flavoring other foods. The producing process of Miso is simple which led to spread of homemade versions throughout Japan. At the time of Sengoku era, Miso was used as provisions for military and making miso was a vital economic activity for daimyos of that era. During Edo period in Japan, Miso is called kuki and hishio and assorted types of Miso were formed in Japan based on climate and culture. In United States, Miso is gaining wide popularity due to intense recognition of macrobiotic diet and escalating interest in Asian food culture.

Here are some health benefits offered by Miso:

As Miso is fermented, it contains live active cultures which acts like a yogurt in digestive system. Fermented miso is an excellent source of beneficial probiotics with no dairy for those with lactose or dairy sensitivities to foods such as yogurt, kefir and cultured cheeses. Fermented foods contain probiotic bacteria which thrive in our gut microbiota by increasing immunity and promoting digestion. Probiotics helps to promote immune function, enhance digestion, better cognitive health, reduce the chances of allergies, mood regulation, lower chances for obesity and appetite control.

Miso soup is a healthiest way to promote digestion. Miso contains beneficial probiotics which combats digestive problems that caused an imbalance in gut bacteria such as diarrhea, constipation, bloating, gas and IBS. Probiotics is helpful for those people who are suffering from serious problems such as candida viruses, food allergies, leaky gut syndrome and ulcerative colitis. Probiotics cleanse the system and is known to speed up the ability of the body to heal gut associated illnesses.

Though Miso has high content of salt, it is associated with prevention of hypertension according to both experimental and epidemiological evidence. Researchers believed that sodium found in Miso acts differently in comparison to sodium chloride alone. The biological effects may be caused due to longer fermentation periods of soybeans, rice grains and barley grains above 180 days. The conducted study shows that rats with systolic blood pressure that received 2.3 percent of sodium chloride was increased significantly but the rats who receive same amount of salt from Miso do not experienced these effects. Despite the intake of sodium increased, the blood pressure of rats did not increased when fed diet of miso.

Miso is a probiotic food which activates certain enzymes found in grains and beans that allows better absorption of nutrients such as manganese, copper, vitamin K, vitamin B and phosphorus. Soybeans when fermented include various phytochemicals such as isoflavones, vegetable fiber, melanoidin and saponin. Miso is a great source of plant based protein which provides two grams in a serving of one tablespoon.

Body requires water, amino acids, minerals and vitamins for flushing out alcohol from a system after a night of drinking. Miso soup contains all these things along with sodium which helps to rehydrate.

Most of the people are familiar with dark brown coloured miso but in fact there are many variations of Miso, each with a difference in base ingredients, cooking methodology and fermentation times.

Also known as rice miso, it could be yellow, red, yellowish white etc. Reddish miso is prepared from steamed soybeans. Whitish miso is made from boiled soybeans. In Hokuriku and Kinki areas, Kome miso is consumed more.

Also called barley miso, it is a whitish miso which is produced in Western Chugoku, Kyushu, and Shikoku areas. In the northern Kanto area, another reddish mugi miso is produced which possess a peculiar smell.

Soybean miso is a darker, more reddish brown in comparison to kome miso. It is not sweet as other varieties but has astringency and good umami. It needs a long maturing term. Mostly, it is consumed in Aichi prefecture, part of Mie prefecture and part of Gifu prefecture. Soybean miso is also known as hatchō miso which has its origins during the Sengoku era in Mikawa Province. The processing method remains unchanged with large wooden barrels and stones on the lid.

Awase miso or mixed miso comes in various types as it is a combination or compound of other varieties of Miso. It promotes the weak points of each type of Miso.

Red miso is aged for more than one year. The color gradually changes from white to red or black due to the Maillard reaction. It has saltiness flavor with some astringency with umami. It is a stronger-tasting miso.