Trending
You are at:Home»Herbs and Spices»Facts and benefits of Stinking Goosefoot 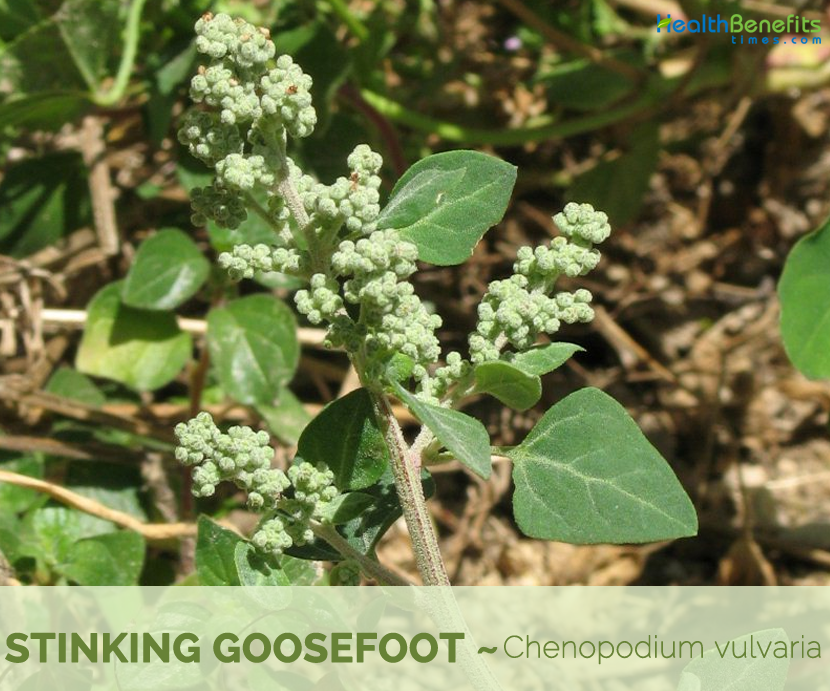 Stinking goosefoot scientifically known as Chenopodium vulvaria is a foul-smelling plant or weed. The plant is a member of the family Chenopodiaceae, which also contains other similarly unattractive annual plants. Apart from stinking goosefoot it is also known as notchweed, Arroche Puante, Chénopode Fétide, Chénopode Puant, Arrach, Dog’s Arrach, Goat’s Arrach, Goosefoot, Herbe de Bouc, Netchweed, Oraches, Stinking Arrach, Stinking Goosefoot, Stinking Motherwort and Vulvaire. The generic name Chenopodium, from the Greek chên, ‘oca’, and podion, ‘foot’, refers to the fact that there are species of this genus with leaves that resemble the foot of a goose. The plant gives off a nauseating smell of rotten fish, due to the presence of trimethylamine. It is an annual weed of bare soil and is not tolerant of competition. It is largely found where soil has been disturbed and in waste places by the sides of roads and walls.

The stalked leaves are oval, wedge-shaped at the base, about 1/2 inches long. Leaf blade grey-farinose especially beneath, greener above, longer than or equal to petiole, 0.5-3 cm long, broadly trullate or broadly ovate to ovate, margin entire, in large leaves sometimes with a fairly acute angle on each margin at broadest part, base truncate to short attenuate, apex obtuse to acute.

Its small flowers are grouped in short inflorescences that are axillary and terminal. They have 5 farinaceous tepals that measure 0.5-0.8 mm in length, 5 stamens and a pistil. They usually open between June and October. There are no petals and the flowers are wind-fertilized. Its fruits are membranous, surrounded by the tepals and contain a single seed of dark brown and gleaming, which has a shape reminiscent of a casserole with its lid and measures 1-1.5 mm in diameter.

The whole plant is covered with a white, greasy mealiness, giving it a grey-green appearance which when touched, gives out a very objectionable and enduring odor, like that of stale salt fish, and accounts for its common popular name: Stinking Goosefoot.