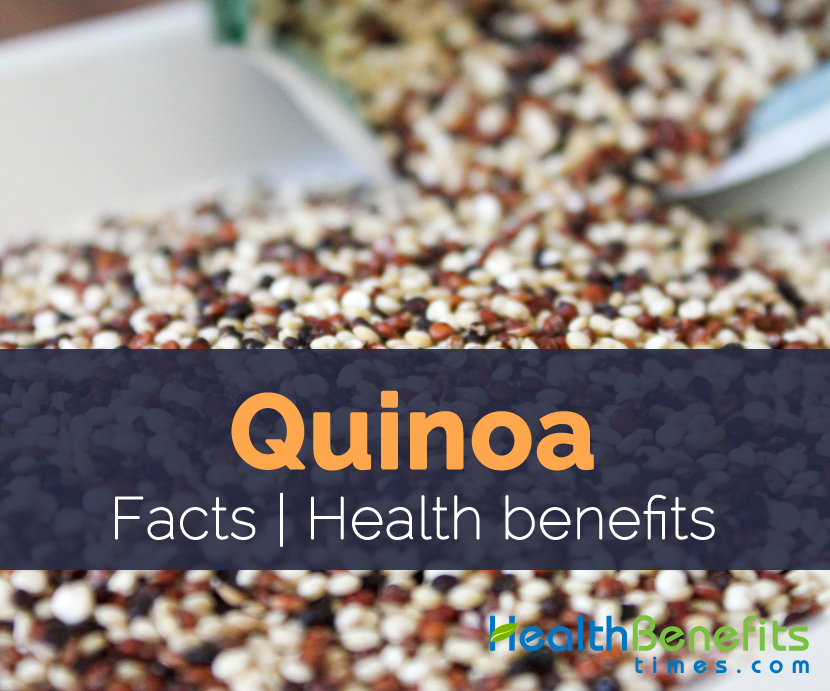 Most of us call quinoa (pronounced “keen-whah”) a grain, but it’s actually a seed. It is actually a Pseudo cereal as it is consumed and cooked just like grain and also has comparable properties. It has been preserved like grain and consumed as one of the chief food sources along with potato and maize since ancient times. Quinoa scientifically known as Chenopodium quinoa is widely cultivated plant in the family Chenopodiaceae. It is considered to have originated in the Andean region of South America. White quinoa, Red quinoa and Black quinoa are some common varieties of Quinoa. It is known by different common names like Quinoa, Quinua. Apart from in Argentina it is referred to as Dawe, Quinoa in Brazil, Libatop in Hungarian and Farinello in Italian. Brown to reds colored Quinoa is actually full of important Nutrients, minerals and Vitamins required for living a healthy life.

Quinoa is an indehiscent achene, protected by the perigonium, thin-walled and one-seeded about 2 mm (0.08 in) in diameter. Its color range from ivory to pinks, brown to reds, or almost black depending on the variety. It features nutlike flavor and taste like brown rice crossed with oatmeal. Seeds can be harvested during Aug to September. Seeds are 1–2.6 mm, smooth, lenticular, white, red, yellow, purple, brown or black along with thin leathery testa and endospermous. Quinoa seeds show outer seed coat that contains bitter ingredients known as saponins that must be detached before eating. Since it is extremely nutritious it is found used in number of healthy food recipe.

Quinoa is considered to have originated from Andean region of South America. It has been effectively domesticated 3,000–4,000 years ago for human consumption.

Research suggests including quinoa to the gluten-free diet of patients with celiac disease is well-tolerated, and does not worsen the condition. Quinoa, an extremely nourishing grain, is usually suggested as part of a gluten-free diet. However, research suggests that quinoa storage proteins can motivate innate and adaptive immune responses in celiac patients.(1)

Manganese is a mineral naturally occurring in our bodies in very small amounts. Apart from that it can also be found in quinoa in considerable amount. Manganese is an essential mineral related to the relief of osteoporosis and osteoarthritis syndrome. It is an essential mineral to add bone density and overall density. One cup cooked Quinoa consists of about 1.167 mg of Manganese which is 50.74% of the daily recommended value. Therefore consuming quinoa is recommended to prevent from Osteoporosis.

Phosphorus is regularly noted as the second most generous mineral in the human body, and is second most significant element regarding maintaining bone health and integrity, behind calcium. Apart from that phosphorus plays an important role in helping effective digestion. It stimulates the digestion of niacin and riboflavin in an effective way. Phosphorous directly clears up constipations, indigestion, diarrhea, and generally tones up the digestive system for regular, healthy bowel movements. This will boosts the health of the digestive system, as well as of the kidneys, since the toxins are being removed from the body, rather than recycling through the kidneys and stressing that system. So Quinoa must be included in normal regular diet to solve all these problems as one cup cooked Quinoa consists of 281 mg of Phosphorus which is 40.14% of the recommended value.

Copper is important for an overall healthy existence, as this mineral enables normal metabolic process along with amino acids and vitamins. Copper cannot be made within the body and thus needs to be added from external food sources. Quinoa consists of considerable amount of copper which is essential for the proper function of the thyroid gland. One cup cooked quinoa consists of 0.355 mg of copper which is 39.44% of the recommended value. Though excess copper is also a main reason for thyroid malfunction, therefore well balanced amount of copper is required in the blood. Imbalanced can result in either hypothyroidism or hyperthyroidism.

Magnesium is an essential mineral for staying healthy. It is necessary to keep muscle and nerve functions normal and to keep the heart beating rhythmically. Deficiency of magnesium may lead to heart disease, often leading to fatal results. Magnesium rich food must be included to decreases various hazards related to heart. Quinoa intake protects the heart from uneven heartbeats as well as caringly shields your heart from damage, mainly from muscle stress. One cup cooked Quinoa includes 118 mg of magnesium which is 28.10% of the daily recommended value.

Vitamin B9 is also known as folic acid, and it belongs to the vitamin B complex family. It is vital for the acceleration of metabolic processes in the human body. Vitamin B9 is beneficial for the treatment of patients suffering from anemia resulting from a folic acid deficiency. Vitamin B9 riche foods like Quinoa, green vegetables, cheese, and mushrooms as well as synthetic folic acid supplements can be used to treat these ailments resulting from folate deficiency. Similarly folic acid supplements may also be included as part of the recommended treatment of mainly menstruation-related problems as well as some leg ulcers.

Poor diet and nutrient deficiency are the main cause of several eye diseases. Research has proven that consuming Vitamin B6 rich foods such as Quinoa together with other vitamins like foliate can help to prevent different eye disorders as well as loss of Vision.

Quinoa intake is considered to help slow start of certain eye diseases like age related macular degeneration. One cup cooked Quinoa includes 0.228 mg of Vitamin B6 which is 17.54% of the daily recommended value.

Dietary fiber, also known as roughage or bulk, includes the parts of plant foods body can’t digest or absorb. Dietary fiber can provide several health benefits too, like helping to maintain a healthy weight and decreasing the risk of diabetes as well as heart disease. Soluble fiber help to slow the absorption of sugar and improves the blood sugar level in diabetic people. Healthy diet which contains insoluble fiber may also decrease the risk of developing type 2 diabetes.

Other Traditional uses and benefits of Quinoa