Trending
You are at:Home»Vegetables»Watercress-Nasturtium officinale 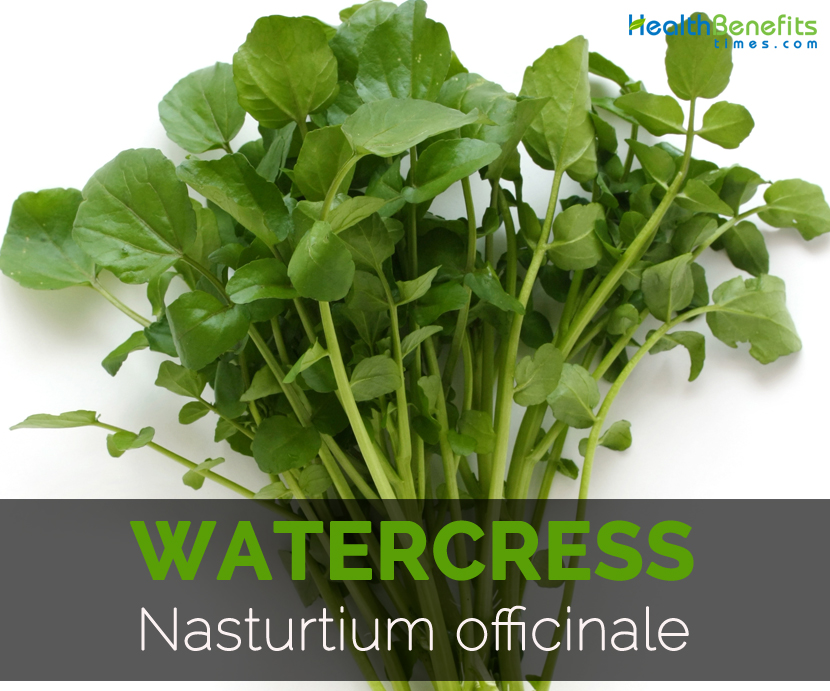 Nasturtium officinale referred to as Watercress, is an aquatic or semi-aquatic plant. Watercress is genetically and closely related to mustard plant sharing their pungent and peppery flavor. Nasturtium officinale, which is widely used as a vegetable, is a species of Nasturtium officinale W.T. Aiton, native to Western Asia, Europe, India and Africa. Other common names of Watercress include Common cress and Garden cress. This perennial plant can reach a height of 16 inches (41 cm). The white flowers are only 3 to 5 mm in length which has four petals. This herb is cultivated for its stems and leaves which are used in salads as well as garnishing. It could found in found in cold clumps and freshwater. Watercress is loaded with various antioxidant and anticancer properties as well as minerals and vitamins. Various varieties of watercress are: Garden cress, Korean Watercress, Nasturtium, Upland cress, Cuckoo flower and Winter cress.

Native to Western Asia, Europe, India and Africa, today it is widely distributed around the whole world. It is introduced to South and North America, Australia, Southern Africa and New Zealand. As it was introduced to Canada and United States, it is found in every state and provinces. Watercress is common in Pacific Northwest and also found in Oregon, Idaho and Washington.

It is considered as the old plant from the times of Greeks and Romans. Greeks used Watercress to maintain the healthy liver and as a blood cleanser. Watercress was used since the 1st century as a therapeutic herb. It was provided to the children for the development and to treat psychological illness. Within 1800’s, it became popular as a common tea in the Southern England.

Romans used Watercress for their peppery taste in the salads where only vinegar and oil were added to enhance its flavor. As it provides zing or life to the salads, Watercress is known everywhere. Reportedly, Watercress was originally cultivated by Nicholas Messier all over 16th century in the Germany.

In the nineteenth century, the industrial cultivation of Watercress was carried out. It got introduced in Canada, South America, West Indies, United States where it was naturalized because in US, the weather conditions was right with plenty water where the Watercress spread. Today, United States is considered as the highest cultivator of Watercress in the world.

Regional in Europe and Asia, Watercress is loaded with minerals and vitamins such as iodine, calcium, potassium, Vitamin E, A and C.

Nasturtium officinale grows 16 inches (41 cm) in height. The leaves are pinnately lobed, alternate, shiny, green and 6 inches long. The flowers are 3-5 mm long with four white petals. The fruit is 10-25 mm long and 2 mm wide. It has thin root which are white, fibrous and abundant. The plant grows in a wet and rich soil.

Watercress is a green leaf vegetable which is an excellent source of minerals. It also provides good amount of vitamins and proteins. Along with antioxidants, it has anti-cancer properties which help to prevent prostate, colon, lung and breast cancer. It is also good to maintain the cardiovascular health, eliminates free radicals and prevents cell damage.

The study shows that the extract of Watercress helps to detoxify the environmental toxicants and carcinogens which are found in the cigarette and also provides a negative impact on the health. Smokers are at high chances for getting lung cancer. The intake of Watercress extract prevents the smokers from developing the cancer and acts a great cancer fighting tool. The trial shows that the extract of Watercress reduced the activation of nicotin by about 7.7 percent. (1)

The compound found in Watercress interferes in the protein function “Hypoxia Inducible Factor” which plays a vital role in the development of cancer. The research shows that the intake of Watercress interrupts the pathway which is associated with the cancer development.  The study conducted on breast cancer patients shows that with an intake of 80 grams of Watercress, it assists to limit the growth of cancer in women.

The study shows that the phytochemical compound found in Watercress enhances the defense power and also protects the cells. Watercress possess high amount of Vitamin C that helps to lower the oxidative stress caused due to cancer. (2)

The studies have provided the mix results but many have made conclusions that the intake of folate in the regular basis helps to prevent the colorectal cancer. It was seen when the folate was intake for more than 15 years.

Watercress belongs to the family brassica that provides the beneficial and positive effect on maintaining the thyroid health. Watercress helps to decrease the production of thyroid hormones and considered more beneficial when consumed raw. In order to maintain the nutritional value, Watercress should be steamed lightly.

Along with the nutrients, Watercress possesses secondary metabolites that help to reduce the chances of chronic diseases. The plants such as Watercress help to reduce LDL cholesterol that helps to reduce the chances of cardiovascular conditions such as chronic heart disease and arteriosclerosis. Watercress also possesses Vitamin C which acts as an antioxidant and reduces damage of heart tissue which are the cause of oxidative stress. Vitamin C plays an active role in the embryonic cells process that develops into cardiac mycocytes and improves heart health.

Watercress is rich in calcium which helps to lower the chances of osteoporosis. Calcium helps to build and repair bones by increasing the osteoblasts production. The calcium is effective for the youthful as well as aging population and it helps to enhance the bone density. It possesses the good amount of folate which is a vital nutrient to maintain the bone density. The post-menopausal women could be benefited by including folate in the die as it prevents the osteoporosis conditions.

The consumption of calcium through dietary intake helps to prevent the conditions such as diabetes, cardiovascular, hypertension and metabolic syndrome. Watercress is helpful to adverse the cardiac effects. The addition of 500 mg to the daily diet is enough for women. The food sources are the healthiest way to maintain the adequate amount of calcium in the body. The studies show that the daily intake of Watercress helps to repair the damage cells and prevent some cancers, thyroid ailments and cardiovascular conditions.

Folate is a nutrient which has a vital role to maintain health and prevent birth defects. The alcohol consumption might affect the folate levels. The foods rich in folate such as Watercress help to prevent and treat some health conditions.

Vitamin C has the ability to treat the physiological systems and prevent disease when it is consumed in high amount. Watercress is rich in Vitamin C more than in orange which helps to maintain the adequate amount of Vitamin C in blood levels that has various health benefits. It also helps to repair the brain tissues, lowers the chances of blood cell damage as well as common cold.

Vitamin C helps to prevent the changes in cognition such as Alzheimer’s. It assist to lower the bleeding in the stoke occurrence. Those with traumatic head injury have the lower Vitamin C in the blood. The studies show that Watercress prevents the damage and also improves the brain function and injury. The high amount of Vitamin C assists in the neuron activities.

The study shows that the intake of Vitamin C with Vitamin E helps to lower the oxidative damage to the RBC (Red blood cells). The study is associated with the high intake of Watercress and the nutrients found in the Watercress are beneficial to the body.

The study results that Vitamin C effectively reduces the chances of cataract development. Watercress is an excellent source of Vitamin C which is effective in preventing the cataract.

The study which was conducted on the children having asthma showed that the high amount of Vitamin C of 0.2 grams daily helps to provide relief from the pediatric asthma. It raises the forced expiratory volume (FEV). The dampness and mold exposure result to increase in 21% whereas no exposure result to 37% increases of FEV per second.