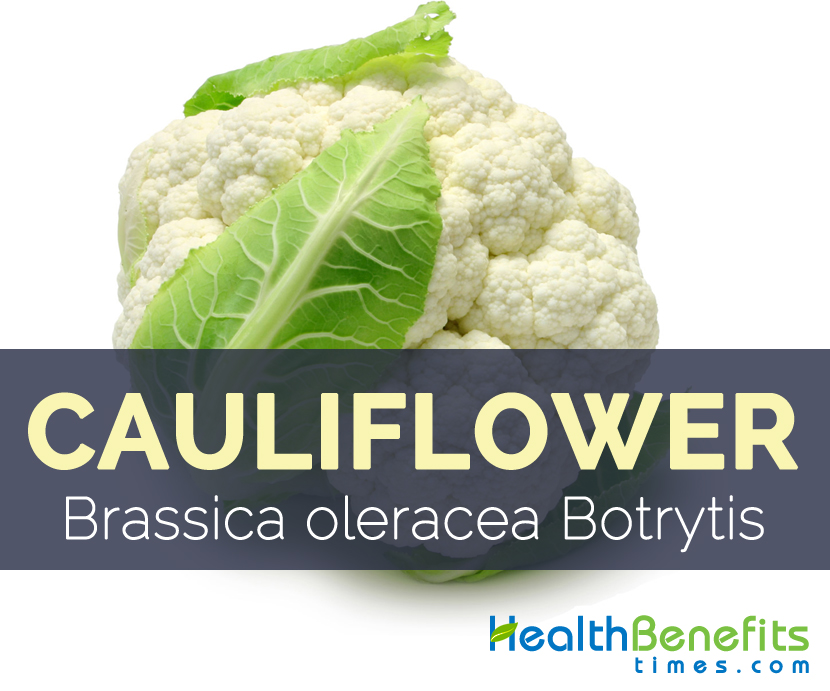 Cauliflower scientifically known as Brassica oleracea (Botrytis Group) is a cruciferous vegetable from Brassicaceae family which also includes cabbage, brussels sprouts, kale, broccoli and collard greens. According to the University of Arizona the word cauliflower comes from the Latin caulis (stalk) and floris (flower), meaning “cabbage flower”. Cauliflower originates eastern Mediterranean region. Cultivation of cauliflower started 600 years B.C. in Turkey. Cauliflower gained popularity in Europe during 16th century, while cultivation in America started at the beginning of the 20th century. Cauliflower is also commonly known as Heading Broccoli or Perennial Broccoli. Purple Cauliflower, Orange Cauliflower and Broccoflower are some popular varieties of Cauliflower.

Cauliflower is an herbaceous annual plant sized 50–80 cm and higher to 150 cm when flowering. It is found growing in cool, moist sub temperate climate and requires moist, well-drained, fertile soil with significant organic matter. Cauliflower plant have cylindrical, non-fleshy stem base. Leaves are oblong, ovate, light greenish-grey, often simple and no lateral buds developed in the leaf axils. Flower is Raceme, 40–70 cm long with 4 merous bisexual flowers with green sepals, spathulate, yellow petals. It normally blooms from May to August. Fruit is silique, 5–10 cm by 0.5 cm with 10–30 globose brown seeds.

Cauliflower consists of undeveloped white florets attached to a single stem which form a compact, cabbage-like head, generally known as Curd with a typical size of 6 to 7 inches in diameter. They are usually white to cream or yellow colored or may differed according to the grown varieties.  These flower buds are attached with the central stalk. When broken apart into individual buds, cauliflower looks like a little tree. White Head (Curd) is surrounded by long green leaves that are attached to the stem. Leaves normally protect cauliflower from sunlight and the head remains white. Stalk and the surrounding thick green leaves are also used as vegetable broth or thrown away.  Cauliflower is a nutritious vegetable which can be consumed raw, cooked or even pickled.

Cauliflower is said to have been cultivated  in the eastern Mediterranean region; from there it spreads towards central and western Europe before spreading internationally, even in hot countries where it is grown  in the cooler mountain areas above 1,000 m.

During the last 400 years, white-headed cauliflower spread from Italy to central and northern Europe, which became secondary centers of diversity for annual and biennial types.

Cauliflower is an herbaceous annual vegetable that grows in cool, moist sub temperate environments. It is a compact, flattish or globose shaped vegetable full of vitamins and minerals. Regular consumption of cauliflower is beneficial for our health as it fulfills our body’s vitamin and mineral requirements easily.

1. Reduces the risk of developing cancer

Cauliflower consists of natural ingredients which help in reducing the risk of developing hereditary cancers. Cauliflower is a cruciferous vegetable which is abundant in sulforaphane which is plays a significant role to prevent the occurrence of hereditary cancers those arising from one’s genetic makeup. (1)

Research conducted in British Journal of Cancer states that naturally occurring chemicals that are found in certain vegetables, like cauliflower and cabbage, help to improve DNA repair in cells, perhaps helping to stop them becoming cancerous.(2), (3)

Another research suggest that regular consumption of cauliflower may also help to reduce the chance of breast cancer in addition to lung, liver, colon and stomach cancers. Many studies report that consumption of cruciferous vegetables leads to the prevention of cancer growth in rats and mice throughout controlled studies, and that the same benefits apply to humans.(4)

Protective role of cruciferous vegetables as well as active components are presents in these vegetables like isothiocyanates and indole-3-carbinol. Cauliflower is also rich in glucosinolates a large group of advantageous sulfur-containing compounds. Special combinations of these compounds are the main reason for the signature smell of cruciferous vegetables like cauliflower, cabbage and sprouts when they are cooked.  Glucosinolates essentially act like natural pesticides in plant cells; when they are consumed by humans, they are utilized for DNA repair and help prevent cancer by slowing the growth of mutated cancer cells. This makes cauliflower an outstanding way to prevent cancer and also to decrease the chance of re-occurrences taking place.(5)

In case you are searching for heart supporting vegetable cauliflower is one of the best foods to include to your daily diet plan. It is an outstanding source of folic acid and vitamin B6 which are two main nutrients essential for proper metabolism of homocysteine and thus avoiding levels of this dangerous compound from rising in the bloodstream. Homocysteine can damage arterial walls and high blood levels are related with increased risk of cardiovascular disease. Cauliflower also makes a great contribution to your daily dietary fiber goals as it is an excellent source of this important nutrient.Fiber plays an important role in keeping cholesterol levels in check. Apart from that it is also full of omega-3 essential fatty acid, alpha-linolenic acid, which is helpful in reducing biomarkers of cardiovascular disease. Dietary intake of alpha-linolenic acid has also been related with reduced risk of heart disease. Cauliflower is a low-calorie source of other heart-friendly nutrients as well, including vitamin C, potassium, magnesium and niacin. (6), (7)

Vitamin C helps to protect the effects of sun exposure. It helps to reduce the damage caused by free radicals, smoke, pollution and harmful byproduct of sunlight. Free radical destroys elastin and collagen, which supports skin structure, causing wrinkles and other signs of aging.Therefore make sure that your diet include plenty of vitamin C rich foods like cauliflower that repair the damage caused due to oxidation.(8)

4. Acts as an Anti-inflammatory

Inflammation is at the heart of almost all chronic diseases that we are faced so commonly today. Cauliflower is rich in antioxidants and anti-inflammatory compounds which help to lower oxidative and fight against inflammation.

Folate (folic acid) is another B vitamin found in Cauliflower associated with inflammation. A short research in Italy recommend that even a low-dose, short-term daily folic acid supplement might reduce inflammation in people who are overweight. (9)

Cauliflower consists of considerable amount of Beta-carotene and vitamin K which are related with inflammation. Beta-carotene is a pro-vitamin which converts to vitamin A in the body that helps protect the body from free radicals. Vitamin K can help reduce inflammatory markers; research shows that it may help protect against heart disease, as well as osteoporosis. Very few of us are getting sufficient vitamin K in our diets. There are two types of vitamin K: vitamin K1, found mostly in leafy vegetables like cauliflower; and vitamin K2, which is found in liver and eggs. (10), (11)

Cauliflower consists of moderate amount of minerals which help to help reduce inflammation. Low amount of magnesium is related with high stress. Stress, as most of us know, can cause cravings for foods such as chocolate or other refined carbohydrates. Stress also changes level of dopamine in the brain, and dopamine is actually a magnesium-dependent neurotransmitter. It’s predicted that nearly half (48%) of the US population consumed less than the required amount of magnesium from food in 2005-2006, and the figure was down from 56% in 2001-2002. This is an amazing statistic because magnesium is found in a large variety of foods, including vegetable such as Cauliflower. Magnesium deficiency is common among men and women who are overweight. That many of us are not getting enough of this mineral speaks to the poor quality of nourishment that exists in many of our lives. (12), (13), (14)

According to the University of Maryland Medical Center, cauliflower is a good source of vitamin B6, which are essential for several neurotransmitters in the brain. Neurotransmitters are the chemicals that carry signals from one nerve cell to another. These chemicals are essential for processing thought and healthy brain development. They are also responsible for telling the body to make hormones that influence mood and the body’s sleep cycles.  (15), (16)

6. Reduces the risk of blood clots

Cauliflower as well as other green vegetables consists of considerable amount of Vitamin K, a fat-soluble vitamin that is most well-known for the important role it plays in blood clotting. Vitamin K activates those blood-clotting proteins simply by making a minor but vibrant chemical change in the proteins’ structure, specifically on the protein building block named glutamic acid. Daily consumption of Cauliflower can prevent blood clots. Blood clots may results in angina, arterial embolisms, heart attacks, strokes, deep vein thrombosis, renal vein thrombosis and pulmonary embolisms. (17)

Consuming green cruciferous vegetable like cauliflower helps to decreases the chance of neural tube defects, in pregnant women. Folate is essential for development of fetal and the benefits for pregnant women as well as their offspring cannot be modest. Deficiency of folate during early pregnancy may result in neural tube defects. This is a severe problem which can lead to pregnancy termination or a baby born with spina bifida. (18)

Apart from women, folate also plays an essential role in Men’s sperm to get healthy baby.  Research exploring the role of folate in spermatogenesis has linked it to sperm health and function.  Men with lower folate consumption have been revealed to have sperm with incorrect chromosomal structure.  A 2012 study reported that earlier infertile patients who took a nutritional supplement, that included folic acid, experienced substantial improvement in sperm motility and successfully achieved pregnancy with their partners. (19), (20), (21)

These results showed that daily consumption of Cauliflower benefited the defenses against neural tube defects Folic acid intake from one month before to three months after conception reduces the likelihood of neural tube defects and effective method to make sperm healthy and functional.(22)

Some of the initial research has concluded that pantothenic acid might help to decrease the sign and symptoms of rheumatoid arthritis. Research also concluded that about 2,000 mg/day calcium pantothenate improved symptoms of RA, along with morning stiffness and pain. People with rheumatoid arthritis have lower level of Vitamin B5 compared to healthy people, which may result in most severe symptoms. (23)

9. Helps to metabolize food into energy

Cauliflower consists of Vitamin B5 which helps bodies to utilize the food we consume so as to rebuild our muscles, organs and tissues. It plays an important role in digestion and nutrient extraction; digestive difficulties can be a sign of a severe vitamin B5 deficiency. And frequent use of foods high in Vitamin B’s, including B5, help keep your metabolism functioning at optimal levels.

Cauliflower is an herbaceous annual vegetable which is native to eastern Mediterranean region and is found mostly in moist, cool sub temperate environment. It is full of important nutrients so we must include it our regular diet to remain healthy, fit and active.