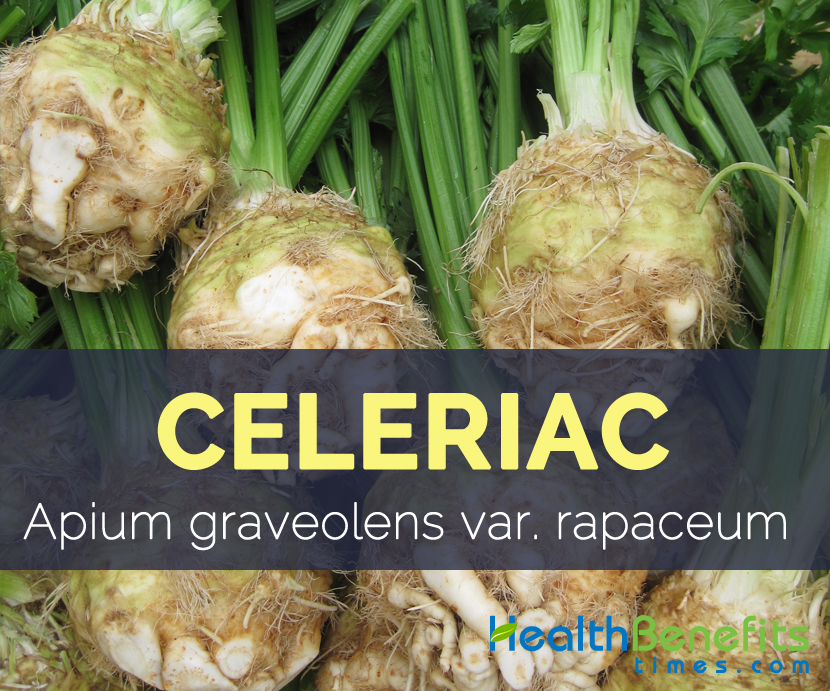 Apium graveolens var. rapaceum also known as Celeriac, Celery Root, Knob Celery, Turnip-Root Celery, Turnip-Rooted Celery is a member of celery family and is native to Italy.  It is a kind of celery, grown as a root vegetable for its large and bulbous hypocotyl rather than for its stem and leaves. Celeriac may be used raw or fresh. It is also known as Gen Qin Cai in China, Ache-Douce in France, Eppich in German, Sedano Rapa in Italy and Kornevoi Sel’derei in Russia. It is best to peel celeriac just before use, since the outer skin is tough and stringy. It is a popular winter-season root vegetable used as mashed in dishes, in soups, and stews, especially in the country-side of Eastern and North European regions.

Celeriac is a deciduous, herbaceous biennial, erect vegetable sized 1 m high and 0.5 m wide grown for its delicious, knotted underground root. It is normally found growing in temperate climatic regime, cool and moist places and prefers rich, moist and friable soil. Roots are usually large round brown 7–12 cm across. Celeriac has pinnate leaves with rhombic leaflets and hollow stalks. Flowers are creamy white, 2-3 mm in diameter and are produced in dense compound umbels. Seeds are broad ovoid to globose, 1.5–2 mm long and wide.

As mentioned earlier celeriac are normally grown for its delightful, knotted underground root. It is a well-known winter season root vegetable mainly used in soups, stews or even consumed raw. Roots are big, swollen, knotted, and rounded to odd shape, nearly 7–12 cm across. It has brown, rough skin that is thick and spotted and covers creamy white flesh which is extremely delicious, crispy and firm. It features nutty, earthy, sweet, subtle celery flavor while taste is bit like celery and parsley. Apart from its delightful taste it is full of essential minerals, vitamins and nutrients which are essential to live healthy and happy life.

Swiss and Italian botanists first termed celeriac root during 1600s. It was found growing wild in the Mediterranean and in northern Europe and was used as a medicine for numerous health problems. In the 19th century it was introduced in the United States and it is now cultivated around the world including in North Africa, South-West Asia and Siberia. It is mostly cultivated in Central and Eastern Europe and the Netherlands. 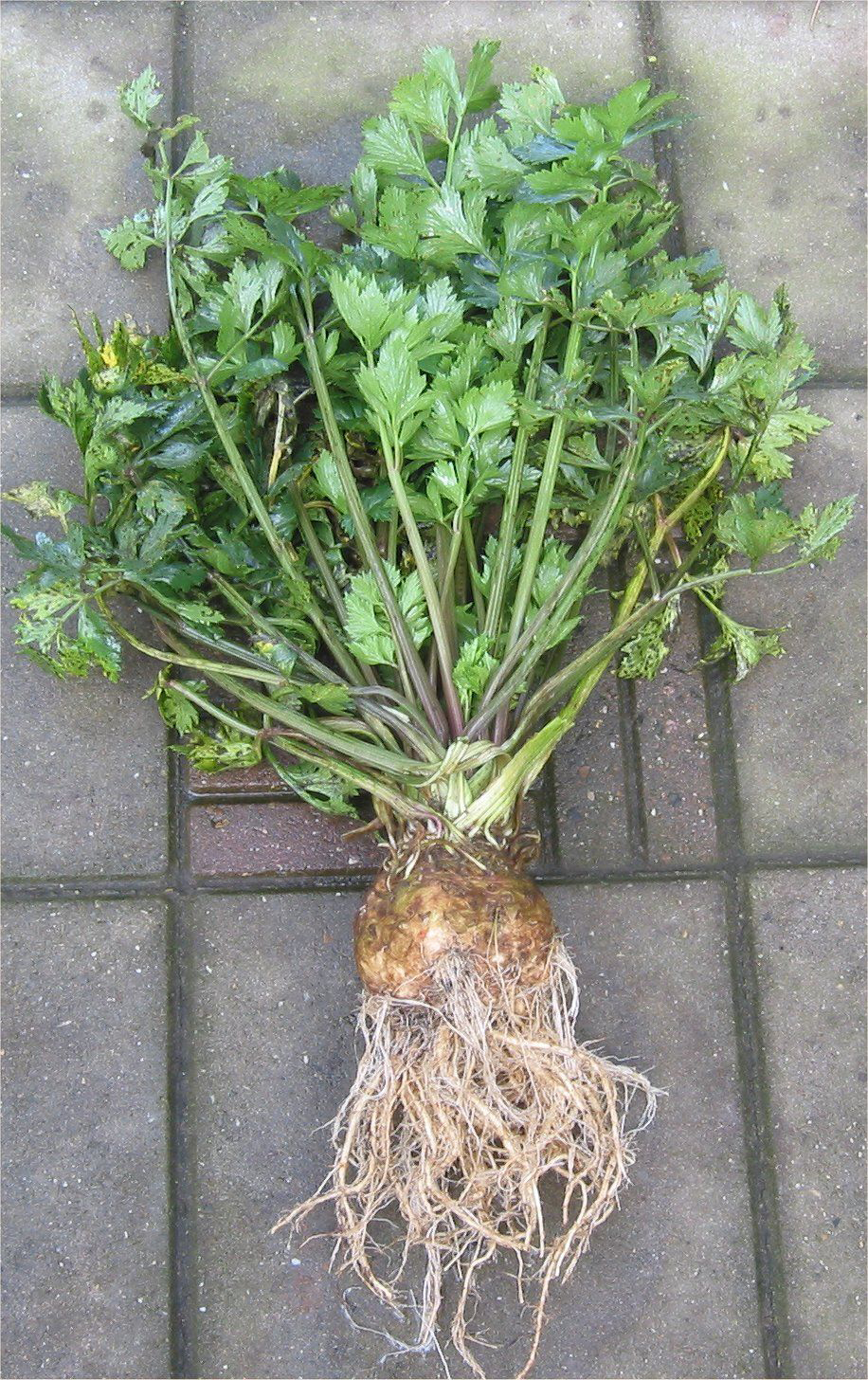 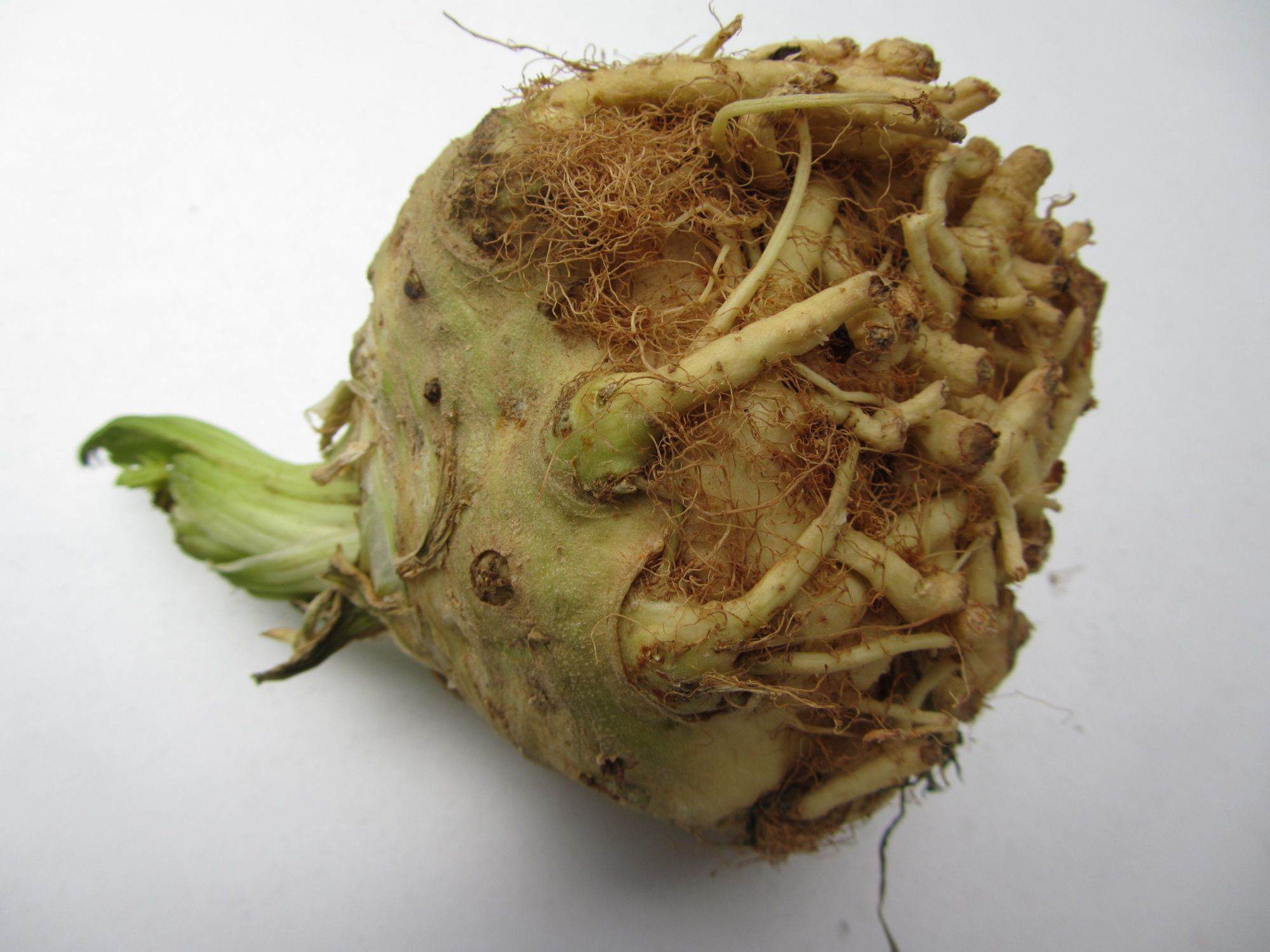 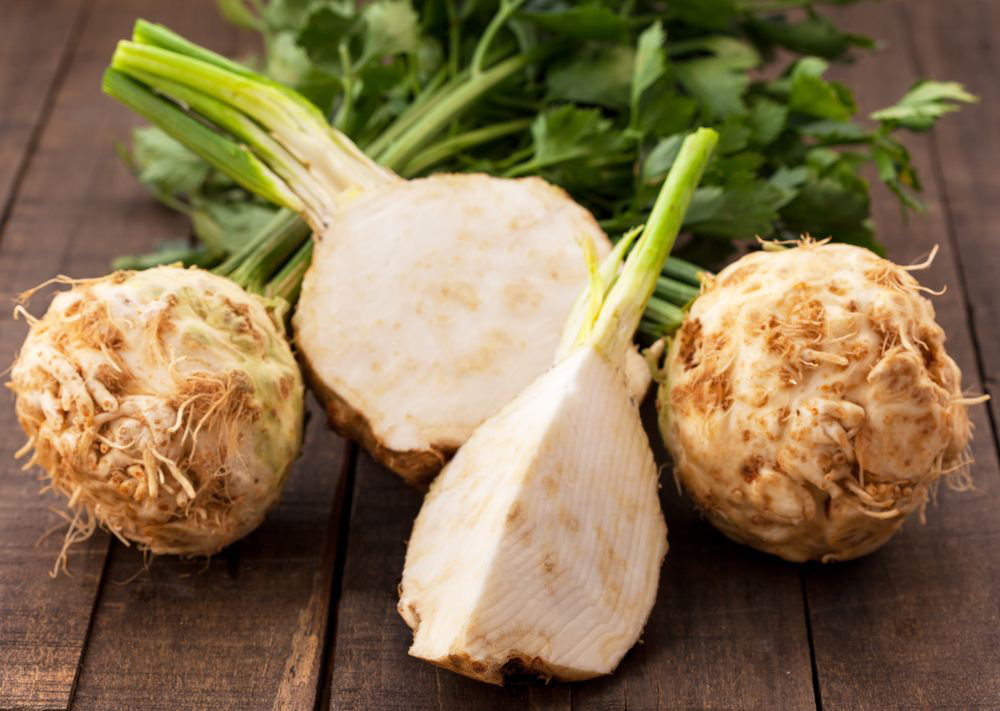 Celeriac is an herbaceous biennial vegetable which can be found growing in cool and moist place. It is a popular root vegetable for its big and bulbous hypocotyl which has taste similar to celery and parsley, normally one single hypocotyl weights 1-2 pound. Due to its distinctive taste it is found used in several dishes, soups, and stews as well as consumed raw.

Celeriac is one of the best suppliers of essential Vitamin K, with over 53% of your daily value in every half cup (64 µg). Adequate amount of vitamin K is essential to activate the Gal-protein osteocalcin, which binds firmly to bone minerals to make robust bones. With insufficient vitamin K, bones cannot hold on to vital calcium that results to osteoporosis. To make matters worse, the calcium has to go somewhere, so it enters the bloodstream, where it contributes to stiffening arteries. Luckily, celeriac provides a high dose of essential Vitamin K that can be an effective means of protecting your bones from osteoporosis. (1)

Besides Vitamin K celeriac also consists of bone friendly minerals like calcium and phosphorus which are essential for maintaining bone strength and structure. In fact, more than half of all bone is made from phosphate. Manganese helps with the formation of bone regulatory hormones and enzymes involved in bone metabolism, phosphors helps form bone mineral density which avoids bone fractures, breaks and osteoporosis – which all are more probable as someone ages. Without sufficient phosphorus, calcium alone cannot effectively build and maintain the bone health. More calcium alone cannot increase bone density, since both minerals are required to form bone mass.156 grams of Celeriac consists of 25% phosphorus, 10% Manganese and 6% Calcium of the recommended dietary allowance which are balanced to maintain strong bones. According to research, taking manganese along with other bone-supporting nutrients like calcium, zinc, magnesium and copper can improve bone mass in women along with weak bones, which is beneficial to naturally treat osteoporosis. (2), (3)

Vitamin B6 also known as Pyridoxine is a powerful vitamin, and there is a lot of it available in Celeriac. One serving offers 20% of your daily supply of Vitamin B6, which helps in the manufacture of neurotransmitters, the chemicals that allow brain and nerve cells to communicate with one another, confirming that metabolic processes such as fat and protein metabolism run effortlessly, and is significant for immune system function in older persons. It can also help deal with conditions, like nerve compression injuries (like carpal tunnel syndrome), some cases of depression and arthritis and premenstrual syndrome (PMS).

Increased homocysteine levels might accelerate dopaminergic cell death in Parkinson’s disease through neurotoxic effects; therefore, increasing intake of B vitamins involved within the managements of homocysteine metabolism may decrease the risk of PD through declining plasma homocysteine. Research concluded that sufficient intake of vitamin B6 was related with reduced chance of Parkinson’s disease. (4) Celeriac contain 14% of daily require value of Vitamin B6.

Celeriac consists of vitamin K, numerous antioxidants like vitamin C, vitamin E, Selenium Lutein and Zeaxanthin, and small quantities of omega-3 fatty acids. All these vitamins, antioxidants and omega-3s work together to keep arteries clear of hazardous plague buildup, to lower cholesterol levels, to combat high blood pressure, to increase blood flow and to sustain healthy, strong blood vessels. Such important benefits decrease the chance of heart attack as well as other cardiovascular problems that affect millions of people every year.

Vitamin C found in Celeriac is essential for synthesis of collagen and the development of new blood vessels to substitute damaged tissue. This element also has a strong autoxidizing effect that boosts the immune system and protects against wound infection. Inflammatory responses frequently increase free radicals at the site of injury and the presence of vitamin C might limit free radical damage, free radicals may create difficulty in the wound healing process. Another perk is that vitamin C helps the body better absorb iron, which works to supply the wound bed with oxygen and energy for more efficient cellular development. (5)

Fiber is an essential part of the diet and is connected with better digestive health. Celeriac is a good source of both soluble and insoluble fiber. Soluble fiber forms a gel-like substance in the gut. It is a respected source of nutrients for the beneficial digestive bacteria, and may also decrease spikes in blood sugar and control cholesterol levels. Insoluble fiber adds bulk to fecal matter and may help food and waste pass through the gut. Consuming insoluble fiber has also been related with a decreased risk of diabetes. Most of the dietary fiber is present in fruit peel of Apple. Though must eat apple with skin go get benefits from dietary fiber. (6)

Iron found adequately in Celeriac is one of the most important mineral which is extremely useful in fighting with Anemia simply by helping to adequate manufacture of Red blood cells and hemoglobin, therefore high oxygen supply throughout the body cells. Similarly iron also helps with metabolic enzyme processes that body carries to digest protein as well as absorbs nutrients from foods. Iron deficiency normally results in mood changes, low concentration and trouble with muscle coordination. Iron is required for muscle movements because it helps to store oxygen in muscles which helps them to move as well as strengthen. (7)

Apart from that Iron is equally important for supporting brain functions because it transports oxygen towards the brain, in fact about 20% of the oxygen in body is used by brain. Due to this fact, an iron deficiency may results in weaken memory as well as other mental functions, Iron deficiency may result  in psychomotor and cognitive abnormalities in infants and young children which have the possibility to result in learning difficulties. (8)

Celeriac is a high source of Copper and potassium, two minerals which are significant in preventing the arthritis. Copper has anti-inflammatory capabilities which help to relieve pain and rigorousness related with arthritis. It also has the capability to help with muscular strength, to reduce joint pain, and to repair connective tissue. Potassium is an important mineral and electrolyte responsible for the function of all cells, tissues and organs in your body. It is crucial in both skeletal and smooth muscle contractions. Potassium can be acquired through a healthy diet and is found in vegetables like celeriac. Potassium also plays important role to balance proper amount of sodium and magnesium in the body. (9)

Arthritis sufferers even choose to wear copper bracelets or bands because it is supposed that copper is absorbed by skin and can help minimize painful symptoms. (10) Apart from that certain topical applications made up of potassium have shown some promise as anti-inflammatory agents. One current research mixed potassium with a topical rub and is applied to the joint, with the patient reporting reduced pain.

Celeriac consists of important pro Vitamin B5 which is also called Pantothenic acid which acts as moisturizer and helps to keep skin healthy, soft and smooth. It also acts as anti-inflammatories simply by encouraging your skin’s healing processes. It is very hydrating and helps to keep skin moist simply by absorbing moisture from air.  Celeriac consists of reasonable amount of Vitamin B5 (nearly 0.549 mg per cup). It is a water soluble vitamin that cannot be stored in the body therefore celeriac root must be included in your regular diet. (11), (12)

Celeriac is a well-known root vegetable which is native to Italy and is extremely popular nowadays due to its important vitamins, minerals and essential nutrients. It is cultivated worldwide due to its benefits.