Trending
You are at:Home»Herbs and Spices»Health benefits of Century plant 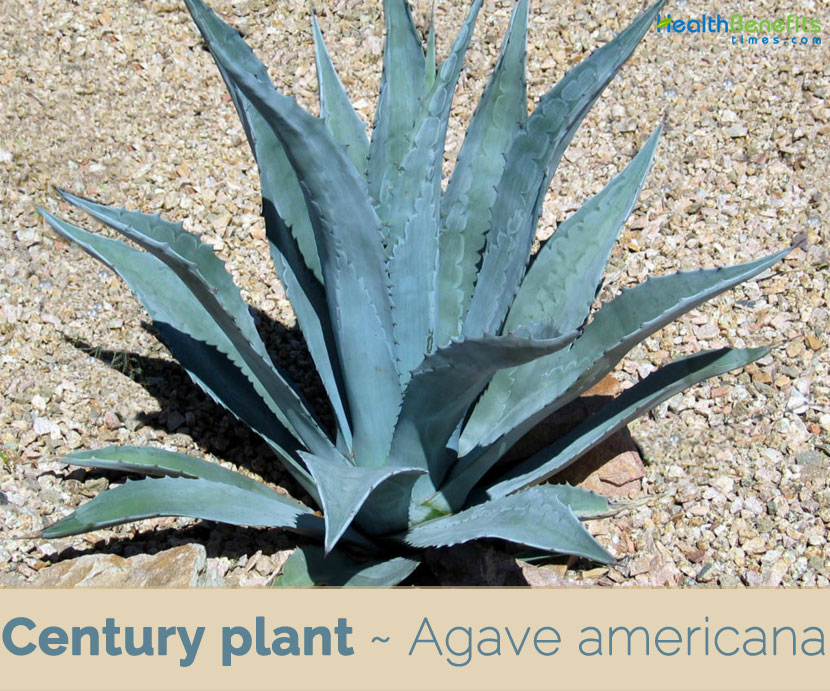 Agave Americana, commonly known as sentry plant or century plant is a species of flowering plant in the family Asparagaceae. The plant is native to Mexico, and the United States in New Mexico, Arizona and Texas. Today, it is cultivated worldwide as an ornamental plant.  It has become naturalized in many regions, including the West Indies, parts of South America, the southern Mediterranean Basin, and parts of Africa, India, China, Thailand, and Australia. Despite the common name “American aloe”, it is not closely related to plants in the genus Aloe. Century plant, American agave, American century plant, maguey, flowering aloe, American aloe, metl, spiked aloe, sentry plant, Blue Sisal, malina, Agave and yucca are some of the popular common names of the plant. Although it is called the century plant, it typically lives only 10 to 30 years.

The genus name Agave is derived from the Greek word agauos, meaning admirable or noble in probable reference to the very tall flower spikes found on the plants of many species of Agave. The species name Americana, means ‘of America’, referring to its American origin. Common name of century plant suggests the plant will live 100 years before flowering. In reality, outdoor plants typically bloom between the 10th and 25th years. Indoor plants rarely flower. It is grown for many reasons- ornamental, medicinal and agricultural. In South Australia Agave Americana mainly invades disturbed sites, road sides and coastal vegetation.

Large leaves at the base of the plant are long and narrow (lanceolate) and arranged in a rosette. They may be erect or ascending or spreading in nature, and are sometimes bent backwards near their tips. These leaves are 1-2 m long and 15-25 cm wide and are usually rigid and somewhat fleshy (succulent). They are normally bluish-grey (glaucous) to greyish-green in color, but forms with variegated leaves are relatively common. The leaf margins coarsely toothed (serrate), with prickly teeth (up to 1 cm long) borne at intervals of 2-6 cm. The leaves have a pointed tip (acute apex) topped with a large dark-brown colored spine that is 1.5-6 cm long. Leaves have stomata which open at night, taking in carbon dioxide.

The massive flower clusters (1-8 m long) are borne at the top of a very robust flowering stem. These flower clusters are much-branched, with the branches being further divided towards their tips. Individual flowers are borne in an upright (erect) position on stalks (pedicels) 2-4 cm long. These flowers are 7-10.5 cm long and are yellow or greenish-yellow in color with their six ‘petals’ being fused together at the base into a short tube about 8-20 mm long. The flowers also have six very prominent stamens, consisting of stalks (filaments) 6-10 cm long and yellow anthers about 2.5-3.5 cm long. They also have a large ovary (3-4.5 cm long) topped with a style and three stigmas. Flowering normally takes place from March to June.

Fertile flowers are followed by large oblong capsule that are about 3.5-8 cm long with a pointed tip (beaked apex) and consists of three compartments. These capsules turn from green to brown or blackish in color as they mature and eventually split open to release their seeds. The seeds are 6-8 mm long and are black in color and shiny in appearance. After flowering, the mature plants die. 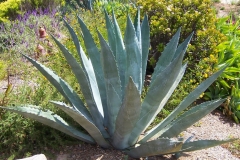 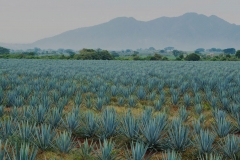 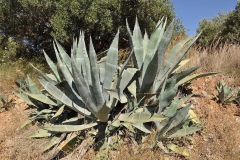 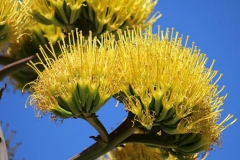 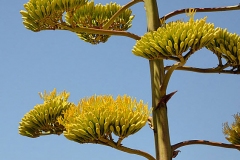 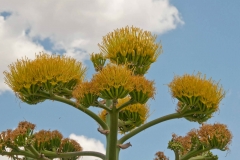 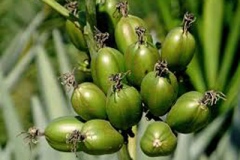 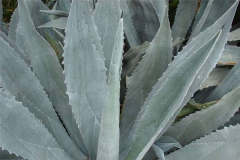 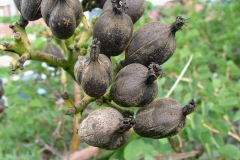 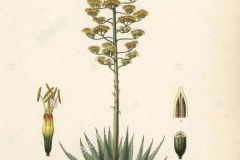 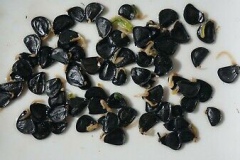 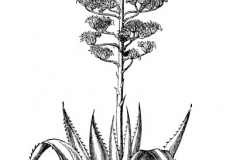 Century plants are rich in minerals like calcium, iron, and zinc. Minerals are very important for our health. It also consists of saponin which works great against cholesterol. And the use of agave nectar in the place of sugar is highly recommended by the doctors. Because it doesn’t help the sugar level goes high. Besides all these, Century plant has the following medicinal benefits.

Agave Americana is also known as American Aloe due to its topical applications on the wounds. Research concluded that applying Century plant extract on minor wounds and burns helps in healing them. The extract was collected from agave leaves using the percolation method.

Century plant can also be used to hydrate hair. Mix one tablespoon of agave nectar with any hair mask or add it to your conditioner. It’ll provide shine and strength to your hair and prevent hair loss and work on split ends too.

Century plant’s nectar consists of glycolic acid and essential antioxidants. It absorbs in the skin quickly and makes it look younger and less oily. It also works on controlling acne and reduces the inflammation of the skin as well.

Century plant consists of prebiotic fibers which help our body nurture good bacteria. The presences of these bacteria eventually results in proper digestion.

Century plant leaves are supposed to be effective to cure dysentery. Before eating agaves, make sure that it is washed very well. And watch out the thorns.

Century plant is fibrous. These fibers have some elements that fight against gastric pain. It decreases the gas formation in stomach according to gastrological research.

9. Jaundice (Excessive Bilirubin in the Blood)

Jaundice is not a fatal disease, but it can make your life worse. Chemical in Century plant is good for liver functions. Take 2 ml sap of Century plant with lukewarm water once a day to cure jaundice.

The anti-inflammatory quality of Century plant is extensively known for excellent efficacy. Put some Century plant sap on the bruises and rub that evenly to help the skin heal.

Hair loss is one of the global health issues at present. You can use agave plants to nourish the hair just like Aloe Vera.

The saponins present in Century plant leaves can hinder the growth of cancer cells. Well! It can’t cure cancer, but it can earn a place in the list of cancer patients’ diet.

Pregnant women often face a problem with labor. They try to induce labor, but it becomes a tough job to accomplish. Century plant can help her in promoting labor.

Drinking Pulque is a Mexican way to increase the milk supply for breastfeeding. This beverage helps the women increase milk production.

If you have the ability of tasting traditional food, this will certainly intrigue you, because Native Americans had a tradition of roasting agave leaves in pits though it takes a couple of days to complete the process. People used to grind it to a powdery form and store it for years. This was of great use when there was a shortage of food. But, in modern time, agave is mostly known as an element of the production of tequila. It is more important use is being used as a replacement of sugar. Agave nectar is extracted from the pineapple-like pina/fruit of the agave plants. This is a natural sweeter which does not affect the sugar level of the human body. It is gluten free comprising a low glycemic index. So, it is good for health. Before using it as a sweetener, keep in mind that it is sweeter than regular sugar. So, you have to control the amount as per the need.

Century plant leaf works as a naturally attached needle and thread. But the thread must be extracted with great care. Otherwise, the whole thing will turn into a complete mess. Remove the terminal thorn carefully. There will be complete fibers of a few feet. Pound the leaves slowly until the leaf flesh is fully removed. Then you will get the natural sewing kit made from agave plants. Use the fiber as thread and the thorn as needle and fix the things you want to patch up. Watch out the sharp thorns. They might find you off-guard and injure you. So use the agave plants in sewing and make a difference in your DIY sewing projects.

Native Mexican has a tradition of making rope, paper, and firewood from agave plants. At first, the leaves are burnt or boiled. The burning process continues until it becomes charred. Then exclude everything from the remaining part except fibers. The remaining fibers can be mold into the shape of a rope. Though agave-made papers will not be of high quality, it is quite easy to make this. Peel the leaves and let them dry completely. This is a convenient way. The wastage produced from tequila preparation can also be turned into paper. Make a pulp using the fiber of the wastage and compress it to make paper. Stalk of the flowers is handy if we can use them as firewood. They are a good burning element if dry completely.

Agave plants find their ways even in the desert area that made them adaptable to adverse hot climate. If your home situated somewhere hot with less water, they can be your best friends. Such weather damages the green plant, and your home may look pale without any green around it. Adopt some agave plants and put them in suitable pots or containers. It is a great landscaping choice for people living in dry places. Besides, you can use them to adorn your office too.

Agave plants have great use as an element of tattoo preparation procedure. Agaves were extensively known to be related with tattoos. Thorns are fierce enough to be used as the needles.  And don’t worry about the ink. Fleshy leaves are burnt and charred to make ink. So, you can use these natural needles and charcoal for designing tattoos. And, of course, natural materials are better than chemicals.

Small infestations of A. Americana can be controlled by digging out small plants manually. Large plants can be moved by machinery. Care should be taken to dig out the taproot to prevent spread by suckering, and all pieces need to be disposed of properly.

Large infestations of A. americana can be controlled by cutting down leaves close to the ground and painting the stump immediately with herbicide such as glyphosate and picloram + 2,4-D. Follow up treatment may be necessary, especially for larger plants.