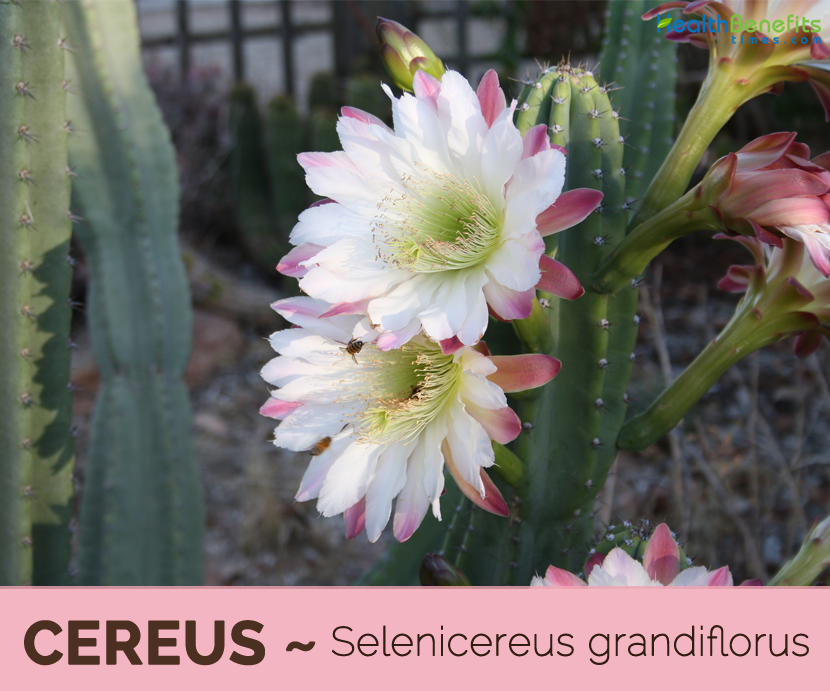 Night Blooming Cereus (Selenicereus grandiflorus) is an exquisite flowering plant which is considered to be nocturnal since it opens in the evening and closes at dawn. It is a plant species of the family Cactaceae and it is commonly known as princess of the night, Honolulu queen, Christ in the Manger, Dama de Noche, queen of the night, sweet-scented cactus, large-flowered cactus, vanilla cactus, large blooming cereus, large-flowered torch thistle, lunar flower and organillo. The plant is native to the desert and semi-desert regions of the Antilles, tropical America, Mexico, and the southern United State. It is described as a creeping shrub with cylindrical stems with prickly spines. Its flowers are very large and emit a vanilla like perfume in the evening hours. The flowers of the Night Blooming Cereus Stem last only for 6 hours and do not bloom again when withered. The name Night Blooming Cereus or Selenicereus is derived from the Greek word selene and Cereus which means moon.

The plant consists of fragrant trumpet-shaped flowers that are up to 4 inches wide and as much as 8 inches long. The outer petals of the flower are brown, orange or lemon yellow; the inner petals are white, oblanceolate, with an acute apex. The areoles of the ovary and flower tube bear long hair like spines. The waxy, creamy-white, many-petaled flowers are followed by an ovate, covered with scaly tubercles, fleshy, short-spined elliptical fruit about three inches long. The fruit consists of many small seeds that are acidic in nature. Night blooming Cereus will not begin to flower until it is four or five years old and will begin with just a couple of flowers. The Night Blooming Cereus Stem should be collected in July when the plant is fresh. A tincture from the Night Blooming Cereus Stem is considered to be a homeopathic treatment for many health problems.

Traditional uses and benefits of Cereus