Trending
You are at:Home»Herbs and Spices»Health benefits of German Chamomile 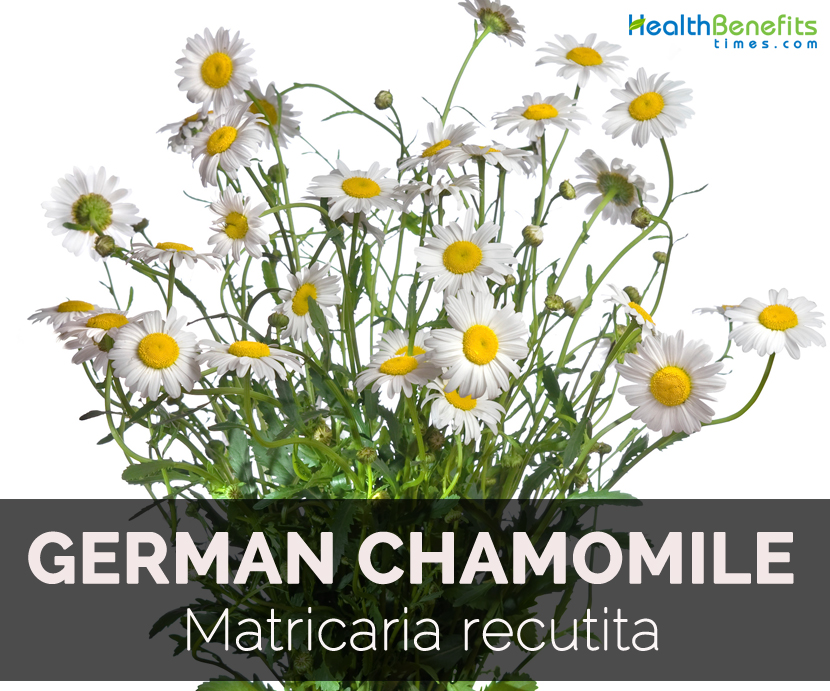 Matricaria recutita (Wild Chamomile, False chamomile, German Mayweed, Sweet Feverfew, True chamomile, Hungarian Chamomile or Single Chamomile) is the plant which is about  2.3 to 23.5 inches tall that has got furrowed and heavily branched stems, belonging to the family Asteraceae and genus Matricaria L. Probably German Chamomile is native to Europe and Northwest Asia. This plant possesses thin and long stems with tiny flowers that resembles daisy. It is widely naturalized in North America, Australia and South America. This plant is used to extract oil by steam distillation or solvent extraction of golden to yellow flowers alike Roman chamomile. This herbal medicine is useful for treating irritable bowel syndrome, sore stomach and aids sleep. It is used to treat stuffy nose, travel sickness, nervous diarrhea, hay fever, intestinal gas, fibromyalgia, nervous diarrhea, trouble in sleeping and restlessness. It helps to lower swelling and enhance relaxation.

German Chamomile is an erect, ascending or glabrous herb that measures about 20-40 cm high. It has got glabrous and erect stem that bears fragrant, showy flowers that are white with yellow center. The flower head measures about 3/4 inch broad. Leaves are oblong with narrow thorny tip, (1.5-) 2.5 – 6 (-7) cm long and 2 cm wide. This plant bears flower during mid-spring.

Chamomile is widely known to the Western world, with its two known varieties such as Roman chamomile and German Chamomile. Though they refers different species both are used for treating the same health ailments such as stomach problems, calms frayed nerves, skin problems, muscle spasms and infections. It has been used for thousands of years for medicinal purposes that date back to ancient Egyptians, Greeks and Romans.

German chamomile is used to provide relief from sleeping problems and anxiety. The clinical trial made on the treatment of anxiety in people shows that the capsules made from German chamomile helps to lower the anxiety symptoms in the people having mild to moderate generalized anxiety disorder. The animal studies shows that the high dose assist sleep whereas low doses is used to  provide relief from anxiety.

Traditionally, German chamomile is used to cure irritable bowel syndrome, stomach cramps, diarrhea, indigestion, colic and gas. It soothes as well as relaxes contractions of muscles. No human studies have been made for these conditions. The studies shows that the combination of peppermint, iberis and chamomile is used to provide relief from indigestion symptoms.

German chamomile is used to treat mouth problems but no evidence has been provided. It is used as a mouthwash for the prevention of mouth sores.

German chamomile is used in ointment or cream for soothing irritated skin but no studies have been made with people. The studies have shown that the Chamomile cream provides relief from eczema symptoms.