Trending
You are at:Home»Herbs and Spices»Health benefits of Blue Cohosh 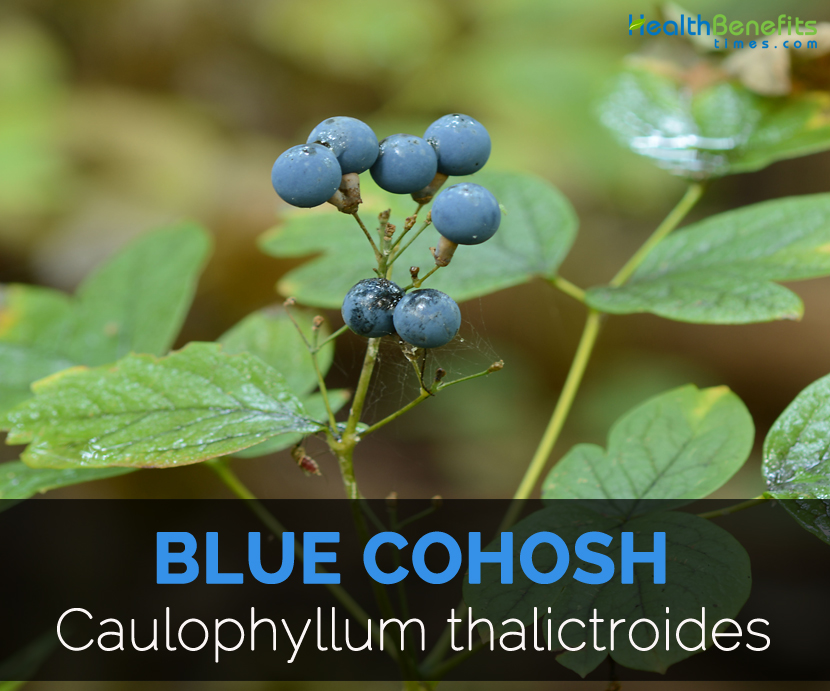 The flowering plant Blue Cohosh belongs to the family Berberidaceae and species Caulophyllum. Other common names for Blue Cohosh are Caulophylle faux-pigamon, papoose-root, squaw-root, blue ginseng and yellow ginseng. This herb contains a stalk that possesses three branched leaves with various fruiting stalks. The base of leaflets resembles tulips and has distinct serrate flower tip. It bears fruits as berries that resemble blueberries due to the presence of bluish green foliage. The blossoms start to begin in early spring. It is commonly found in northern Illinois, central Illinois and Shawnee Hills of southern Illinois. It is uncommon in other areas of southern Illinois. Its habitats are bluffs, rich mesic woodlands and wooded slopes of large ravines. It is also found in hardwood forests of the United States. Firstly the root of Blue Cohosh is used by American Indians and later it was introduced in Native American tribes. It is usually known by renowned herbalists for its abortive and contraceptive properties. This herb is used by Native Americans to start labor or increase contractions. It could be used as a tincture or in the form of capsule or tea. This herbal plant is used to stimulate the function of uterus and promotes pain for the expecting mothers. It is used to promote delay menstruation and soothes painful muscle spasms.

Blue cohosh is a perennial wildflower which grows about 1-3′ high. It has rhizomatous and fibrous root system. It has light green to pale purple central stem that is terete, erect, glabrous which is often glaucous.

Each flower measures 1/3″ across that comprises of insignificant petals, 6 petaloid sepals, 6 stamens with an ovoid ovary. The sepals are oblanceolate which might be greenish brown, greenish yellow or greenish purple that depends on local ecotype. From 3 to 4 green bractlets could be found underneath of each flower. The flower blooms from mid to late spring before the leaves are developed fully. Then the flowers are followed by the berry that is like seeds.

Seeds are globoid in shape, glacous and glabrous that measures about 1/3″ across. Firslty, the seeds are green but later on turns bright blue when it becomes mature. The seed coat consists of carbohydrates and is fleshy.