Trending
You are at:Home»Herbs and Spices»Health benefits of Greater Celandine 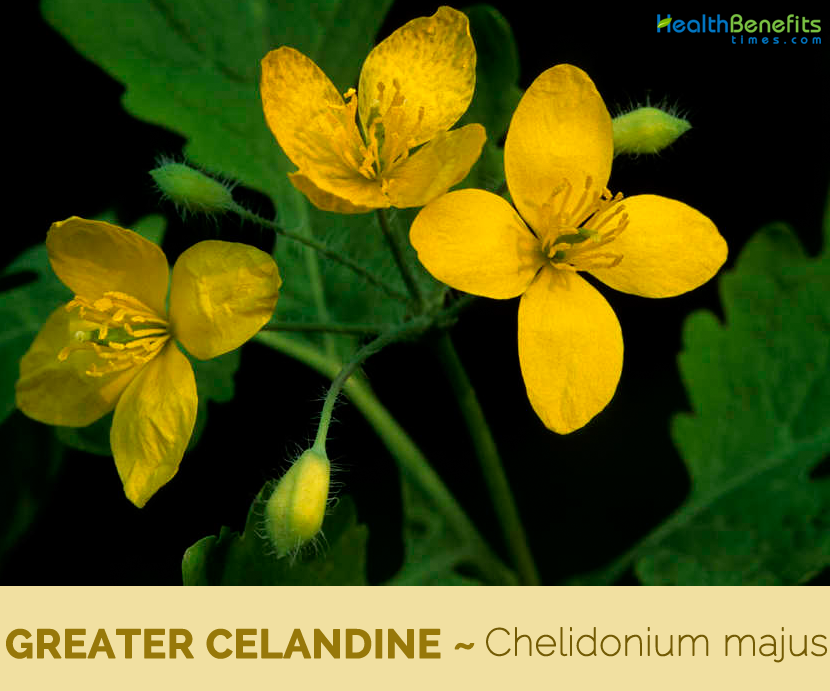 Greater celandine belongs to the poppy family while the lesser celandine belongs to the buttercup family. Genus name comes from the Greek word chelidon meaning a swallow as it flowered when the swallows arrived. Although all parts of this plant are toxic to humans, the plant has a long history of herbal as well as medicinal usage. It was once supposed to be an effective remedy for wart removal, resulting in the acquisition of common names such as wartweed and swallowwart.

Greater Celandine is an herbaceous perennial plant growing about 30 to 120 cm tall. The plant is found growing in rubble, damp ground, banks, hedgerows, waste places, thickets, roadsides, dry woods and nearly always close to human habitations. The plant prefers a rich soil of a woodland nature and succeeds in any soil other than boggy conditions. The plant has thick and fleshy roots along with weak, slender, round and slightly hairy stem that grows from 1 1/2 to 3 feet high and is much branched; at the points where the branches are given off.

Leaves are alternate, deeply lobed and pinnately-divided with lobed and wavy-edged margins, up to 30 cm long. When injured, the plant exudes a yellow to orange latex. This juice stains the hands strongly and has a persistent and nauseous taste and a strong, disagreeable smell.

Greater celandine has been used for centuries to treat a variety of health conditions. Today, it is still used to deal with an impressive number of complaints. Listed below are some of the popular health benefits of using greater Celandine

However, it should be stated here that the studies have come under criticism because of their poor design. While the results have been promising, until more rigorous testing is conducted, we will not know for sure how effective the plant may be against cancer.

Due to its depurative properties, Greater celandine can be used to purify and cleanse the liver. It can be used as an effective part of a detoxification program because of its ability to eliminate waste and toxins out of the system. It has natural liver protective properties which not only help to support proper liver health and function but also protect the liver from cellular damage.

It may also help to encourage the gallbladder and keep the organ working properly. Problems with the gallbladder are known to cause numerous other issues like indigestion. Greater celandine is known to help stimulate the production and the flow of pancreatic enzymes and bile which in turn helps prevent inflammation, infection and diseases like hepatitis.

3. For Anxiety and Sleeping Problems

Greater celandine can be used as a mild sedative and anti-anxiety treatment. It has narcotic properties and thus should not be taken in large doses. In smaller doses, it can be used to ease anxiety and tension and because of its analgesic ability, might help relieve pain. A combination of these properties means that it may be suitable for people having trouble sleeping.

Greater celandine is useful when it comes to treating digestive issues that result in cramping, bloating or feelings of nausea. This herbal extract can help relieve cramping and ease indigestion. It helps the body to produce more bile and other digestive enzymes responsible for effective digestion and can even be used to naturally deal with stomach ulcers.

While there is no scientific proof to back it up, there is plenty of anecdotal evidence accessible to suggest that greater celandine can be used to deal with irritable bowel syndrome and other chronic inflammatory conditions of the stomach.

When used topically, greater celandine is a wonderful microbe zapper. This is exactly why the herb is used traditionally for disinfecting minor wounds and burns for so many years now. Killing off bacteria in the presence of a break in the skin is important for keeping an infection from striking.

Topical use of greater celandine can help to eliminate warts, which are caused by the human papillomavirus or HPV. The herb has antiviral properties, too! Traditional healers also use greater celandine for the treatment of various chronic skin conditions like eczema and psoriasis.

Traditionally, herbalists and naturopathic doctors have used herbs in the form of tinctures, or alcohol extracts. Chelidonium administered by mouth as a tincture has demonstrated immune-boosting properties in children with chronic tonsillitis. However, occasional reports of liver toxicity from Chelidonium are a concern. Additional research into the safety and efficacy of this herb are needed.

Juice of the plant has been used traditionally to treat a range of skin conditions and recent preliminary research has confirmed that it may well be effective against atopic dermatitis. They concluded that the plant had the potential to treat atopic dermatitis however it is not known whether the herb would have a similar effect on humans.

Chelidonium is often used for aching shoulders, along with chilliness in muscles and the tips of the fingers that ache when touched. In some cases, shoulder pain may have a relation to nausea, vomiting, and sweating. It is also used for right shoulder, wrist, arm, neck, and inner shoulder blade pain. The remedy will both treat and cure all symptoms related to shoulder pain.

Chelidonium is a powerful homeopathic remedy for headaches. In this case, the person will experience numbness of the face, heaviness on the right side of the head, and neuralgia, particularly in the area above the eyes. The person will also often have a yellow coating on their tongue that also has teeth marks.

It is also worthy to note that the person’s symptoms may be related to an existing liver condition. Symptoms will improve from putting pressure on the affected area and bending backwards.

Chelidonium is often used for pneumonia when the person experiences breathlessness and pain when breathing deeply or coughing—common features of pneumonia. Pneumonia will mainly affect the right lung, and the condition may also be accompanied with liver disorders. Other pneumonia symptoms include teeth-chattering chills, diarrhea, vomiting, nausea, a rapid heartbeat, chest pain, fever, and tiredness.