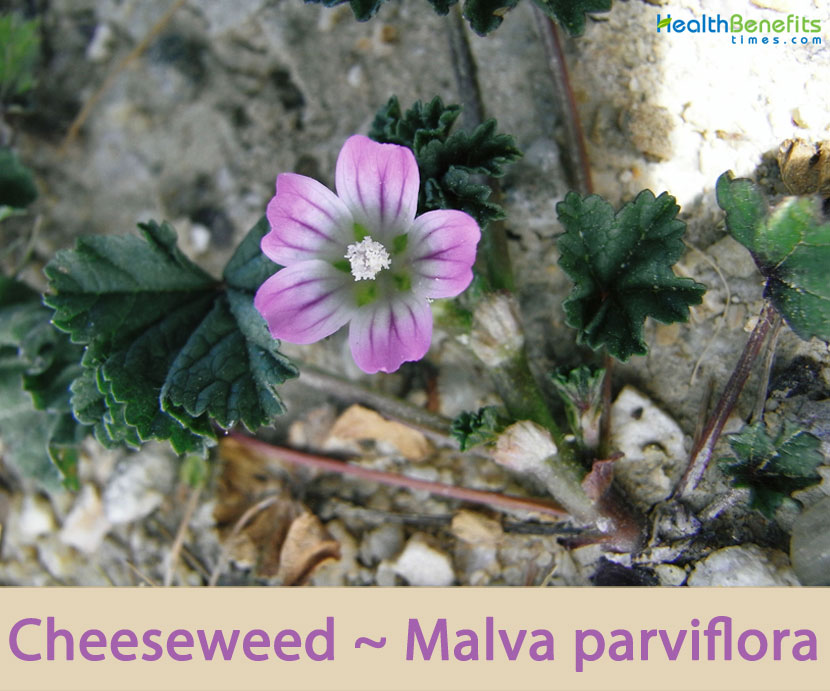 Cheeseweed or Least Mallow scientifically known as Malva parviflora is an annual or perennial herb belonging to Malvaceae (Mallow family). The plant is native to Europe, western and central Asia and northern Africa, and introduced widely through cultivation. It regularly escapes cultivation in North America, but is rarely encountered in New England, where it has been collected only in Vermont. Common names include Egyptian mallow, Least Mallow, Small-flowered mallow, Cheeseweed, Cheeseweed mallow, little mallow, Ring-leaf mallow, Small-flower mallow, Small-whorl mallow, Whorl-flower mallow, whorled mallow, Alkali mallow, Country mallow, Small whorled cheeseweed, Small-whorled mallow, Small mallow and pink Cheeseweed. The plant is harvested from the wild for local use as a food and medicine.

Cheeseweed is a prostrate to erect, annual or short-lived perennial herb that normally growing up to 50 cm high that is covered with rather stiff star-like (stellate) hairs and is woody at the base. The plant is found growing in fields, waste land, waste places, in sheep yards, around farm buildings, closed yards, watercourses, roadsides, forest edge, ditches, other disturbed open areas, grasslands, woodland, on heavily grazed grassland, on stony hills and at edges of ponds and lakes. The plant normally occurs on all soil types. The stems are covered with stiff star-like (stellate) hairs and can be erect or ascending (at first spreading horizontally and then becoming erect) and rather fibrous.

The leaves are circular and 8-10 cm in diameter. The base of the leaf is cordate (heart shaped with a notch at the base), margins are crenate (a margin with shallow, rounded teeth) and it is sparsely pubescent (with a covering of short, weak, soft hairs). The leaves are palmately veined with 5-7 short triangular lobes. The petiole (leaf stalk) is mostly 1.5-12 cm long and rarely 20 cm.

The flowers have 5 petals that are about 4-6 mm long, white or pink in color, and twisted in the bud. The stamens are numerous with filaments fused in a column surrounding the branched style. There are as many branches of the styles as carpels. Malva parviflora has 8-12 carpels. The pedicel (flower stalk) is generally less than 1cm in length at maturity. Outer sepals are linear, 3-4 mm long. Sepal cup is 5-6 mm long, flat in fruit, and 7-9 mm long, fused slightly above the middle. Sepals are triangular, pointed or long-pointed. Petals are as long as or slightly longer than the sepals, white, sometimes with pinkish tips. Flowering normally takes place in between March-August

Fertile flowers are followed by schizocarp (a dry fruit which splits into individual carpels). It is 7-8 mm in diameter and separates into 8-12, 1 seeded mericarps. The schizocarp is disc-shaped surrounded by the calyx (sepals of the flower) and are brown when ripe. The sectioned fruit (schizocarp) looks like a sliced wheel of cheese, hence the common name of cheeseweed mallow.

Seed is rounded comma-shaped in outline, prominently notched along margin where hilum occurs, compressed (thickened along the margin opposite the hilum and usually with a rounded, concave area on each face, creating a bilobed cross-section), 1.5–2 mm diameter and 1.2–1.5 mm thick. Surface is reddish-brown, finely wrinkled at high magnification. 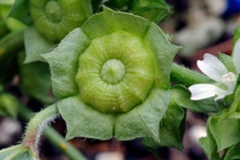 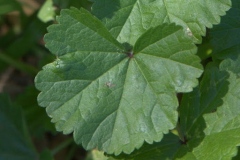 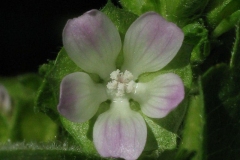 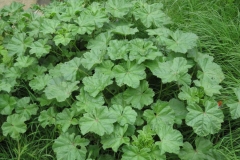 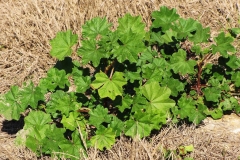 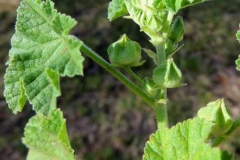 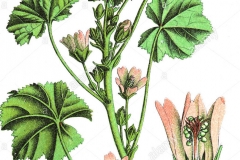 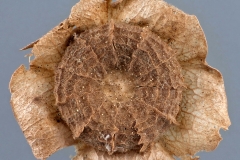 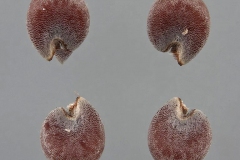 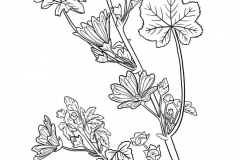 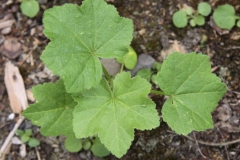 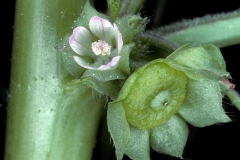 Cheeseweed extract are used in a number of numbing, insomnia, anxiety and stress medications, and even in the anesthetics that dentists use. Various components of the plant help calm the nervous system and encourage a sense of peace and relaxation. Cheeseweed demonstrated the effectiveness of its extract in the treatment of sleep disorders compared to the use of a drug similar to valium.

Cheeseweed may relieve any chest congestion or a respiratory condition. Cheeseweed can increase expectoration, which helps to clear out the respiratory tracts, but it also calms the throat and glands due to its anti-inflammatory aspects, while also promoting healing and more rapid recovery.

Chemicals from the Cheeseweed leaves help to speed healing, due to their rich vitamin content, but will also offer certain analgesic properties to the area, decreasing pain and discomfort. This analgesic ability of the Cheeseweed can be used in many ways throughout the body, both internally and externally. This also makes it a popular application in face masks or topical headache remedies.

Cheeseweed consists of polysaccharides with antiviral and antiseptic properties that help treat respiratory disorders and a chronic dry cough. Active ingredients of the plant help to remove mucus from the throat and have a calming effect in addition to their ability to treat asthma, bronchitis, emphysema, and other respiratory diseases.

Anti-inflammatory components of Cheeseweed are effective in treating a variety of skin problems. It is used to soothe rashes, wounds, burns, insect bites and eczema, since the polysaccharides, which nourish and soothe the skin, are also slightly anesthetic.

Cheeseweed extracts in various cosmetic products such as soaps, makeup, and skincare products are rich in components that fight free radicals which damage skin cells and cause wrinkles. Vitamin A gives the skin a radiant and younger look. It is also effective for hair care and is recommended for use in people with fragile hair.

Cheeseweed leaves consist of antibacterial and anti-inflammatory components that protect the gums and oral cavity from diseases and infection. Polyphenols present in the plant prevent the development of bacterial plaque by their ability to fight free radicals. Using Cheeseweed tea as a mouthwash may be a natural and effective way to treat the health of the oral cavity regularly.

Cheeseweed is rich in chlorophyll, a green, anti-carcinogenic pigment that cleans our internal organs. It is preventing and healing prostate cancer. Cheeseweed has a substance called beta-sitosterol, which is known for its ability to prevent tumors in the prostate gland. Cheeseweed can be used as a preventative measure for people at risk of developing this cancer.

Cheese weed’s polysaccharide mucilage causes relaxation and lubrication of the intestinal walls and better absorption of food. This substance also helps to reduce gastric acidity which causes stomach discomfort. Eating Cheeseweed or consuming it as a tea infusion helps people who suffer from constipation, irritable stomach, and intestinal cramps and need a soothing supplement.

Cheeseweed is an excellent alternative to treat burning sensations, frequency, and urgency in urination and pain in the lower abdomen because it has an anti-inflammatory component. It is a diuretic that helps clean up waste from the kidneys and prevents the development of stones in them.

Cheeseweed may regulate the digestive system and relieve any strain on that organ system.

Cheeseweed can boost the immune system by preventing bacterial infections and other foreign agents to affect those wounded areas.

Cheeseweed can be very effective for reducing inflammation and swelling, while also stimulating more rapid healing.

Traditional uses and benefits of Cheeseweed