Trending
You are at:Home»Herbs and Spices»Important facts about Grey Sallow 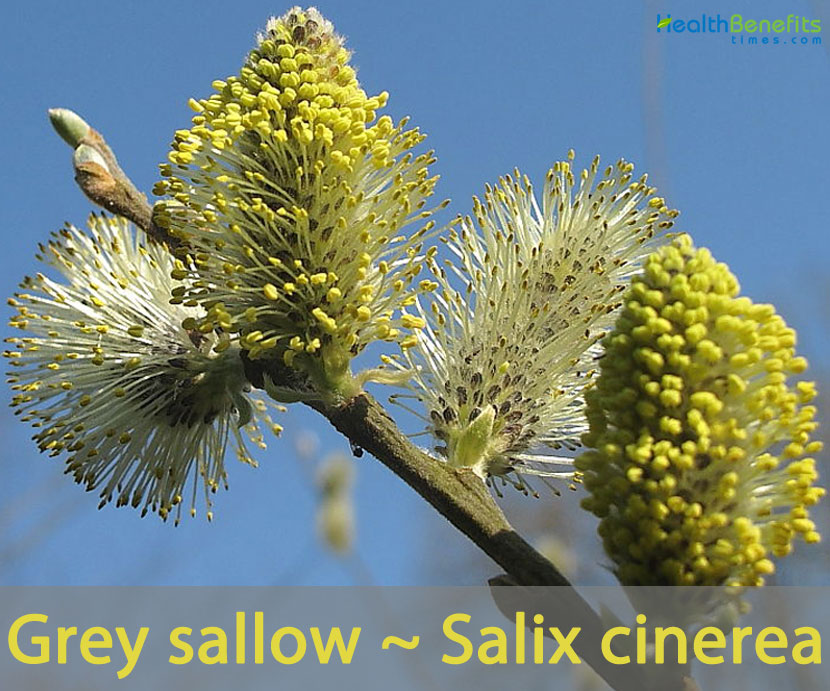 Salix cinerea popularly known as common sallow, grey sallow or grey willow is a species of willow belonging to Salicaceae (Willow family). The plant is native to Europe, including Britain, from Scandanavia south and east to France, Siberia and Iran and also Russia and western Asia (i.e. Turkey, Azerbaijan and Kazakhstan). Apart from gray sallow it is also known as grey willow, large gray willow, common sallow, grey sallow, grey-leaved sallow, large grey willow, and pussy willow, rusty sallow and European gray willow.  The plant offers a great deal of nectar for pollinators. It was rated in the top 10, with a ranking of second place, for most nectar production (nectar per unit cover per year) in a UK plants survey conducted by the AgriLand project which is supported by the UK Insect Pollinators Initiative.

The bark on the stems is smooth and greyish-brown in color, but eventually becomes fissured with age. Younger stems are green, greenish-brown or dark reddish-brown in color and may be hairy (i.e. pubescent) or virtually hairless (i.e. sub-glabrous).

The alternately arranged leaves are borne on short stalks about 2-5 mm long. These leaves are 0.8-3.5 in (2-9 cm) long and 0.4-1.2 in (1-3 cm) wide and are oval (i.e. elliptic) or egg-shaped in outline (i.e. obovate) with entire to finely toothed (i.e. serrulate) margins and shortly-pointed tips (i.e. acute apices). Their upper surfaces are bright green and sparsely hairy (i.e. sparsely pubescent), while their undersides are pale green or bluish-green (i.e. glaucous) and more densely hairy (i.e. densely pubescent).

Separate male and female flowers are usually borne on separate plants (i.e. this species is dioecious), but may occasionally be present on different parts of the same plant (i.e. rarely monoecious). Both types of flowers are inconspicuous and are densely arranged in stalk less clusters (i.e. sessile catkins) in the upper leaf forks. They do not have any sepals or petals, but each flower is subtended by a small bract. The male flowers are green or greenish-yellow in color and borne in relatively short clusters that are 2-3 cm long and about 2 cm across. They are about 10 mm long and consist of two or more yellow stamens. The female flowers are mostly green in color and are usually borne in slightly longer clusters that are 2-4 cm long. They consist of an ovary topped with a stigma. Female flowers are longer and narrower than the male. Flowers are produced before the new leaves in early spring. Flowering normally takes place in between March and April. 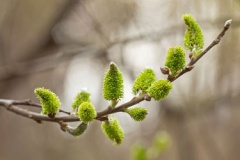 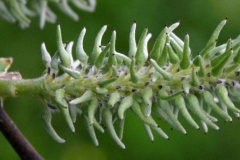 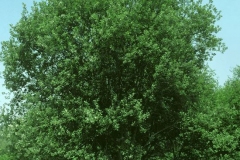 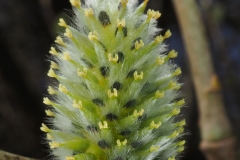 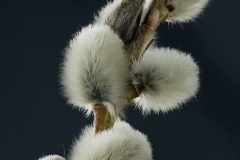 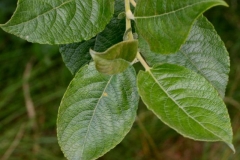 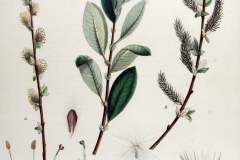 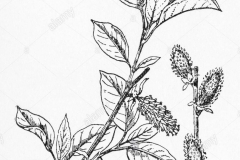 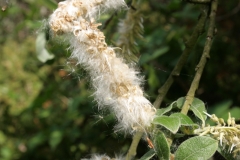 Once pollinated by wind, female flowers are followed by a small grayish green and densely hairy capsule with two valves that is up to 10 mm long containing several tiny seeds. These seeds, which are topped with a tuft of silky hairs, are shed about four weeks after flowering. Small size of the seeds along with the hairs helps in the dispersing. The seeds need bare soil to germinate.

There are two subspecies:

It is found in Central and Eastern Europe and western Asia. It is a shrub about 4–6 m (rarely 10 m) tall, with smooth bark. Leaves are densely hairy below with pale yellow-grey hairs. Stipules are large, persistent until autumn.

It is found in Western Europe and northwest Africa. It is a shrub or tree about 10–15 m tall, with furrowed bark. Leaves are thinly hairy below with dark red-brown hairs. Stipules are small and early deciduous.

Cremer gives a brief overview of a variety of mechanical control procedures that can be used in the control of smaller infestations of S. cinerea and other willow species but for larger invasions chemical methods will yield best results. The author reports that S. cinerea less than 1 meter tall and few in number can be pulled out by hand. Roots that remain do not sucker but buried portions of stems may take root and must also be pulled out. Use of heavy machinery can be effective but is not advisable on wet sites if the accidental incorporation of broken, live branches into the ground cannot be kept to a minimum. S. Cinerea can be felled, but except for some large, old willows the remaining stump usually coppices (produces shoots). The green crowns can be burnt immediately after felling (fire restrictions permitting). Burning may be an option if the tree can be completely girdled by fire at ground level; however young trees tend to sprout from the buried portion of their stem. Grazing can retard young S. Cinerea growth but will rarely kill the plant.

Cremer report that, the main method of controlling S. Cinerea is injection of stems with the weedicide Glyphosate. Painting of freshly cut stems with Glyphosate is particularly effective and the spraying of foliage of shorter plants (< 2m tall) is often effective as well. S. Cinerea can occasionally be resistant to this treatment of painting freshly cut stems and may need to be painted several times. Effectiveness is increased if the bark is also sprayed if it is thin or stripped if it is thick (Cremer, 1999).

The introduction of a biological agent has been considered for control of S. Cinerea in New Zealand, but opposition to the intentional introduction of further nonnative organisms is likely. As other countries explore the possibilities of biological control agents, similar opposition will most likely arise also.

Harman has researched and identified a varying number of possible biological control agents for S. Cinerea. The author gives a brief introduction and background on these species and while many species appear promising, extensive research is needed before any agent is ever released. First, each varying degrees of research must be conducted to determine which species have a narrow host range. This is critical to the success of a biological control program for S. Cinerea in New Zealand. There are many Salix hybrids that are beneficial and are used extensively for riverbank protection and soil stabilization and any introduced agent must be specific enough to not damage desirable hybrids and other species present in New Zealand.