Trending
You are at:Home»Herbs and Spices»Traditional uses and benefits of Cherry Laurel 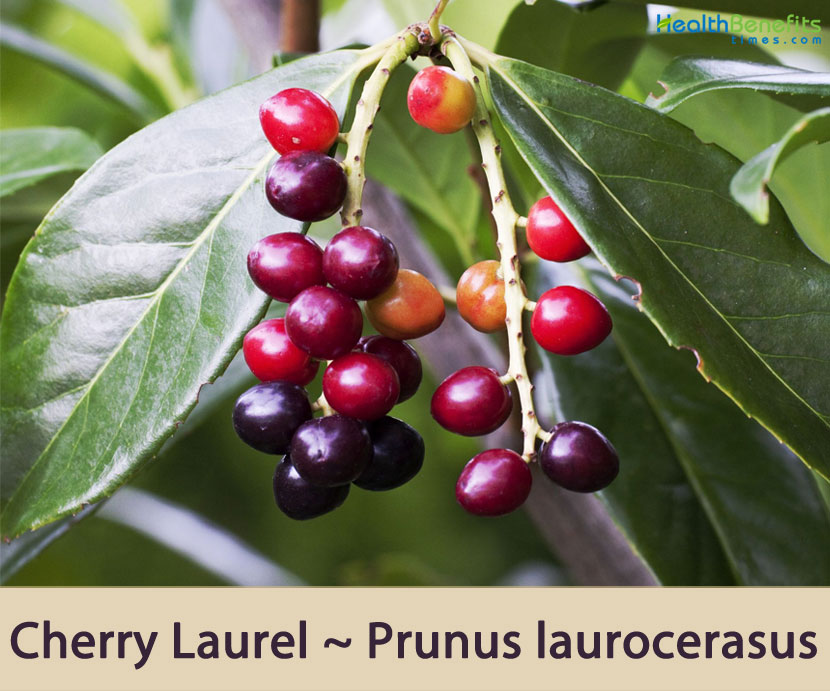 Prunus laurocerasus, also known as cherry laurel, common laurel is an evergreen species of cherry (Prunus) belonging to Lamiaceae / Labiatae (Mint family). The plant is native to regions bordering the Black Sea in southwestern Asia (i.e. northern Iran, Turkey, Armenia, Azerbaijan, Georgia and southern Russia) and southeastern Europe, from Albania and Bulgaria east through Turkey to the Caucasus Mountains and northern Iran. This plant is commonly found in urban forests in King County, Washington and can also be found escaping into more remote areas, usually spread by yard waste dumping or by birds eating the plant’s cherry-like fruits (which are not palatable to people, and can be poisonous).Cherry laurel, common cherry laurel, common laurel, English laurel, laurel and laurel cherry are some of the popular common names of the plant.

Genus name Prunus comes from Latin means plum or cherry tree. Specific epithet laurocerasus means laurel cherry in reference to its laurel-like evergreen leaves and cherry-like fruit. The common names refer to the similarity of foliage and appearance to bay laurel (Laurus nobilis), and like the bay laurel, Prunus laurocerasus was used for making laurel wreaths, but the two plants are not closely related. It is not to be confused with its American relative Prunus caroliniana, which is also called cherry laurel. Cherry Laurel plants are pretty easy to grow for every type of gardener. They are tolerant of extreme light conditions, drought, aerosol salt, and even neglect. The plant is harvested from the wild for local use as a food, medicine and source of materials. The plant is widely grown as an ornamental, where selected cultivars can be used as ground cover or hedging.

Cherry laurel is a tall, spreading, thicket-forming evergreen shrub or small to medium-sized tree that normally grows about 5 to 15 meters (16 to 49 ft.) tall, rarely to 18 meters (59 ft.), with a trunk up to 60 cm broad. The plant is found growing in fields, forest edge, plantations, roadsides, waste lots, riparian thickets, shaded ravines, understory of urban and second-growth forests, damp to wet sclerophyll forest, cool montane forest and other disturbed areas. The plant prefers a damp but well-drained moisture retentive soil that is rich in nutrients. It grows well in heavy clay soils and thrives in a loamy soil, doing well on limestone. It prefers some chalk in the soil but it is apt to become chlorotic if too much is present, growing badly on shallow chalk. It is extremely tolerant of shade; it succeeds in the dense shade of trees with almost no direct light and in their drip line. The plant has green bark which has cherry-like aroma when bruised.

The leaves are thick, leathery, shiny, alternate, on short, thick stalks, oblong-ovate, from 3-8 in. (7.6-20.3 cm) long, growing narrower at each end, and with a slightly serrate margin. The dark green upper surface is smooth and shining and the under one much paler, dull, and the midrib very prominent. There are glandular depressions and hairs near the base. The leaves can have the scent of almonds when crushed. Leaves are evergreen with no fall color.

The flower buds appear in early spring and open in early summer in erect, oblong 7–15 cm racemes of 30–40 flowers. Each cup-shaped flower is 1 cm across with five small cream to white petals and numerous yellowish stamens and grows in small clusters. Flowers have a powerful aroma. The blooming period occurs from April to May.

Fertile flowers are followed by small cherries and grow in clusters like grapes. The fruits are 0.3 to 0.7 inches (1-2 cm) in diameter, turning black when ripe in early autumn. This fruit is basically inedible for humans (bitter aftertaste) but is loved by local bird populations. It is similar in shape and structure to a black cherry, the odor of hydrocyanic acid may be detected in almost all parts of the tree and especially in the leaves when bruised. 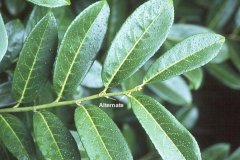 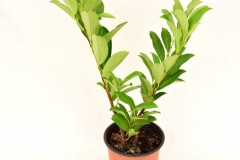 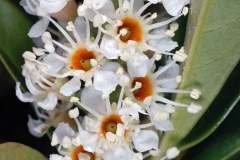 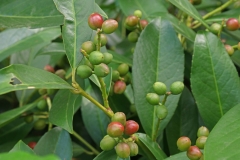 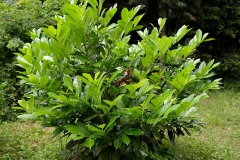 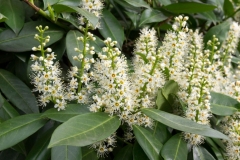 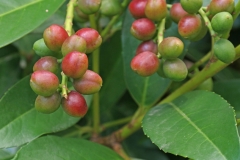 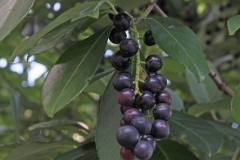 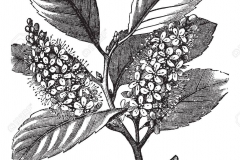 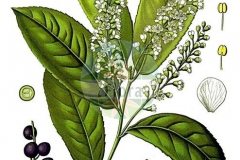 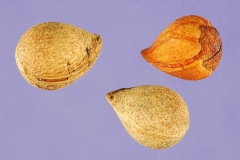 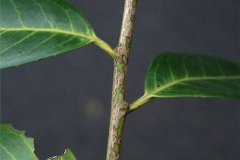 It is described by Loudon as a more dwarf-growing plant, which seldom flowers. Leaves are about one-third as wide as in the normal form, i.e., scarcely 1 in. wide.

It has a leaves of ordinary size, but curled and twisted. It is curious, but not ornamental.

It is a vigorous, erect shrub with more or less elliptic leaves up to 7 in. long, about 3 in. wide, deep green. It is considered as one of the finest variety.

Its leaves are about the ordinary size, but the habit dwarf and close. It is introduced to Kew from Transon’s nurseries, Orleans.

It is a dense erect shrub with narrow elliptic leaves up to 6 in. long, 1{3/4} in. wide, tapered at the apex, glossy. It is a very hardy and a good hedging plant raised in Germany.

It is considered as one of the finest of all the varieties in foliage, the largest leaves 10 to 12 in. long, 3 to 4{1/2} in. wide. It is a strong grower, it may, if desired, be trained into tree form by tying up a lead and gradually removing the lower branches.

It is of spreading, more or less horizontal habit, with dark green leaves up to 5{1/2} in. long, 2 in. or slightly more wide. It was introduced by Späth’s nurseries from the Balkans and put into commerce around 1900.

Leaves are large and broad, but not remarkable for size so much as for their dark, almost black, lustrous green. The plant is of more compact habit than most varieties. Leaves are dark green, about 4 in. long, slightly under 1 in. wide, tapered at both ends, tips slightly acuminate.

It is a dwarf, narrow-leaved form, the smallest leaves 1 in. long by {1/4} in. wide only, and the plant 1{1/2} to 2 ft. high. It may occasionally be seen reverting back to the typical form. This variety has apparently also been called angustifolia in gardens, though it is different from the ‘Angustifolia’ of Loudon.

Leaves are about half as broad as long and yellowish green. It is a tall growing variety.

It was originally found wild near the Shipka Pass in Bulgaria, north of Kazanlik, and introduced to cultivation by Späth about 1886. It has narrow, entire leaves, 2 to 4{1/2} in. long, {3/4} to 1{1/2} in. wide, and a certain elegance of habit, but is not as ornamental as some of the larger-leaved varieties. Its great value is its extreme hardiness. It will withstand winters where no cherry laurel has been known to do so before, such as N. Germany and parts of N. America.

Leaves are entire, narrow, and almost willow-like, the branches growing rather stiffly and obliquely upwards. It is very free flowering and valuable as a specimen or for ground-cover, retaining its low habit even in shade. It attains a width of 12 ft. or even more, but is usually less than 3 ft. in height.

Listed below are few of the measures for controlling Cherry laurel