Trending
You are at:Home»Herbs and Spices»China Root facts and health benefits 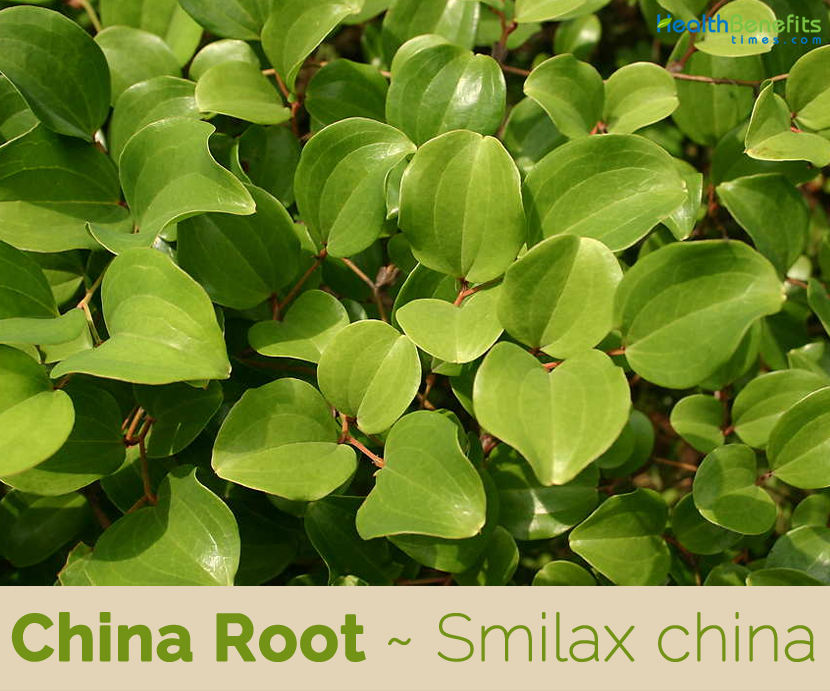 Chobchini or China root scientifically known as Smilax china has been used for ages in numerous tribal and folk medicine for a large number of health issues. Chobchini is hailed as a wonder medicine in Ayurveda and Unani too. The plant is native to China, Korea, Taiwan, Japan (including Ryukyu and Bonin Islands), Philippines, Vietnam, Thailand, Myanmar, and Assam. Root or rhizome of Smilax is used in herbal formulations in several parts of the world. China cultivates this drug in large amount and for most of the countries it is exported from there. Hence it is usually recognized as China Root. It is a plant species in the genus Smilax and Smilacaceae (Catbrier family). Some of the popular common names of the plants are China root, Chinese smilax and Bamboo Briar Root.

It is an Ayurvedic herb, quite interestingly this herbal root got famous in the treatment while treating the Gout of King Charles V. Roots are the most common used part. Stems are also equally beneficial. The rhizome of Chobchini can be used in the form of powder or paste, cooked or raw. The daily intake should not exceed 10 grams a day, as heavy dosage may result in nausea and vomiting. The most important medicinal properties of Chobchini however, are its ability to fight psoriasis, syphilis and leprosy. It is a preferred herbal treatment for psoriasis.

China root is a hard tendril climbing vine that grows up to 5 meter long. The plant is found growing in shrub thickets in hills and mountains, forests, thickets, hillsides, grassy slopes, shaded places along valleys or streams from near sea level. It prefers moist, well-drained soil for better growth. The plant has hard, large, knotty, uneven rhizome, blackish externally, pale colored or whitish internally. Stem is woody, sparsely prickly, and 1–5 m (3 ft. 3 in–16 ft. 5 in) long.

Leaves are simple, alternate, elliptically oblong to sub-rounded, 5 to 8 centimeters long, 2.5 to 4 centimeters wide; those toward the end of the branches are much smaller and veined. Petioles are about 7 millimeters long, with adnate spiculate stipules which frequently are extended into tendrils.

The inflorescence is born in axil of young leaf, of one umbel of both sexes which 10-25 flowered, representing sub globose and base sub globose measuring 2-3 mm in diameter with many small bracteoles. The male flowers have sepals of yellowish green and measuring 3.5-4.5 x 1.5-2.5 mm. The stamens measure 3-4 mm. The filaments are filiform in shape. The female flowers have six staminodes. Flowers are followed by globose red berries that measures 0.6-1.5 cm in diameter and minutely white powdery.

Ayurveda and Unani doctors recommend China Root for white discharge or leucorrhea in women. It has been found to be quite effective in controlling the problem. China Root contains several medicinal properties including control of swellings (anti-inflammatory), removal of pus from wounds, promotion of urine (diuretic), bringing down high body temperature, removing gas (flatulence) and clearing bowels.