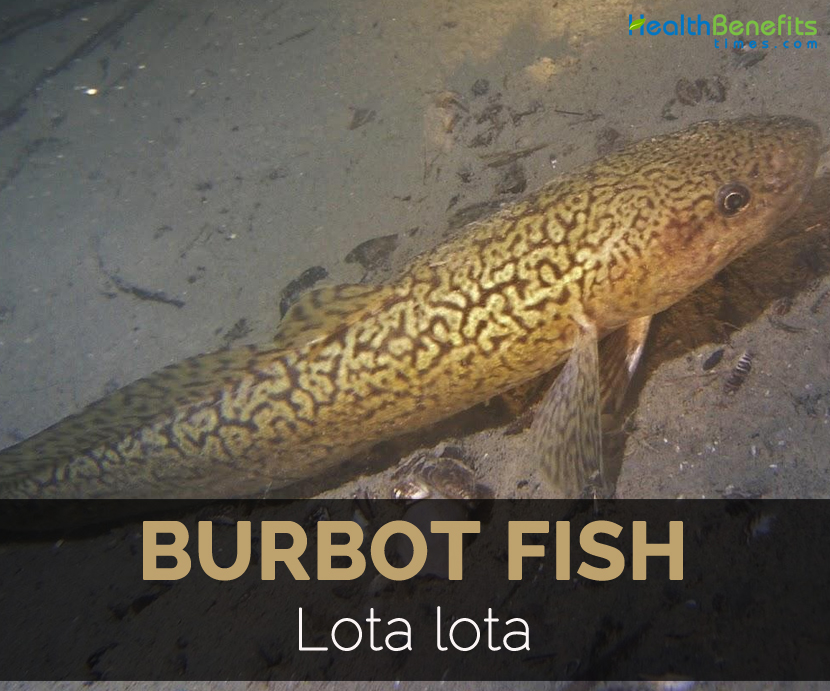 Burbot is considered to be the only cod species which lives in fresh water. It is usually found in clean deep lakes or clear moving water. The fish hides itself during day in depth, hollows or under stones. It hunts actively at night or dusk. While young, its diet is gammarids, insect larvae and water louse. After grown to 20-40 centimeters, the diet switches to fish. Some feeds on crayfish, insect larvae, mollusks and other invertebrates. The female matures at 3 years and males mature at 2 years in Central Europe. From November to March, spawning occurs at temperatures below 6°C in groups of up to 20 interlaced individuals that forms a ball about 60 cm in diameter which moves and rolls on bottom constantly while releasing eggs or sperms. It may undertake short spawning migrations. Eggs are about 1.2 to 1.8 mm in diameter, semipelgic and are slightly sticky hatching after 40 to 70 days. Larvae are positively phototactic which flows below surface in March and April. Zooplankton or drifting invertebrates are larvae feed on. It could be found in most Minnesota northern lakes and rivers such as Lake Superior but could be found in small numbers in prairie regions or parts of lower Mississippi. Basically, it requires temperature below 70 degrees during summer.

Burbot has color from yellow-brown to brown or even dark olive having black mottling or blotching that provides camouflage appearance. The pectoral fins and underbelly are pale to white. It has short dorsal fin and followed by long second dorsal fin about 6 times length of first and joined to rounded caudal fin. It has 67 to 96 soft dorsal rays with 58 to 79 soft anal rays. It resembles eel more than freshwater fish. It has slimy skin and small scales. Burbot grows 1.5 m in length and weighs 60 lbs in other areas of world. In Minnesota, it is under 8 lbs. or less than 28 inches in length. Burbot is featurized by single barbell that is located on the chin. It has cavernous and extensible mouth with thousands of sharp and small teeth like bass or catfish.

The breeding occurs once per year in the winter. It migrates to smaller stream or shallow water in order to spawn. Individually, Burbot moves to the spawning areas and males arrive before females. During the night spawning occurs when individuals form globular mass. Each fish are towards the center and release sperm or eggs. Spawning takes place in water, laying eggs in shallow water that hatches during spring. Usually reproduction occurs in pairs or sometimes in hundreds or dozens in shallow water over sand and gravel bottoms. After the eggs and sperm are released, the fish thrash about scattering eggs that falls to bottom later. A female could lay upto 1 million eggs that depend on her size. For 4 to 5 weeks, embryos develop in cold water hatch at the tiny size of .15 inches.

An average fecundity ranges eggs from 700,000 to 800,000. Eggs are spherical in shape and is amber, yellow and orange in color. Usually eggs hatch in 2 to 4 months.

Burbot lives in large lakes, cold rivers and reservoirs generally preferring freshwater habitats but does well in brackish environments for spawning. Burbot can live in Lake Superior at depths below 300 m (980 ft). Typically, they are found in colder water below thermocline during summer. They could tolerate cluster of sand, mud, rubble, silt, boulder and gravel for feeding. They are active crepuscular hunters. During winter months, its population is adfluvial and they migrate to near shore reefs or shoals to spawn favoring spawning grounds of sand or gravel.

Many fish such as yellow perch, smallmouth bass, lake trout, smelt and muskie prey young burbots. Humans are also regarded as a predator.