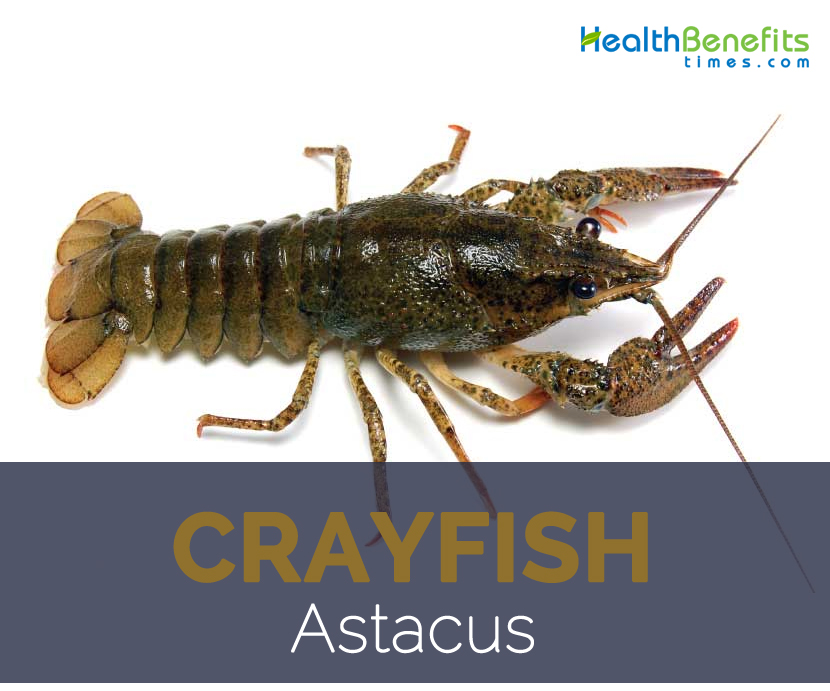 Crayfish, also known as crawfish, crawdads, freshwater lobsters, mountain lobsters, mudbugs or yabbies, are actually freshwater crustaceans resembling a smaller version of a lobster, to which they are related; taxonomically, they are members of the super families Astacoidea and Parastacoidea. They are small crustaceans that live in freshwater water habitats in which do not freeze over in cold conditions. Adult size is reached by crayfish in the wild in about 4 years. They can live from 20 to 30 years.

Crayfish are categorized by a joined head and thorax, or midsection, and a segmented body, which is sandy yellow, green, red, or dark brown in color. The head has a sharp snout, and the compound eyes are on movable stalks. The exoskeleton, or body covering, is thin but tough. The front pair of the five pairs of legs has large, powerful pincers (chelae). There are five pairs of smaller appendages on the abdomen, used mostly for swimming and circulating water for respiration. Their large anterior-most pairs of legs have powerful claws which are efficient tools for defense, food gathering, and object manipulation. Their four pairs of walking legs assist them in rapid locomotion across the bottom substrates of their aquatic habitats. Most adult crayfish are about 7.5 cm (3 inches) long. Among the smallest is the 2.5-cm-long Cambarellus diminutus of the southeastern United States and the largest is Astacopsis gouldi of Tasmania, which may reach 40 cm in length and weigh about 3.5 kg (8 pounds).

They breathe through feather-like gills. Some species are found in brooks and streams where there is running fresh water, while others thrive in swamps, ditches, and rice paddies. Crayfish feed on living and dead animals and plants. Rivers and brooks are the main living habitat for the crayfish due to their water clarity and thin ice conditions. Humans will rarely see crayfish during the day but if you shine a flashlight in the water at dark its a whole different story. These guys do their traveling and feeding during the darkest hours of the night. You will see them walking ever so slow to their destinations but when danger arises, the flap their strong tail and their gone in the blink of an eye.

Crayfish evolved from marine ancestors dating back some 280 million years. There are more than 300 species of crayfish worldwide, which are categorized into three families: the Astacidae, the Cambridae (found only in the Northern Hemisphere), and the Parastacidae. A few species have modified to tropical habitats, but most live in temperate regions. None occur in Africa or the Indian subcontinent, though one species is found in Madagascar. Crayfish live in water, hiding beneath rocks, logs, sand, mud, and vegetation. Some species dig burrows, constructing little chimneys from moist soil excavated from their tunnel and carried to the surface. Some terrestrial species spend their whole life below ground in burrows, emerging only to find a mate. Other species live both in their tunnels as well as venturing into open water. Many species live mostly in open water, retreating to their burrows during pregnancy and for protection from predators and cold weather.