Trending
You are at:Home»Herbs and Spices»Health benefits of Clary Sage 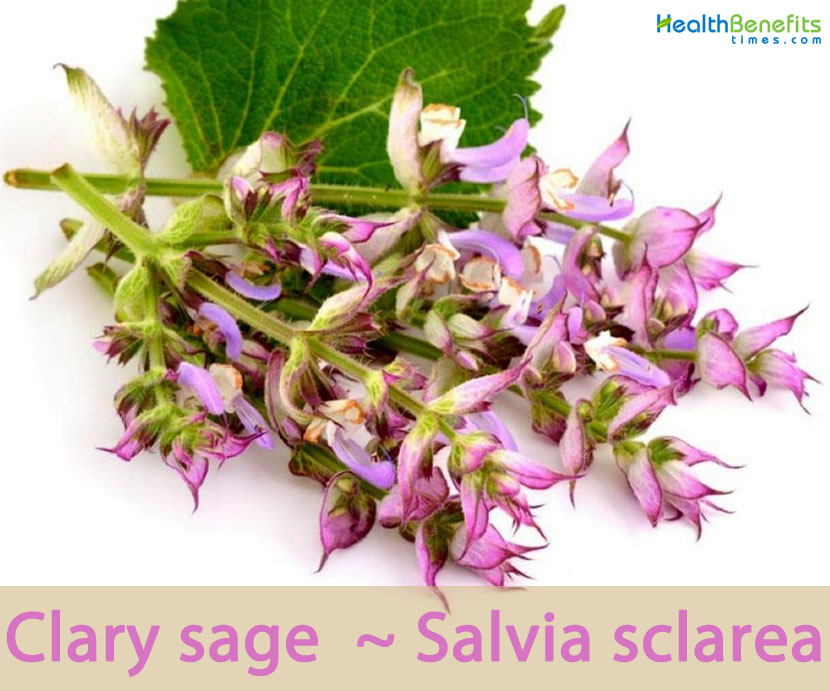 Salvia sclarea, also called clary or clary sage, is an herbaceous plant species of the genus Salvia and Lamiaceae / Labiatae (Mint family). The plant is native to Syria, Southern France, Italy, and Switzerland, also North Africa and Central Asia. Today it is cultivated worldwide, mostly within Europe, England, Morocco, Russia, and the United States. The plant has a lengthy history as an herb, and is currently grown for its essential oil. Clary, Europe sage, Clary sage, Salvia romana, European sage, Clear-eye, See-bright sage, garden clary and common clary are some of the popular common names of the plant. The genus name Salvia is derived from the Latin word salveo which means to save or heal, in reference to the purported medically curative properties attributed to some plants in the genus. Specific epithet comes from the Greek word skeria which means hardness in reference to the hard parts of the flower petals. Common name of clary comes from the Latin word clarus meaning clear in reference to the use of the oil as an eyewash to “clear” the eyes of inflammation and foreign materials.

Clary sage has a long history of use as a medicinal herb, but present uses are mostly as an herbal flavoring for foods, muscatel flavoring for wines, vermouths and liqueurs, and as an aromatic additive to soaps, perfumes and cosmetics. Flowers are occasionally used to make tea. Earlier medicinal usage includes use in the treatment of anxiety, certain menstrual issues, kidney diseases, muscle pains, insomnia, and digestive disorders. Similarly it is cultivated to extract the essential oil which is used to make perfumes. Makers of wines, liqueurs and vermouths also use the oil as muscatel flavoring for their products. Leaves are not only edible but also a useful ingredient in many cuisines. Leaves can be chopped and generously added to salads. They can also provide flavor and a rich sage aroma when added to many types of dishes, e.g. fritters. The plant is also useful in aromatherapy. It is currently listed as a Class A Noxious Weed in the State of Washington where it has been found to invade pastures, meadows and rangeland resulting in displacement of native plants.

Clary sage is a much-branched, upright, biennial or short lived herbaceous perennial plant that normally grows about 3 to 4 ft. (0.91 to 1.22 m) in height. The plant is found growing in rocky igneous slopes, mixed deciduous and coniferous woodland, shale banks, roadsides, fields and valleys. Stem is thick, square, erect stem, 20-120 cm high and branched toward the top. Stem is pubescent to hirsute, in the  upper  part  covered  by  glandular, gray  hairs  that  give  the  balsam fragrance. Annual leaves are in rosette, while biennial are arranged along the stem in pairs. Lower leaves are with petiole, 30 cm long and twice as long as the leaves located on the upper part of the stem; upper are sessile, ovate to obovate.  Simple and multicellular glandular trichomes are present on both sides of leaves. Leaves have a wrinkled texture and have toothed to double toothed margins.

Flowers are arranged in showy spikes of numerous 6-10-flowered distant verticillasters. Bracts or floral leaves are large, green, white or pink, membranous, cuspidate, as long as or longer than flowers. Flower-stalks are 2-3 mm, spreading-erect. Sepal cup is ovate-bell-shaped, about 1 cm in flower lengthening to about 1.3 cm in fruit, with glandular and eglandular hairs and stalk less glands. It also consists of upper lip with 3 spinulose teeth; lower lip with 2 narrow ovate spinulose teeth. Flowers are small, tubular, two-lipped, 2-3 cm, creamy white to lilac subtended by papery, white to pinkish-purple bracts. Upper lip is sickle-shaped, tube about 1 cm long. Stamens have an elongated connective and a sterile dolabriform lower theca. The plant has both male and female flowers (a hermaphrodite) which are mostly insect pollinated. Flowering normally takes place in between June to August. Flowers and foliage are very aromatic. The  flowers,  leaves and  stems of  the  clary  sage  are widely been used for food  application and  herbal tea as  antidiarrheal and  tranquillizer  drug in Turkish folk medicine.

Fertile flowers are followed by nearly 4 nutlets that are 3 mm long and 2 mm wide, round, scarcely trigonous, rounded pale brown with darker veins. Seeds are blackish brown, rounded to triangular contained in long, toothed husks. The seeds have had a very practical use since time immemorial. Seeds have a mucilaginous coat, which is why few old herbals recommended placing a seed into the eye of someone with a foreign object in it so that it could adhere to the object and make it easy to remove.

The distilled essential oil is used widely in perfumes and as a muscatel flavoring for vermouths, wines, and liquors. It is also used in aromatherapy for relieving anxiety and fear, and helping with insomnia. 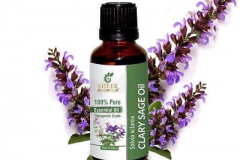 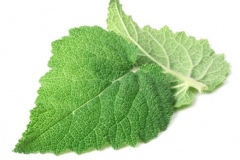 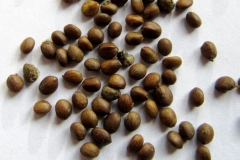 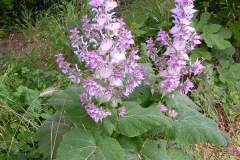 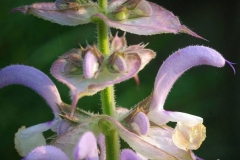 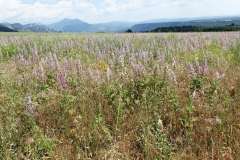 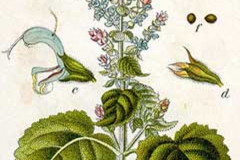 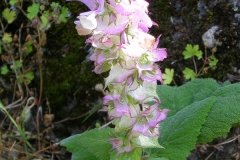 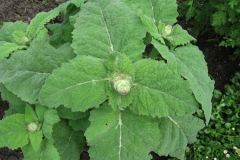 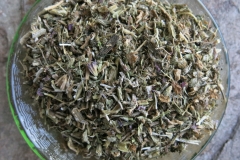 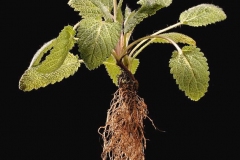 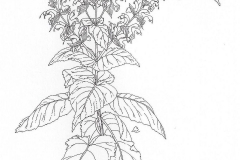 Clary sage was used for its medicinal properties all through the middle Ages in Europe. The 17th-century herbalist Nicholas Culpeper recommended dipping clary sage leaves in batter and frying them in butter. According to him, the fried leaves helped with back pain. He also warned about mixing the clary sage leaves with wine as he believed the combination acted as an aphrodisiac. Listed below are some of the well-known health benefits of Clary Sage

Clary Sage is rich in natural phytoestrogens compounds that mimic the effects of estrogen in the human body. The essential oil consists of sclareol – a compound that has an estrogen-like structure that not only mimics the effects of estrogen, it encourages the body to produce its own estrogen. Additionally, if there is not an estrogen deficiency, sclareol will not create more estrogen in the body – this is the wisdom of nature.

Research found that Clary Sage is effective at alleviating labor pain. Additionally, it was found to be effective in reducing the maternal anxiety and fear experienced in labor. Researchers found that the use of aromatherapy appeared to facilitate a reduction in the use of systemic opioids in the study center, from 6 percent in 1990 to 0.4 percent in 1997 (per woman).

Clary Sage has been the focus of numerous researches involved in determining the usefulness of essential oils as a natural cure to menopause symptoms. For instance, a 2014 study published in the “Journal of Phytotherapy Research” was carried out on 22 post-menopausal women who were diagnosed with depression. It reported that inhalation of Clary Sage essential oil reduced cortisol levels by 36 percent and improved thyroid hormone levels. The researchers concluded that Clary Sage essential oil “had a statistically significant effect on lowering cortisol and had an anti-depressant effect improving mood in post-menopausal women”.

Clary Sage oil is high in monoterpenes, monoterpenols, esters, ethers and sesquiterpenols – phytochemicals that help to reduce hot flushes by their hormone balancing effects and nervine properties. The natural phytoestrogens also help to slow the development of osteoporosis, a condition that poses an extra risk to menopausal women.

As a naturally sedative and relaxing essential oil, Clary Sage induces feelings of calmness and has been confirmed to reduce the stress hormone cortisol.

Clary Sage consists of several compounds that promote healthy, glowing skin. Clary Sage is anti-inflammatory, antioxidant and antibacterial, making it effective against acne, rosacea and other skin conditions. Always dilute the essential oil before applying it to skin. Research which carrier oils will benefit which particular skin conditions to create your own personal natural skincare range.

Due to its anti-inflammatory properties, a clary sage infusion is highly recommended in people with obesity, type 2 diabetes and overweight problems. There are currently a series of studies, for the moment in animals that have proven how the administration of this plant is able to counteract the inflammation that accompanies obesity and thus decreases the damage caused by inflammation (metabolic problems such as high cholesterol, damage to the arteries, etc.).

Ancient people used the seeds of Roman sage to clean the eyes. To do this they placed the seeds with honey under the eyelids and opened and closed the eye. However, this practice is not recommended, since the hard parts of the seeds can seriously injure the eye.

The medicinal part of the seeds is their mucilage, and these can be extracted by infusion. Therefore, to use clary sage as a remedy for the eyes, it is preferable to infuse the seeds and apply, cold, in the form of compresses on the eye, provided there is no medical contraindication or eye infection.

Hand-pulling or digging can be effective, particularly for small infestations. Be sure to dispose of plants properly and make sure all flower heads go in the trash to prevent new infestations.

Herbicide information is currently not included in the PNW Weed Management Handbook for clary sage but check back as this resource is continually being updated.